On Tuesday's CNN Tonight, host Don Lemon cued up author Michael Higginbothum to claim that there was "racial amnesia" and a "Jim Crow mentality" around white voters being willing to vote for Donald Trump in spite of him using "a lot of racial rhetoric" in the campaign. Higginbothum -- author of Ghosts of Jim Crow -- went on to liken modern times to the era after Reconstruction when former Confederates celebrated the Ku Klux Klan and denied that slavery was primarily to blame for the American Civil War.

At about 11:08 p.m ET, Lemon cited an article on CNN.com which tied Trump's election to "racial amnesia." Lemon: "There is a piece on CNN.com, and if you guys at home haven't read it, you should read it. This is where historians discuss Trump's winning being described as a revolt by white working class voters, but that it had little to do with racism or xenophobia. They're calling this 'racial amnesia.' What do you think about that?"

Higginbothum complained that there was "a lot of racial rhetoric" from Trump that many voters ignored which "should have prohibited those individuals from voting for" him:

Donald Trump ran a very divisive campaign where he used a lot of racial rhetoric. And that, you know, people voted for Trump for many reasons, but I think some voted for him because that racial rhetoric appealed to them.

After Lemon injected, "Yeah," Higginbothum worried: "And to me that's very unfortunate because that reflects a Jim Crow mentality from days gone by." 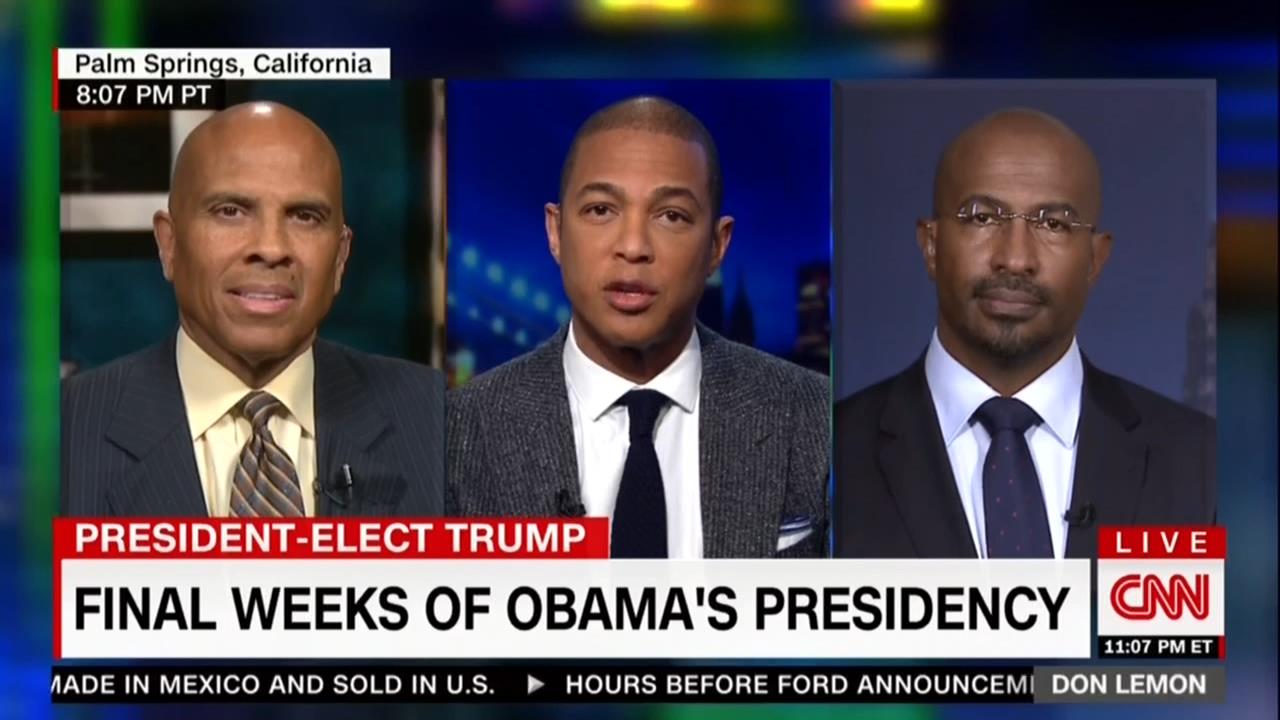 The CNN host then brought up the behavior of former Confederates after the Civil War who denied slavery's involvement in the Civil War:

The article goes on to say that this is -- this "racial amnesia," as they call it, is similar to what we saw after the Civil War where defeated Confederates argued the Civil War was about states' rights and not slavery. Are we seeing a rewriting of history now, Michael?

The liberal author invoked the Ku Klux Klan as he responded:

I think we are, and the comparisons are fascinating and, I think, very accurate. Birth of a Nation, which most individual Americans know about, it was a rewriting of history about Reconstruction, basically glorifying the Ku Klux Klan and suggesting that they were the saviors of the South rather than a racist, terrorist organization. And I think we're seeing that to an extent to today with the denial about the significance of race for some Trump supporters.

Remember, Trump ran a very divisive campaign on race. He initially, when he announced, he talked about Mexican immigrants as criminals and rapists. He talked about a Muslim ban for all Muslims coming to America, you know, he, I mean, these were clearly racist notions. And unfortunately it resonated with some Americans.

The article referenced by Lemon, posted on December 28 by John Blake, titled, "How Trump's Victory Turns into Another 'Lost Cause,'" portrays white Americans as wanting to sweep under the rug some of the racism in America's history and invokes former Confederates who tried to downplay the role of slavery in the motivations for the South fighting the Civil War.

If one goes to the site, a video posted to accompany the article initially displays an image of a man -- who could easily be a Democrat crashing a Trump rally -- holding up a sign reading "KKK 4 Trump." The first couple of lines of the article read:

After President-elect Donald Trump's recent victory, some of his supporters celebrated by flying Confederate battle flags from pickup trucks and waving them at rallies. But Trump's victory may mark the resurgence of the Old South in another more sinister way: The return of "racial amnesia."

After recalling that Trump supporters argue racism had little to do with the GOP candidate being elected, Blake continues:

People making this argument are following a script first honed by another group of Americans who made history disappear. After the Civil War, "Lost Cause" propagandists from the Confederacy argued the war wasn't over slavery -- it was a constitutional clash over states' rights; they said: hatred toward blacks had nothing to do with it.

The article soon continues: "It worked then, and some historians say it could work again with Trump."

After citing MRC alumnus Matt Vespa -- currently associate editor at Townhall.com -- as arguing against the view that Trump voters were motivated by racism, the article dismissively enters a new section titled, "How White America Became Good at Forgetting," which begins:

At first glance, comparing some Trump supporters to ex-Confederates may seem absurd, even insulting. But historians say both groups developed an uncanny ability to obscure the role race played in transformative events and to persuade millions of Americans to go along with the charade.

The article adds: "You don't have to pick on the South, though, to pick on racial amnesia. Racism is embedded in the daily lives of ordinary Americans in ways that many forget."

The article then recalls whites moving or sending their children to private schools after racial segregation of public schools was banned.

Later in the article, under the title "The Wolf at the Door," Blake even takes aim at white liberals and accuses them of harboring racist sentiments that awaken under the right circumstances:

There is some evidence, though, that explains how a white voter who supported Obama can still be driven by racial resentment. A recent experiment suggests that even white liberals' racial attitudes shift when they perceive people of color moving into their area.

The article then cites a 2012 Harvard University study concluding that whites in liberal Boston become more anti-immigration after immigrants start riding on the same train with them.

As the article comes to its conclusion, after fretting over those who would deny racism's role in Trump's election, Blake suggested that if such an argument is accepted, it would be analogous to the Lost Cause movement of ex-Confederates to rewrite history:

Will facing what Trump's victory says about America be too monstrous to bear? If that happens, Trump's road to the White House won't just be a story about an astounding presidential victory. It could become another Lost Cause.