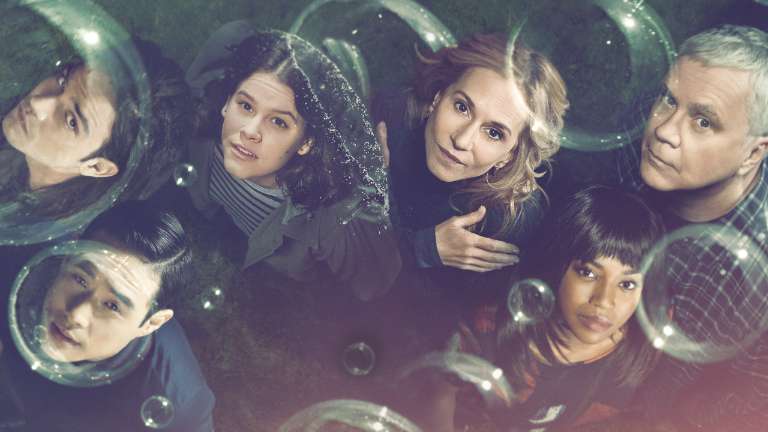 Have you been looking to close out your weekend with a program that is insufferable and self-satisfied beyond measure? Then, boy, does HBO have the show for you!

Here and Now premiered February 11 with its pilot episode "Eleven, Eleven," which introduced us to the painfully enlightened Bayer-Boatwright family. If you wonder how much of a cliche the show is, it opens with a dude in a man bun riding his bike down the streets of Portland. Of course.

So, let's meet the family.

The patriarch is Greg Boatwright (lefty actor/activist Tim Robbins), also known as "H. Gregory Boatwright, Assistant Chair of the Philosophy Department" at an as-yet-unnamed university. It's the day of his 60th birthday party and he's in the midst of a midlife crisis, if his weekly visits to a prostitute are any indication. He is pressured into giving a speech at his party and let's just say it doesn't go well:

Greg: When I was young, I thought the purpose of life was to seek enlightenment, to use our minds, to try to imagine a better future... Bring light into the darkness. To reject fear and despair and cynicism... to honor intelligence and reason... to choose love. Love? I feel embarrassed even articulating that, because I look at the world... not even the world. Here, now, and all I see is ignorance, hatred, terror, and rage. We lost, folks. We lost. I look back on my partnership with this amazing woman and this great experiment that is our family and I wonder, I really do wonder, "Did any of it make any difference?"

If I understand correctly, Donald Trump won and it ruined his entire life and made his family meaningless to him? I also find it creepy that he looks at his family as an experiment, but it seems fairly clear that this is what he and his wife were doing when they adopted children from around the world, choosing countries that, as their son Duc Bayer-Boatright (Raymond Lee) put it, "America totally fucked."

In fact, Duc and oldest daughter Ashley (Jerrika Hinton) explain some of the family dynamics to Ashley's coworker Randy through their description of their college aged brother Ramon, aka "Baby Jesus."

Ashley: Our brother, Baby Jesus, is from Colombia.
Randy: Your brother is not named Baby Jesus.
Duc: Well, we always called him that because our parents thought he was perfect.
Ashley: Still do.
Duc: Yeah, she never had to teach him how to speak English.
Ashley: Or learn how to deal with his fucking hair.
Duc: Although, what's going on with his hair? It's fucking--
Ashley: Uh-uh. He just-- He passed for white, right, since day one.
Duc: Well, he is white.
Ashley: White white. Yeah. Wasp white, like Mom and Dad. It just made things so much easier for them.
Duc: Yeah, and they just... relaxed. They became different people.
Ashley: Yeah, he never had to wear Colombian flag T-shirts or... serve Colombian food at his birthday parties.
Duc:He never had to do anything he didn't want to do.
Ashley: Uh-uh. But we're not bitter.
Duc: No.
Randy: Yeah, but it must be cool, having siblings from these exotic places.
Duc: It could've been, if we weren't so aware of being advertisements for how progressive and evolved our parents were.
Ashley: Mmm, How evolved she was. He never cared as much. He didn't.
Randy: So, Vietnam...
Duc: Mm-hmm.
Randy: And Lie-- Lib-- Libya? Libya.
Ashley: Liberia. And Colombia.
Duc: All places America totally fucked.
Ashley: We also have a little sister who's their biological child. She is painfully white, like you.

So, we know that matriarch Audrey Bayer (Holly Hunter) is the one who is especially into being "progressive and evolved." She met her husband in the 1980s at a disarmament protest. She talks openly with her kids about past recreational drug use like it was just a cool thing she did and is a fairly one-dimensional combative feminist henpecking her husband and kids in middle age.

I loved that line by Duc about how Audrey used the kids as an advertisement for being progressive and evolved, because we all know the virtue-signaling of the American liberal. Duc is fairly insufferable, too, though. The man works as a "motivational architect," which is a more annoying way to say "life coach," which is already an annoying thing to say. He's also celibate for some unknown reason.

Oldest daughter Ashley (Jerrika Hinton) was originally named Subeedo by Greg and Audrey, but, she explains, "On my 18th birthday, I had it legally changed to the whitest name I could think of." In her job running a retail clothing website, she picks up a hot male model named Randy at work (that's who they're hanging out with in the clip above) because he tells her he has drugs then has her husband, Malcolm, get their daughter ready for the big 60th birthday party and meet them there. Yes, she brings the model with her. Duc finally tells Randy that Ashley is not going to have sex with him because she actually cares about her husband and "Ashley likes to play near fire, without ever getting close enough to actually get burned."

Audrey hates Malcolm and would be delighted for Ashley to set her marriage on fire because, as Duc once again exposits, "I think she married him to piss our mom off. He was a Republican... You know, before Trump." It's almost as though that line is supposed to give viewers permission to like Malcolm since he's not one of those Republicans. He's actually a great guy, helping with the kids, showing up to the party early to help a mother-in-law who treats him like garbage. It's the progressives who think the world revolve around them in this show (and in real life). So, with Ashley spending time with her actual husband, what is Randy going to do during this party? You're going to wish you hadn't asked.

Kristen Bayer-Boatwright (Sosie Bacon) is, as a high schooler, the youngest of the family. She's also the only biological child. Anyway, Kristen decides that she would like to lose her virginity in the middle of her dad's 60th birthday party and chooses Randy, a complete stranger, who is, apparently, cool with taking a teenager's virginity. As if none of this was odd enough, she introduces herself while wearing a horse's head mask and wears it through their entire sexual encounter. He never even mentions the fact that she is walking around in a horse head mask, so I guess he is pretty odd, too. She's supposedly just wearing it to be silly but, as she told her brother Ramon Bayer-Boatwright (Daniel Zavatto), she doesn't feel as special as the other siblings because she is just...white. She is in the midst of getting her DNA tested "'cause maybe there's a tiny percentage of something interesting in there."

For those of you keeping tabs, that means that they have a child from every major racial category, but what else is missing? That's right - a gay child. Well, worry no more, because Ramon is gay! In fact, he gets a new fella in this very episode who he decides will be the first man he ever brings home to his parents except, on the way to the birthday party, they have to stop for sex. They get to the party eventually and Ramon starts to hallucinate during his dad's speech. That's right - it looks like he also has a mental illness. It's as though the writers realized they still has a few social justice boxes to check and threw them all at poor old Ramon.

So, that's it. That's the Bayer-Boatwright family. Can you think of a worse way to spend your Sunday evening than with these people?