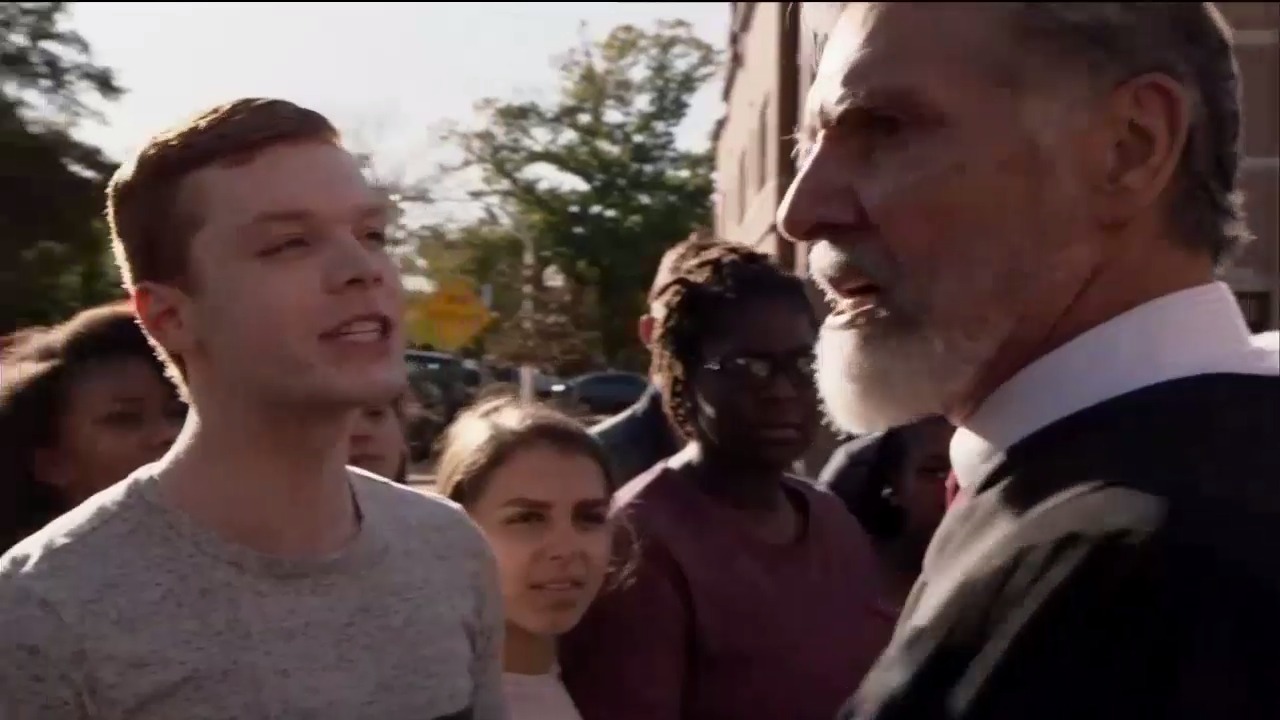 Showtime's Shameless doesn't always live up to its name but, when it does, it really, really does. In the January 7 episode, "The Fugees," gay activist Ian Gallagher (Cameron Monaghan) is taking on Christians all over Chicago, shouting lewd things at leaders and congregations alike, which doesn't seem like the most effective way to change minds. Meanwhile, on a trip to Canada, Frank learns to love America again.

After a video of Ian's confrontation with the first pastor went viral, he is something of a hero to Chicago's gay community. A couple of religious leaders have also come to him for help. When Ian tells one, "My message is, Jesus is nonbinary, so deal with it, Deacon," he replies,"We support an inclusive vision, son. We're not here to contradict you." However, there are still plenty of religious leaders around Chicago who do contradict him, and he's not having it.

When he goes into a church that is praying over a gay man, trying to make him straight, he is physically removed. The difference is that, unlike in his first confrontation, he only had Trevor (Elliot Fletcher), but now he has an angry gay mob at his disposal, and he comes back with them. They stand outside the church chanting things that aren't going to get anybody on their side.

Ian worked as an EMT in the past, so he knows just what to do when the priest has a medical issue when they are screaming obscenities in his face. It would be nice if he wasn't a jerk about it when said priest regained consciousness, but that's just not how Ian rolls.

Like so much discourse, it would be nice if these groups could speak to each other instead of yelling at each other. In Ian's case, he and his group are trying to be as offensive as they possibly can while claiming to be the authority on Jesus' love. WWJD? I'm pretty confident "screaming obscenities at the other guy" isn't on the list.

Ian counsels one lesbian, saying, "They tell you that Jesus had all these messed-up ideas, but the truth is that you fucking girls is exactly what Jesus wants you to do, because that's love and Jesus is love. You know, most of the assholes are closeted gays anyway. They wish they were as free as you."

As you may recall, Gallagher family patriarch Frank (William H. Macy) has been making a living by sneaking "brown people" out of America and into Canada, then buying cheap prescription drugs in Canada and bringing them back to his friends in Chicago. Why does he have to smuggle them into Canada? Because they can't get past Canadian border security, which Frank has been able to avoid until this episode. See, everybody? America isn't the only country with border security, we just seem to be the only country that catches flack for it.

He tried explaining to the Mounties that arrested him, "Health care in the States rapes the elderly and the poor. Our way's the only way some grandpa's not gonna keel over from leukemia before his 90th birthday. Or a kid in some tenement doesn't stop breathing after a peanut butter sandwich." Delightful propaganda. In the course of escaping from the Mounties, taking refuge in a cabin, trying to steal (and falling off of) a horse and finally getting home, Frank comes to appreciate America - sort of.

Frank realizes he's in America when he finds himself in a Costco parking lot. "I'm home. I'm home! I'm home," he cries: "Overweight minimum wage workers buying discount laundry detergent! I have missed you so much! God bless America! God bless America!" When he gets to his local bar with is friends, he tells them of Canada, "I have traveled through the depths of hell."

Like I said, Shameless really lived up to its name this week.