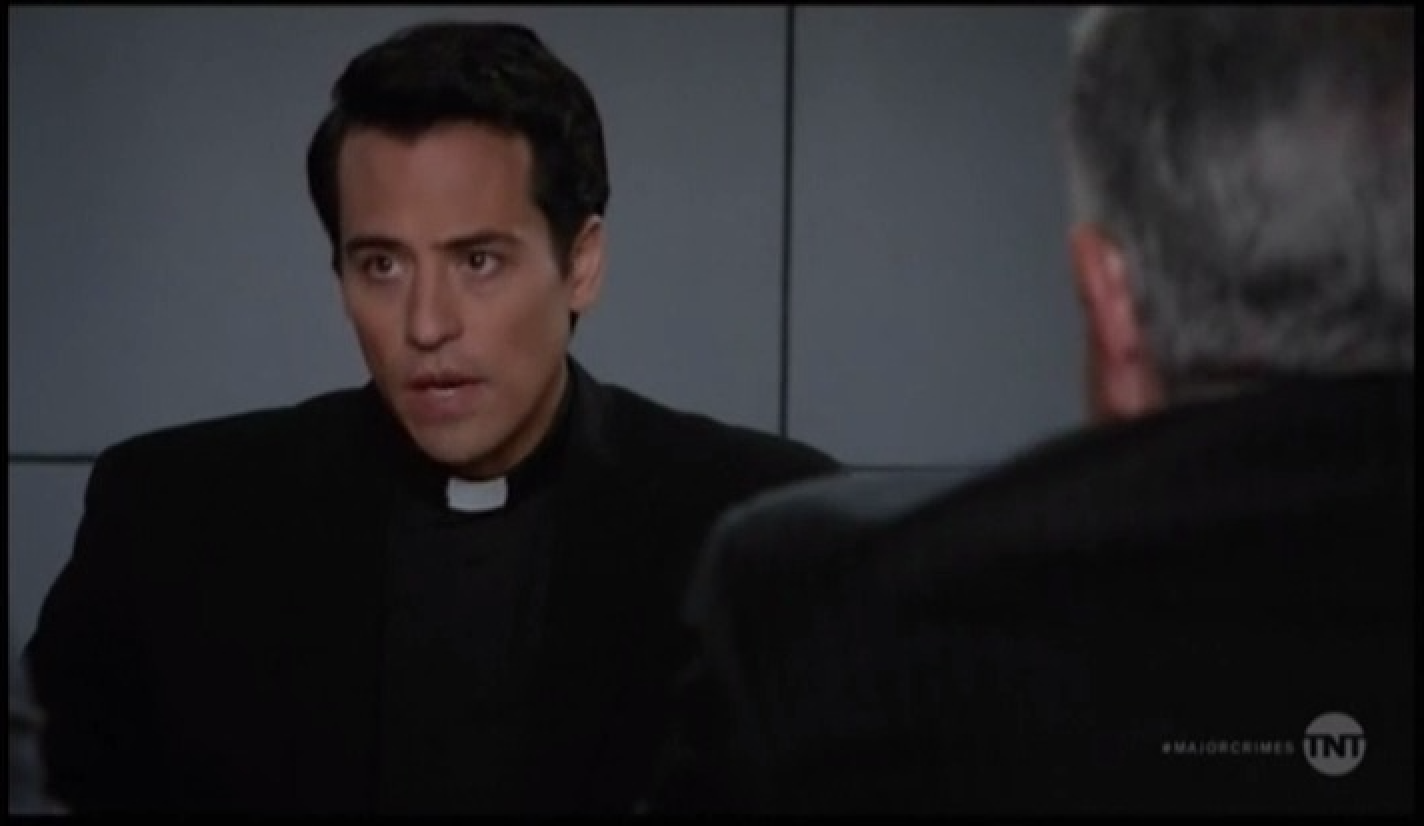 If you wanted to hear some terrible hot takes on immigration, religion, and race, look no further! TNT's drama Major Crimes has you covered, and you only have to watch one scene to get it all.

The November 28 episode "Sanctuary City: Part 5" mercifully wrapped up a storyline in which we have seen quite a bit of anti-Catholic and anti-conservative bias in previous weeks. But first, they had to hit their favorite topics one more time, just to make extra sure we know where they stand, (Don't worry, we do!) including new one attack on a Catholic priest that has to be seen to be believed.

The story of the "Sanctuary City" episodes centers around three 15-year-old boys who go missing during a field trip. Father Jonas, a teacher at the school and mentor to the boys, is treated as a criminal (maybe a murderer, maybe a pedophile, who knows what else?) in the aforementioned episodes based on little more than being a Catholic priest. Turns out that he isn't super into keeping his vows, but he also isn't the awful things the detectives assume.

In this scene, Father Jonas is being questioned by the police and we get his political opinions as well as the show's views on the Catholic Church - and a weird bit of racial commentary thrown in for good measure.

Father Jonas: Shifting immigration policies have demanded extraordinary measures on those of us working to keep families united during crisis. And when it comes to my travels to and from Mexico, my responsibility to Christ-
Flynn: Let me stop you right there, okay, Father? Because when you talk about your responsibilities to Christ, the defense will interrupt and ask if that included refusing to use birth control while having sex with the single moms of some of your students.
Nolan: Yeah. Sorry, Father, but by not answering our questions today, you'll be on the stand explaining whether or not you used a condom when having sex with Ms. Garza.
Father Jonas: I deserve this accusation. But I didn't have sex with any of the boys' mothers. Including Sara Garza. That was not me.
Nolan: Okay then, Father, if it wasn't you, who was it?
Father Jonas: Lucas only spoke about this subject during confession. I can't --
Flynn: Lucas is dead. And the privileged nature of his confession died with him.
Priest: No. No. The Seal of Confession is never broken.
Nolan: Well, we just need to know it wasn't you, Father.
Father Jonas: Do you really believe Lucas would confess to me anything regarding his mother if he thought that I slept with her?
Flynn: Hey, look, Padre. You have a pattern of behavior the defense will use to build up reasonable doubt. You don't like the way I'm questioning you now? Wait until you swear to tell the truth, the whole truth, and nothing but the truth.
Nolan: So help you God.
Father Jonas: Okay. You want proof? Yeah. Here it is. I'm not physically, uh...tempted by Latinas.
Nolan: Excuse me?
Father Jonas: I'll identify all of the women with whom I... I broke my vows. And you'll find every one of them was white. I'm not proud of it. But Latinas just aren't my type.
Flynn: But you're a Latino yourself.
Father Jonas: That's all the explanation you get.

Right off the bat, he's talking about "shifting immigration policies," which is slightly less subtle than using Trump's name, but just barely. Father Jonas has been traveling between California and Mexico to work with families that have been broken due to immigration policies, by which he seems to mean enforcing existing laws. Nobody wants families to suffer or to be separated, and it's not as though ICE and deportations are new under Trump (in fact, deportations are slower now than under Obama) but one wouldn't know that by watching television.

Next, they go after Catholicism by making it clear that Father Jonas is a hypocrite for talking about his "responsibility to Christ" when broke his vow of celibacy - multiple times. While they're on the subject, they also go ahead and make fun of Catholics for not believing in birth control and assuming that they aren't faithful about sticking to that rule, either.

Then Father Jonas throws them a curve ball. He didn't have an affair with the woman they thought ... because he just isn't that into Latina women. (That splash you just heard was Major Crimes jumping the shark with the most ridiculous villainization possible.) They're horrified because he is Latino so, to their thinking, he should be attracted to Latinas.

So they're basically saying this lying, cheating, birth control-using adulterous priest is also a self-loathing racist. Yep, that pretty much sums up what the show thinks about Catholicism.

In just a few short weeks, Major Crimes will be put out of its misery. If you ask me, the major crime is that it was allowed to air for this long.