South Park stepped it up with their second episode of the season, "Put it Down," which took on the President Trump's 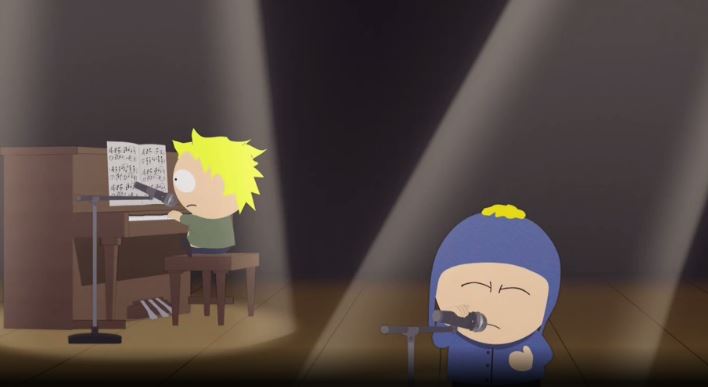 penchant for posting controversial tweets. In Wednesday's episode, the students of South Park Elementary School in Colorado are feeling nervous about a few things in this week's episode - including the looming threat of North Korea, distracted driving, and suicide - and the president's tweets are ever-present and putting everyone on edge.

One student at the school, Tweek, is extremely concerned about North Korea and manages to freak out the entire student body while warning them about it. One of his main worries is that President Trump's tweets will incite North Korea to attack, so he bakes cupcakes for the North Korean leaders in an attempt to show them that not all Americans are ready to go to war.

Trump hears about the overture and tweets about that, too, saying, “I know that kid Tweek, he's fucking with you, North Korea. Get a clue. I bet he took a dump in the batter.” Every time Tweek tries to do something positive or to take his mind off of North Korea, another Trump tweet aimed at him or taunting North Korea ruins his day.

Meanwhile, Cartman wants a suicide awareness week at school so he can get attention for being suicidal, but it's already been designated Distracted Driving Awareness Week. Cartman is certain that this is a silly cause, but children are dying all over South Park as drivers run them over while distracted by reading Donald Trump's shocking Twitter feed on their phones.

All of these storylines come together when the students of South Park Elementary School close out the episode with this hilarious musical number asking the president to put down his phone - with a bonus Hillary cameo that knocks her for still being around.

PC Principal: Tonight, one of our students has put together a song about a very important issue. It's a song about how there are certain times to not be on your phone. I hope you all listen carefully.

Craig singing: People are dying, the fault is our own. You can do lots of damage when you’re on your phone. We all have to agree to change it somehow. Let’s all make a pledge to end it right now.

All singing: Put it down. Don’t be on your phone while being president. Put it down, you might do something dumb and cause an accident. Let’s all agree, here today that if we’re leader of the U.S.A., we’ll put it down.

Sung: Put it down. Don’t be on your phone while being president. Put it down. Might do something dumb and cause an accident. Let’s all agree, here today that if we’re ever leader of the USA, we’ll put it down. Put it down.

Have you ever wanted President Trump to "Put it down?" Be honest.