Pro-abortion reporter Kate Smith announced on Thursday that she quit her job at CBS News. The ostensibly neutral journalist had previously described her beat on her Twitter profile as “covering abortion access,” but based on her coverage, we all knew what that meant - she wanted MORE access to abortion.

"Proof that the media are left-wing activists," Media Research Center President Brent Bozell tweeted. "Is anyone dumb enough to believe she wasn’t promoting baby-killing while covering that very topic at CBS?"

In her announcement Tweet, she thanked “the courageous people that trusted me to share their stories,” i.e. the subjects of the sympathetic profiles she did to promote abortion on network TV. Like the 77-year-old abortion clinic volunteer she interviewed last month or the woman in her second trimester who was finding it difficult to get an abortion in Texas during the pandemic last April. Or the multiple fluff pieces Smith did with Planned Parenthood President Alexis McGill Johnson.

But, now that she no longer works in journalism, she claims she can be “candid” about her pro-abortion views – as if they weren’t already obvious!

Now that I’m not a reporter I can be candid about my own opinions on reproductive rights. I’ll say this: With or without Roe v Wade access to abortion is disappearing across the South and Midwest for low income women. And it’s happening more or less under the radar.

She also took the opportunity to openly cheerlead for more abortion coverage in news and lobby editors to make this "pivotal moment" more of a priority: 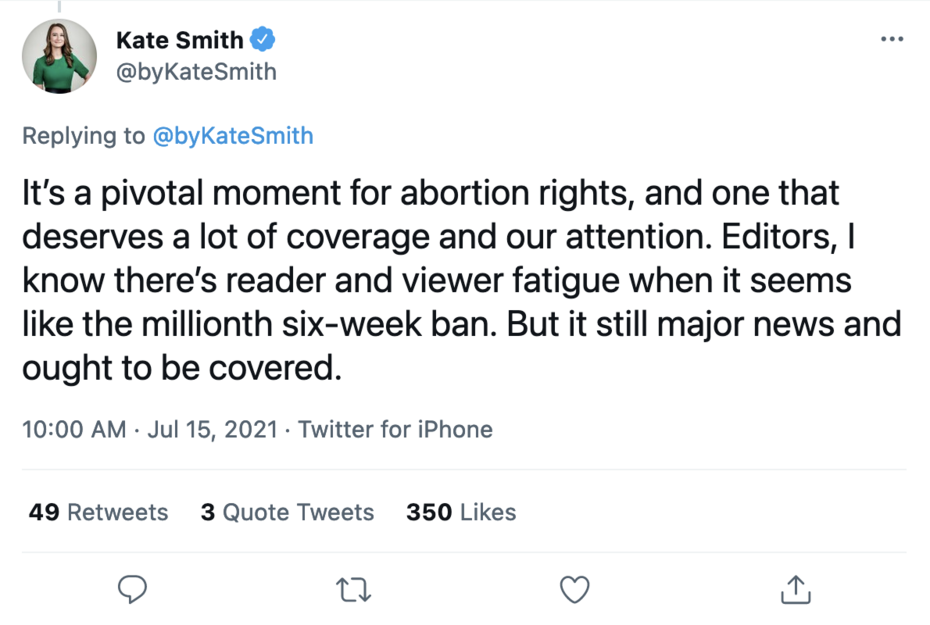 The kind-hearted soul is donating her wardrobe to her fellow abortion activists disguised as reporters appearing on TV because of "how hard it can be" to advocate killing babies in the womb, especially in the South and Midwest.

Are you a TV reporter covering reproductive issues in the South and Midwest? I’m leaving news and would love to give you my wardrobe.

Speaking of being a kind-hearted soul, now that she’s jobless, she has more time to call her pro-life critics “stupid trolls” on Twitter: 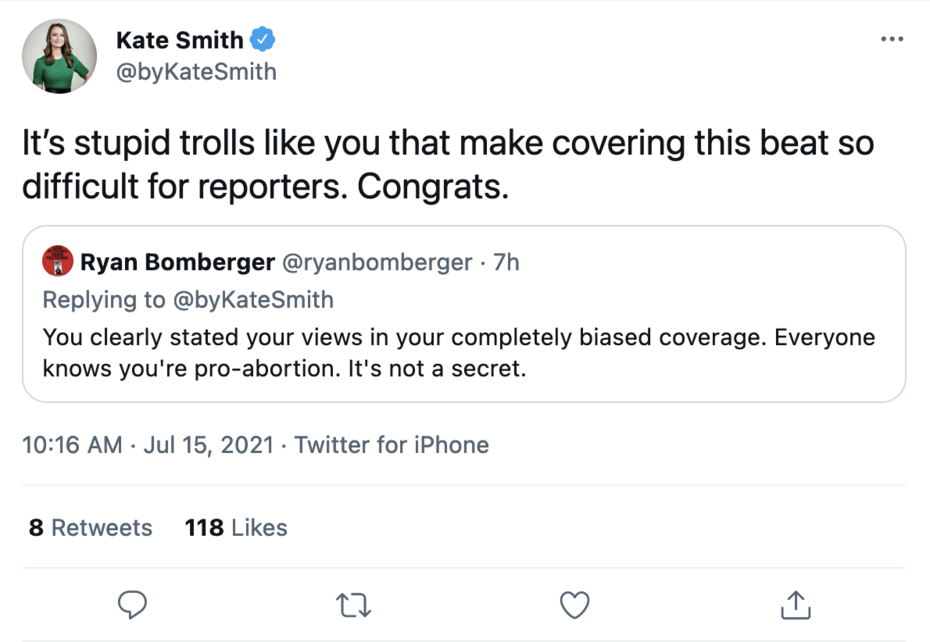 Oh, boo hoo, calling out media bias makes things "so difficult for reporters" who shill for abortion! Just makes me want to criticize their dishonesty even more!

Good bye and good riddance! Now, CBS, shock us all by hiring someone fair and balanced to take Smith's place.