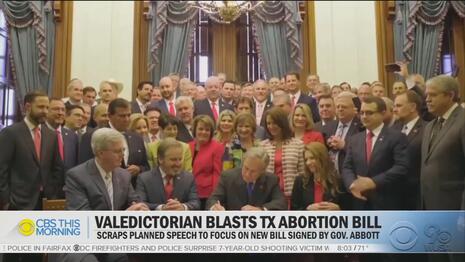 The grisly promoting of abortion on network television continued on Friday as CBS This Morning stood in “awe” of an elderly abortion activist who is fighting Texas’s “so-called” heartbeat bill. Talking to Poppy Northcutt, a 77-year-old who volunteers at abortion clinics, reporter Kate Smith marveled that people still oppose abortion: “Are you surprised that we're having this conversation today about whether or not Roe V. Wade survives?”

The co-hosts could barely contain their disdain for Texas as Gayle King cheered, “I'm in awe of Poppy Northcutt, though.” Co-host Tony Dokoupil complained about the particulars, including a provision allowing private citizens to sue violators of the pro-life legislation: “Incredible law. I'm a little uncomfortable with empowering private citizens and rewarding them for policing their neighbors and friends and getting 10 grand for it.”

During the brief time in which Smith allowed one of the co-sponsors of the bill to talk, she demanded, “Do you think this law will go into effect?”

Of course, the CBS hosts began by hailing a Texas teen who hijacked her graduation speech to complain about the law. Gayle King marveled, “wow.” On Friday’s Good Morning America, reporter Linsey Davis appeared shocked that the girl in question wasn’t getting more hate from conservatives.

The pro-abortion propaganda was sponsored by Toyota and Ford. Click on the links to let them know what you think.

TONY DOKOUPIL: We are going to begin this hour with another moment out of Texas that turns heads. A high school valedictorian in Texas has gone viral for using her graduation speech to blast a controversial abortion law that will soon go into effect on that state. On Sunday Paxton Smith scrapped her planned address to instead condemn the state's so-called heartbeat bill. Take a look.

KATE SMITH: Good morning. Under this law, private citizens will be able to sue doctors that perform abortions in violation of the ban. They'll also be able to sue anyone who, quote, aids and abets those patients, including nurses, family members, rape counselors, and clinic volunteers.

WOMAN: Hello. I'm an escort with the clinic. Is this your first or second appointment?

SMITH: Poppy Northcutt has greeted women in the crowded parking lot of this Houston, Texas, clinic for nearly a decade.

POPPY NORTHCUTT: You're good to go then.

SMITH: What's the need for escorts at a clinic?

NORTHCUTT: Because we usually have protesters here.

SMITH: On the day we visited, nearly 90 percent of the patients seeking abortion would have been turned away under the new law, clinic administrators told us.

NORTHCUTT: They call it a heartbeat bill. It's basically a bill that's going to just cut off access to legalized abortion. Hi, I'm a volunteer with the clinic.

SMITH: And anyone, including Poppy, who helps a woman after cardiac activity is detected at around six weeks —

SMITH: Could be sued and fined a minimum of $10,000 for every patient.

NORTHCUTT: We would have a lot of closures of clinics. But that's the purpose of it. That's the real purpose is harass them out of business.

SMITH: Will you continue your work?

SMITH: Are you worried about the lawsuits?

SMITH: At 26, Northcutt made headlines as NASA's first female engineer at mission control.

SMITH: That experience fueled a decades-long legal career of fighting for women's equality.

NORTHCUTT: It's personal to me because I've seen what happens when abortion is not legal. I had a good friend from college who nearly died from an illegal abortion. I really feel like it's a fundamental right of women to be able to control their own bodies.

SMITH: For Texas State Representative Shelby Slawson it's also personal. She said her mom gave birth to her despite a doctor's recommendation to abort. Slawson co-wrote the bill with State Senator Brian Hughes. This bill doesn't offer any exceptions for victims of rape or incest. Why is that?

BRYAN HUGHES (R-Texas State Senator): We do make sure if the mother's life is in danger, that's taken care of. As far as rape, let's punish the rapist, let's don't punish the little unborn baby.

SMITH: So-called heartbeat bans passed in 14 other been blocked by federal courts. But in Texas, private citizens will be able to sue anyone they believe violates the law. Meaning abortion rights groups will need a new legal strategy to fight this ban.

SMITH: Do you think this law will go into effect?

HUGHES: I do. I believe it will.

SMITH: Are you surprised that we're having this conversation today about whether or not Roe V. Wade survives?

SMITH: The law goes into effect September 1st. The Supreme Court recently announced it would consider a Mississippi law banning most abortions after 15 weeks. Now Gayle, that will give the newly conservative bench the very first time to look at Roe V. Wade since it was decided 50 years ago.

GAYLE KING: I'm in awe of Poppy Northcutt, though.

MASON: What a career.

TONY DOKOUPIL: Incredible law. I'm a little uncomfortable with empowering private citizens and rewarding them for policing their neighbors and friends and getting 10 grand for it.

SMITH: This is a law unlike we've ever seen in the abortion space but it's also a unique law in general. When I was speaking to people, they were saying not only does this open up the flood gates for abortion restrictions, but you could see this being used for other things like gun control or contentious issues.

KING: But it was interesting to see Paxton Smith talking at her graduation and then cut to Poppy Northcutt still having this conversation. Good to see you, Kate Smith, at the table.