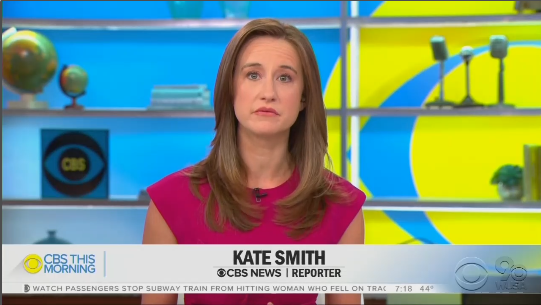 Pro-abortion CBS News “reporter” Kate Smith is at it again. On April 28, she submitted another story shilling for the abortion industry. It began with this dramatic headline: “Abortion providers say they're experiencing a ‘post-Roe’ world. Others say it's worse.”

Smith, who describes her beat on her Twitter profile as “covering abortion access,” quoted four pro-abortion sources and only one pro-life source in her story. Further showing her bias, she called abortion restrictions “another public health crisis emerging” on top of the ChiCom coronavirus because some states have included abortion as non-essential medical procedure.

In reporting on the influx of women wanting abortions from Texas going to other states, Smith said one abortion organization leader told her they’re so busy that “Some days, her clinics have nearly run out of supplies.” With PPEs in short supply and prioritized for healthcare workers on the frontlines fighting the coronavirus, one wonders what kinds of equipment they’re using so much of they’re almost running out.

Bemoaning the plight of women seeking to snuff the life from their wombs, Smith reported:

Texas patients traveled nearly 2,000% farther to get to the nearest clinic, according to a study from the Guttmacher Institute, a reproductive health research organization. If abortion access were shut down in every state that sought to halt services amid the coronavirus pandemic, the average one-way driving distance to the nearest clinic would have risen 3,625%, to 447 miles from 12, according to data from Guttmacher shared exclusively with CBS News.

How horrific that there are so many abortion clinics that there’s one on average every 12 miles.

It is not surprising that Guttmacher, formerly Planned Parenthood’s research arm, gave Smith an exclusive. As Alexandra DeSanctis wrote for National Review Online on Monday, reporter Kate Smith is pretty much an ambassador for Planned Parenthood.

Kate Smith is not a reporter at all. She is an advocate for abortion rights who exploits her perch at CBS to disguise as fact the opinions of the country’s most radical abortion-rights activists. She is Planned Parenthood’s ambassador to CBS, posing as a reporter and constructing articles that more closely resemble press releases for the nation’s most powerful abortion-rights advocacy groups. She has traded her objectivity for access to these organizations, offering them the kid-glove treatment so they will permit her to be the first to publicize their PR campaigns, interview their leaders, and scoop their briefs in court cases.

Here at Newsbusters, we, too, have found a lot to criticize Smith for in her “reporting.”

Smith warned “abortion rights” are “more vulnerable than they've ever been” because of a Supreme Court case coming up this summer:

A decision on June Medical Services v. Russo is expected in June, and abortion-rights supporters say it could render Roe virtually meaningless. More than a dozen similar cases are making their way through the judicial process that could have the same effect: overturning Roe or eroding it to a point that the right to an abortion in the United States exists in name only.

Without Roe, states would be able to decide for themselves whether to legalize abortion. Abortion-rights group warn the effect would be a patchwork of access and service availability determined by a patient's zip code.

"This is exactly what you would see in a post-Roe world," said Nancy Northup, the chief executive officer of the Center for Reproductive Rights, one of the country's biggest law firms defending abortion access. "You'd see these very same states shut off access. It's terrifying."

Actually, "It's many times worse than some of the post-Roe landscapes we've imagined because of the public health crisis," said Amy Hagstrom Miller, founder of abortion clinic group Whole Woman's Health's founder.

Sadly, “The economic devastation caused by the outbreak has caused some families to hold off on parenthood,” the very definition of an elective abortion. It’s heartbreaking to hear that women think they have to choose between their baby’s life and their economic life:

"We've been hearing from women who've said, 'In any other circumstance I would continue this pregnancy and have my baby,'" [Julie Burkhart, the founder of abortion organization Trust Women] said. "But at this point they've made the decision within their family, that an abortion would be the best thing."

Smith also profiled a 20-year-old woman who is almost 19 weeks pregnant – that’s well into the fourth month of pregnancy. Weeks ago, her abortion appointment was canceled because non-essential procedures were banned in Texas. There was no explanation as to why she waited until her second trimester to seek an abortion except she was “out of work and unexpectedly pregnant” and “keeping the pregnancy wasn't an option.”

"I have rights," the woman groused. "I can't be a mother right now, and right now, I have the right not to be."

Sadly for her, an abortion doesn't stop her from being a mother, it just makes her the mother of a dead baby.