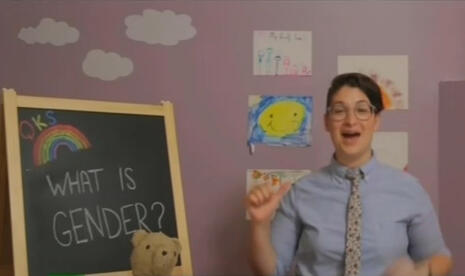 Myers has “a gender-studies degree and a Ph.D. in sociology” and taught a “Sociology of Gender and Sexuality course,” which explains SO much! But the horrifying thing is that this early-30s mom is running a social experiment on her own child!

In her own words, here’s how she decided to handle the issue of her child’s gender:

If you want to get technical, my partner Brent and I had found out our child’s sex chromosomes in the early stages of my pregnancy, and we had seen their genitals during the anatomy scan. But we didn’t think that information told us anything about our kid’s gender. The only things we really knew about our baby is that they were human, breech and going to be named Zoomer. We weren’t going to assign a gender or disclose their reproductive anatomy to people who didn’t need to know, and we were going to use the gender-neutral personal pronouns they, them and their. We imagined it could be years before our child would tell us, in their own way, if they were a boy, a girl, nonbinary or if another gender identity fit them best. Until then, we were committed to raising our child without the expectations or restrictions of the gender binary.

“Zoomer!” Already this kid is going to have problems in life based on that name alone and they imposed gender confusion on top of that?

But to Myers this was just part of protecting her child:

Parents take precautions to keep their children healthy and safe by enrolling them in swim lessons, teaching them to stay away from fire and cutting food into tiny pieces. Holding space for the possibility a child might be trans or nonbinary or queer is also preventative care.

See how much MORE she cares about her child than the rest of you rubes still going by the old patriarchal gender binary?! Her way is full of love and rainbows and unicorns:

The goal of gender-creative parenting is not to eliminate gender—the goal is to eliminate gender-based oppression, disparities and violence. The aim isn’t to create a genderless world; it’s to contribute to a genderfull one. We as a society have an opportunity to shake up childhood gender socialization in a way that creates more healthy and equitable adulthoods for everyone. What have we got to lose? The patriarchy? Good riddance.

Alas, sometimes the world does not conform to her “genderfull” ideology. She was heartbroken to learn this when attempting to sign Zoomer up for a kids track team.

… I left that track meet in tears after I found out that despite assurances to the contrary, the 2- and 3-year-old girls would run in different heats than the boys. “I not running?” Zoomer asked as we drove away. I felt terrible for leaving. Zoomer just wanted to run. But I also would have felt terrible if I had stayed. It is these moments that plant the seeds that boys and girls are dramatically different, and in the case of track and field, that boys are better. I refused to have our family participate.

I agree gender doesn’t matter much when it comes to toddlers’ athletic ability, but eventually her kid is going to notice on their own that boys are dramatically different (and better) from girls when it comes to sports. Bone density and muscle mass aren’t dictated by society’s gender expectations. And it sounds like Myers wants to get rid of Title IX and women’s sports. What a misogynist!

Of course, to Myers, Zoomer is an advanced and perfectly adapted little child:

A common critique of gender-creative parenting is that “the kid will be confused,” but Zoomer doesn’t seem confused at all. In fact, they have a more nuanced understanding of sex and gender than a lot of adults. We teach them to use gender-neutral words until a person tells us about themself. We call kids friends. We have taught Zoomer about their own body without using boy-girl labels. Zoomer understands that some girls have penises and some boys have vulvas, and some intersex kids have vulvas and testes. Zoomer knows some daddies get pregnant and some nonbinary parents are called Zazas.

When it comes time to explain reproduction, this kid is gonna be SO confused! And what about when they see a biology textbook? Oh, I forgot, it’s all about believing the science until it comes to gender.

Myers humble brags, “Because Zoomer has been raised with a focus on inclusivity, they have an instinct to make everyone feel welcome. When a character on a kids’ show says, ‘Hello, boys and girls!’ Zoomer adds, ‘And nonbinary pals!’” I’m rolling my eyes so hard right now you can probably hear it!

The self-praise and congratulations continue:

I wanted to give my child a gift. The gift of seeing people as more than just a gender. The gift of understanding gender as complex, beautiful and self-determined. I hadn’t considered how much of a gift I’d also be giving myself. While curating an experience for Zoomer to come to their own identity, I inadvertently started taking a closer look at mine too.

...I’m witnessing my child create their own gender—and who Zoomer has become is greater than anything I could have imagined or assigned. Instead of us telling the children who they should be, maybe it’s the children who will teach us how to be. We just have to get out of their way.

Yes, PLEASE, Myers, get out of the way!