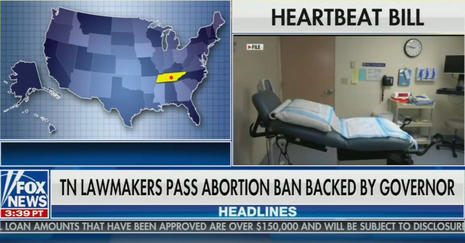 Lauren Rankin is a white, pro-abortion feminist who wants to bring attention to a new pro-life law in Tennessee that’s become lost amidst the Black Lives Matter protests. Cleverly, she ties the two together saying, “Tennessee’s egregious new law should be a part of that conversation, too, because at their core, abortion bans aren’t just sexist — they are fundamentally racist.”

In her Refinery 29 piece published on Wednesday, Rankin declares, “White supremacy reaches into every aspect of life in America, and that includes reproductive politics.” Refinery 29, of course, is a liberal outlet, so no attempt is made to be fair or accurate. Throughout the piece she refers to a “six-week abortion ban,” instead of admitting that the bill will prevent abortions once an unborn baby’s heart starts beating, which happens at about 6 weeks. She also dubs it a “near-total abortion ban,” except the CDC reported in 2016 that a whopping 37.8% of abortions occurred at or before 6 weeks. She also claims without proof the law “will undoubtedly cost some Black women their lives.”

Rankin quotes Cherisse Scott, founder and CEO of SisterReach, a Memphis-based pro-abortion activist group, as making similarly outlandish claims, saying, “Black women and girls, other vulnerable Tennessee women and pregnant people, will die” because of the legislation which Scott calls unconstitutional, “racist and classist.” Scott also declared, the life-saving bill “was decided by a majority white, male, evangelical legislature that double-talks about life while they unapologetically sanction the killing and destruction of vulnerable families all over this state.” [Emphasis added]

If you think that’s wildly hyperbolic, check out the extreme hysterics in this next quotation in which she equates pro-lifers in support of this bill to the main officer charged with killing George Floyd:

“On this Juneteenth holiday, commemorating the liberation of slaves two years after the Emancipation Proclamation, we find ourselves once again impacted by white supremacy, errant theology, and political terrorism led by white men,” Cherisse Scott of SisterReach said in a statement. “This abortion ban is the knee on the neck of Black women. This abortion ban will place our lives at stake and is the crucifixion of the most vulnerable people in Tennessee. Gov. [Bill] Lee, every Senator and House Representative who made this abortion ban possible, are no better than Officer Derek Chauvin.”

Meanwhile, Rankin calls pro-life signs that state the truth that “Black Unborn Lives Matter” and “The most dangerous place for an African-American is in the womb” “racist.” In 2014, 259,336 black lives were snuffed out before even being allowed to breathe – that’s more than the top 15 leading causes of deaths among African Americans combined.

“It’s clear that abortion bans disproportionately impact women of color, Black women in particular,” Rankin is quick to point out. “When abortion is banned and criminalized, it is Black women who suffer the most.” But, aside from a red herring about maternal mortality rates (the bill allows exceptions for the life of the mother), she fails to explain why: Black women are disproportionately more likely to have abortions. Though making up only about 13 percent of the population, 40 percent of the nation’s abortions are committed on African Americans.

So, Rankin is correct when she says, “The fight for Black lives is inextricably linked to the fight against abortion bans like Tennessee’s.” Except, counter to Rankins calculations, when pro-life laws are allowed to be enacted, it is black lives that are saved the most!

Again, almost 260,000 black lives are missing on earth due to abortion from just one year and yet Rankin paradoxically calls on woke white people to continue the destruction of black lives in the womb: “For white people who… are finally opening their eyes to the pervasive reality of violent white supremacy in this country, it’s well past time to extend that outrage to racist abortion bans.”

It is not racist to save black lives from abortion. If anything, a white woman urging other whites to fight to keep in place a practice that has disproportionately ended tens of millions of black lives over the decades is the epitome of white supremacy.