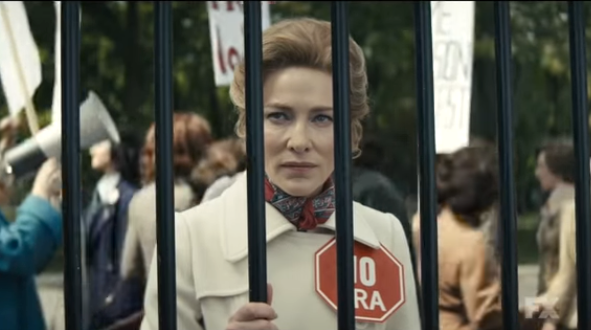 On Thursday FX released a trailer for its upcoming series on Hulu Mrs. America about conservative icon Phyllis Schlafly’s fight against radical feminists and the Equal Rights Amendment (ERA) in the 1970s. You can tell, based on the video and coverage of it, where sympathies are supposed to lie.

When Cate Blanchett’s Schlafly character warns, “The Libbers [Women’s Liberation] want to create a sex-neutral, feminist, totalitarian nightmare,” audiences are meant to take it as a ridiculous joke instead of the astute prediction it truly was. In the preview, Schlafly is played as cold while the feminists are shown as cool.

Online sources covering the trailer’s release described Schlafly using austere language like “polarizing character” and “anti-feminist crusader” while attaching no judgmental adjectives to descriptions of Gloria Steinheim. TV Guide called Schlafly a “slippery, media-savvy opponent” of the feminists as if that makes her nefarious.

Tellingly, TV Guide misleads about what the ERA would do and automatically assumes Schlafly should be held in disdain:

Despite the fact that Schlafly almost single-handedly stopped the ERA, which would've guaranteed all citizens equal rights under federal law regardless of sex, Blanchett told reporters she didn't approach playing her with disdain, but rather a desire to capture her humanity. "I don't believe in demonizing anyone," Blanchett said, noting that we as humans are all full of contradictions and hypocrisies. "It is a challenge when you're playing a figure who is so polarizing. It was definitely a challenge to find those nuances and not play one note. She's a human."

How kind of Blanchett to acknowledge Schlafly’s humanity and not play her as a one note villain!

Apparently Blanchett did not expect to find Schlafly so charismatic and popular: “She also revealed that she was ‘gobsmacked by [Schlafly's] ability to inspire, galvanize, and mobilize people through various tactics,’ even if some of the ways she got her message across have been derided as misleading and mean,” TV Guide editorialized.

To give you an idea of how the series will play out, the producers “took great care to present the story as layered and nuanced and intersectional,” according to TV Guide. In fact, an article in Variety said the inclusion of the first black Congresswoman, Shirley Chilsholm, “introduces the birth of intersectional feminism.” The actress playing Chilsholm, Uzo Aduba, said her voice will “right a cultural wrong” because “we’ve glossed over some of those intersectional figures and their importance and their relevance in the story.”

Other radical 1970s feminists to be portrayed include Steinheim (Rose Byrne), Betty Friedan (Tracey Ullman), Bella Abzug (Margo Martindale), and Jill Ruckelshaus (Elizabeth Banks). On the conservative side, lefty actress Sarah Paulson will play a composite character based on Schlafly’s neighbor. Paulson described her character, Alice, to Variety as feeling “that she somehow didn’t matter because her desire was to be in her home and support her husband.” In other words, don’t expect a very sympathetic portrayal of conservative women.

To creator Dahvi Waller, Schlafly is to blame for our current divisiveness: “[Y]ou can draw a direct line from 1970 to today through Phyllis Schlafly and really understand how we became such a divided nation.”

Actress Elizabeth Banks enthused about her feminist role, “I’m really excited that we’re telling the story of these particular women, these are the women who’s [sic] shoulders as current feminists we are standing. We get to go to work, and sometimes get equal pay, and control over our bodies ... this is what this show is about.”

The first 3 episodes of Mrs. America will be released on April 15 by FX on Hulu.