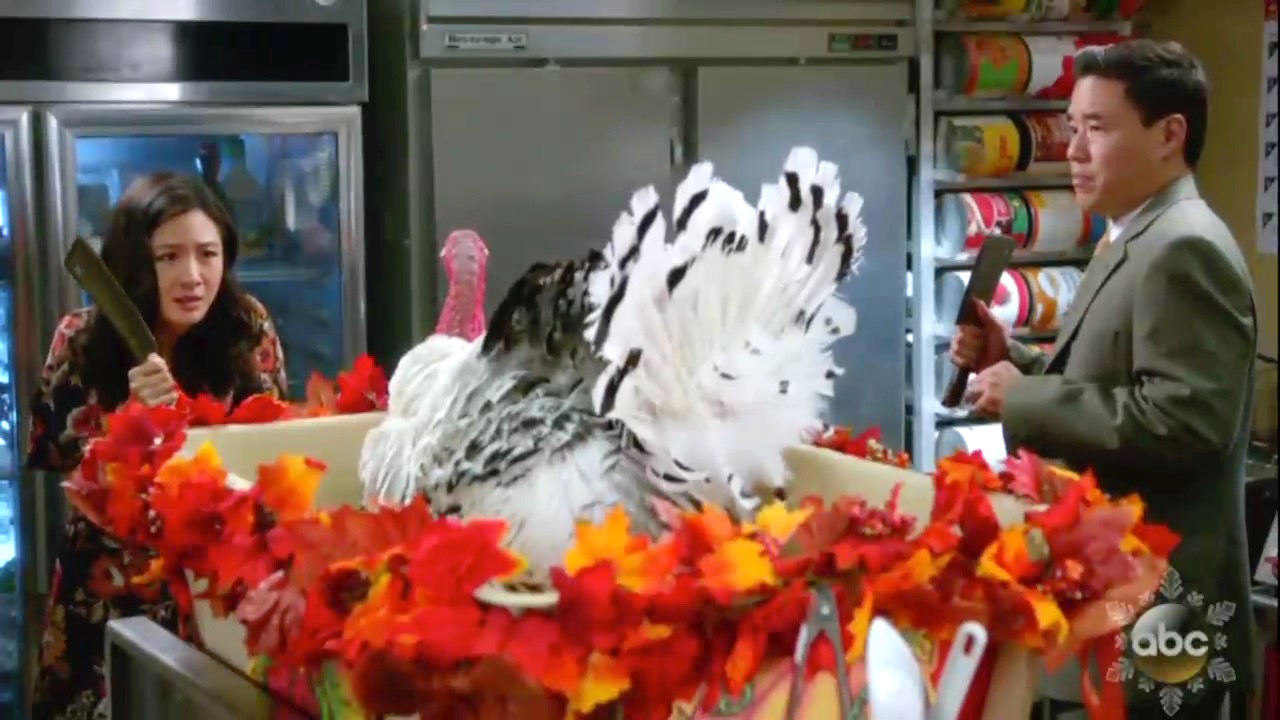 Although there are a few shows to be thankful for, overall, TV is full of anti-conservative and anti-Thanksgiving messages. They'd rather have you feeling guilty than grateful. From calling Thanksgiving "unethical" to equating it to "genocide," "racism" and "Nazis," these shows have twisted the spirit of Thanksgiving into something unrecognizable and grotesque. Take a look at these turkeys.

In 2015, long canceled Fox sitcom Grandfathered was ahead of the curve in saying, "Thanksgiving has unethical origins." Two years later, Sarah Silverman went further and ranted about the "genocide and racism" in Thanksgiving on her Hulu show I Love You, America, even describing the holiday as “the very first dinner between the pilgrims and the Native Americans they fucked over.”

Last Thanksgiving, Murphy Brown threatened to "spatchcock" ICE agents who came to take away a DACA student she knew. On The Neighborhood, Dave's "conservative" - aka "racist" - mom spoiled Thanksgiving dinner with her "horribly offensive" comments. And Supergirl reminded viewers that in the years after Thanksgiving, "the European invaders slaughtered their hosts."

ABC comedy Fresh Off the Boat knocked the holiday in their 2016 Thanksgiving episode. Jessica (Constance Wu) called Thanksgiving "a celebration of people who made a living by swindling the natives" when she rigged a raffle so her family could get their money back on the prize turkey.

Louis: Did you rig this?

Jessica: You're welcome. Now we get all the raffle money, and we can return the prize Turkey. Happy Thankskeeping.

Louis: Of course you'd bring corruption into these halls. You have no regard for the sanctity of Cattleman's!

Jessica: This day's a celebration of people who made a living by swindling the natives. I am so Thanksgiving. Hello, Pilgrims!

Hulu’s horror anthology series Into the Dark's Thanksgiving episode this year followed a family hosting pilgrim re-enactors to give them an authentic recreation of the first Thanksgiving. The daughter didn't want to take part in “the whitewashed history of the Native American genocide” and equated the pilgrims to Nazis.

Shane: Hey, uh, well we were just discussing all the Thanksgiving memories that we’re going to create this year.

Ethan: Well, Thanksgiving symbolizes coming together, understanding and being grateful for what one has. When we first arrived on Plymouth Rock and were greeted by the Indians-

Ethan:…they taught us their ways. Farming, the local animals, harvesting the crops, and we in return taught them our Old World traditions, and we gave them so many things for which they were very grateful.

Cody: Yeah, um, speaking of re-enactors, can I go to Rachel’s for dinner tomorrow? They’re hosting a Nazi.

In the November 24 The Simpsons “Thanksgiving of Horror” episode on Fox, aliens showed up ready to take over the planet dressed as pilgrims because that’s “how oppressive colonizers dress.”

Marge: Good evening. Well, Halloween has come and gone but, you know, the world has gotten so darn scary lately, what with the grim specter of everything, that one holiday just wasn't enough to contain all the frights and chills. So this year the terror has spread into Thanksgiving.

Marge: Tonight, we're bringing you three spine-tingling and stomach-filling tales of Thanksgiving terror. It's pretty gruesome, so you might want to cover your kids' eyes. Ooh, you two have gotten into the Thanksgiving spirit.

Kang: Incorrect. We are taking over your planet. Is this not how oppressive colonizers dress?

In this year's November 20 episode, the classroom teacher for the Single Parents’ kids was invited to their Thanksgiving celebration. At the door, she greeted the children by saying, "Happy Genocide Day!" and reminding them not to indulge in "traditional holiday stereotypes."

Graham: My teacher. In my temporary home? Who's watching the school?

Ms. Pronstroller: Hi, friends. Uh, what are we doing with our day? I hope we're not just lying around.

Sophie: Um...no. No. We are in our comfy pants... Because we are rehearsing our Thanksgiving play.

Ms. Pronstroller: Well, I'm sure it'll reflect everything I've taught you and not traditional holiday stereotypes. ...