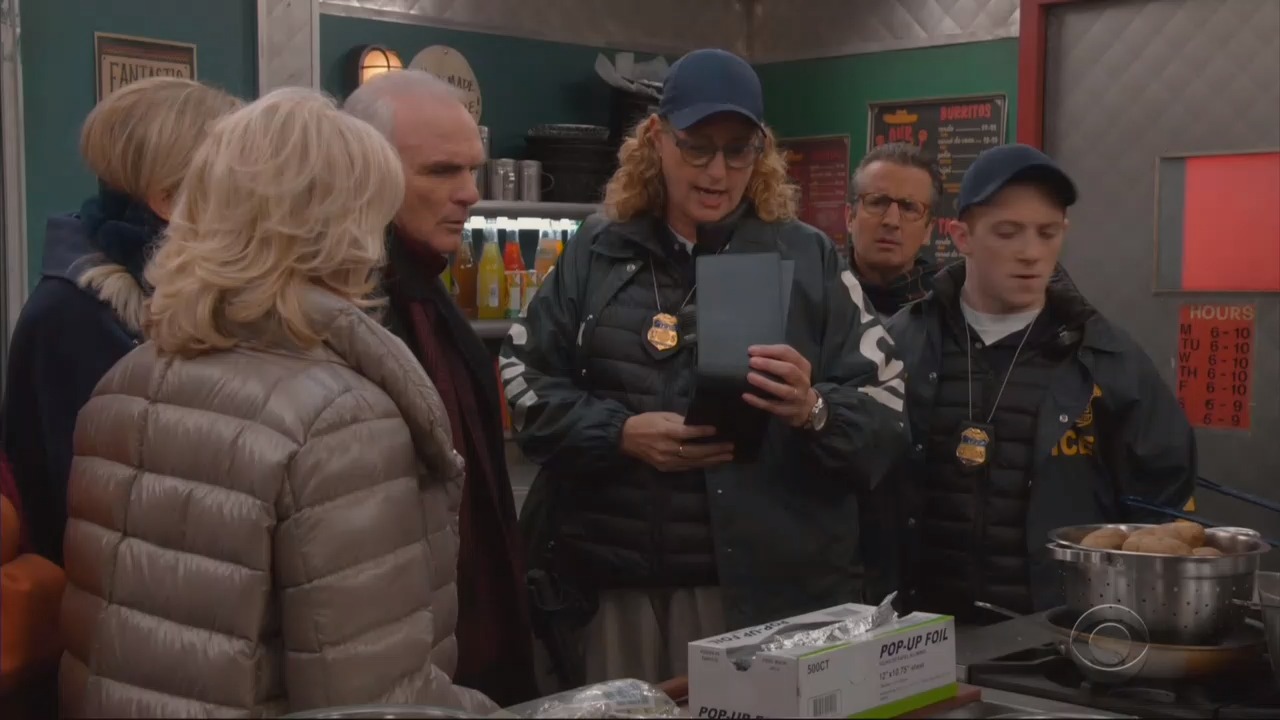 Nothing says "Thanksgiving" like some virtue-shaming dialogue about illegal immigration recited by a liberal Hollywood feminist, am I right? The Thanksgiving episode of CBS’s Murphy Brown even included a threat of physical violence to ICE agents and when that didn’t work, verbal intimidation was used.

In the episode airing November 22, titled "Thanksgiving and Taking," Murphy Brown (Candice Bergen) insists on cooking a Thanksgiving dinner for her son Avery (Jake McDorman), a journalist, since he is home this year. He usually misses the holiday with Murphy because of his work assignments. She also insists that her co-workers join them.

When bar and grille owner Phyllis and her helper Miguel (a DACA student worker) show up with the liquor, Miguel tells Murphy he can’t stay for dinner because he is going to help his parents on their food truck. Murphy insists they come to dinner, too, since a winter storm is moving in and they will have no customers.

Suffice it to say, Murphy can’t cook. Miguel’s mother helps Murphy and while doing so, they talk about her coming to America illegally to escape the violence in their country. She tells Murphy that Miguel was only two years old at the time.

The storm causes the electrical power to go out in Murphy’s home so they all head out to the food truck to finish cooking the meal. That is when two ICE agents show up. A neighbor complained about a food truck on the street and when the license plate was run because of a broken tail light, the police discovered that there was an outstanding order of removal for Miguel’s parents, Carlos and Maria. As this is happening, Avery asks Pat (Nik Dodani) to film it on his camera while he provides narration. Needless to say, Murphy isn’t having it. She threatens the ICE agents and then uses intimidation.

Also, one of the ICE agents first assumes that Pat is Carlos and questions where he was born. Pat is Indian-American from Ohio. The implication seemed to be that an ICE agent couldn’t distinguish between an Indian-American, and someone from Central America.

Murphy: You cannot barge in here like this. I know you're used to dealing with people who are scared and vulnerable, but if you don't get out of this truck, I will spatchcock you.

ICE Agent 2: Oh, yeah. I read about that in Gourmet Magazine. It doesn't dry out the bird, and it cuts the cooking time in half.

ICE Agent 1: Reynolds! What did I tell you about losing focus? Look, lady, we're in the removal business. We've got our orders. Maria and Carlos Gonzales, step forward.

Carlos: No, Miguelito. He is DACA. I'm Carlos Gonzales.

Avery: Hey, Pat, do you have your phone? Record this.

ICE Agent 1: You'll be taken to a retention center...

Avery: It's Thanksgiving Day here in America. ICE agents, with no paperwork, have shown up to arrest an undocumented couple who have lived in this country for 20 years. They have contributed to their community, and they have no criminal record. They pay their taxes, and they are raising a son who will one day become a lawyer.

Murphy: You don't have to put handcuffs on them, for God's sakes.

Miguel: What did they do except give up everything so I could grow up in a country that we thought was the most compassionate place in the world?

Maria: Can we have a moment with our son?

Carlos: Miguel. Miguel. We always knew this day might come. We've put some money aside for you.

Maria: This is why you need to finish school and become a lawyer.

Phyllis: I will see to it that … He will always have a roof over his head as long as I'm around.

Maria: I love you, Miguel.

Murphy: You know what? I will be your worst nightmare! I know people! I know immigration attorneys! I know judges! They are not going anywhere!

During her morning television show the next day, Murphy Brown goes off-script as she ends the show and plays the video of the ICE raid. Then she emotionally tells the audience that she wasn’t able to help the Gonzales family. She dwells on the fact that parents were separated from their child. It was all about the emotional appeal.

Murphy: Thank you, Corky. And on Monday, we're going to have a special segment on -- Actually, I'm going to go off-script for a minute. I normally don't tell personal stories on the air, but something happened yesterday. I can't imagine what it's like for parents to be separated from their child, but I watched it happen to friends of mine.

Murphy: Oh, for God's sake, you don't have to put handcuffs on them.

Miguel: What did they do except give up everything so I could grow up in a country that we thought was the most compassionate place in the world?

Murphy: I did everything I could to stop it. I called in every favor. I pulled every string. But it wasn't enough. People say, "Why can't these illegals just get in line and apply for citizenship?" Well, there isn't any line. There's no path to citizenship if you've come into this country the way my friends did -- yes, illegally. But because they would have waited years to become citizens -- precious years with a young child vulnerable to the gang violence and drug culture that threatened his future. So, if you celebrated Thanksgiving yesterday with your family, I hope you gave real thanks that you were all together. As for me, watching what I did yesterday might have given me a real reason to lose faith in my country. But I refuse to believe that we've become so jaded that we feel nothing when we see these human beings experiencing such heartache. There has to be a way to fix this. We can do better. We will do better. I know we can. This has been "Murphy in the Morning."

Here’s the thing, though. Americans do feel compassion for those wanting to come to America for a better life. However, we are a nation of laws and we have to know who is here in order to protect our country. There are many countries throughout the world with rampant violence. The open borders crowd wants to play on the heartstrings of regular Americans who end up footing the bill for illegal aliens and suffering from those criminal ones who murder or sell drugs or drive drunk in our country. Hollywood can try and paint ICE as the bad guys but regular Americans know that they are putting themselves in harm’s way to protect us all and we thank them.