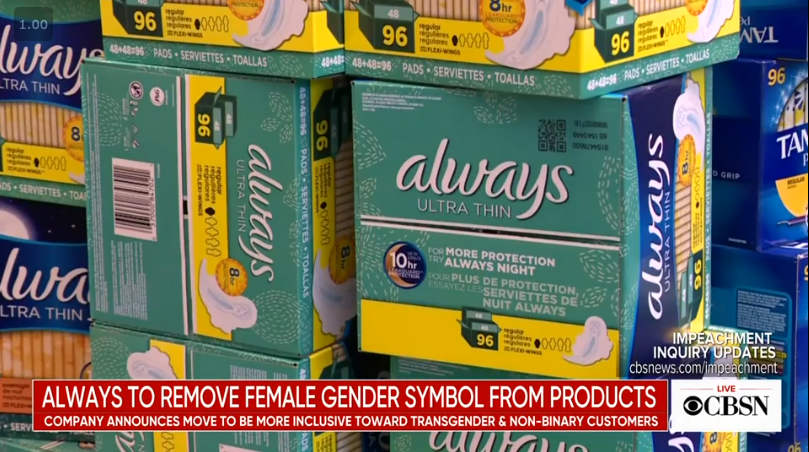 Talk about putting the “men” in menstruation! On Tuesday it was announced that feminine hygiene product brand Always would be removing the Venus female symbol from its packaging. CBS News reported, “The announcement follows pleas from LGBTQ activists to make the labeling more inclusive of transgender and non-binary customers.” Because apparently having feminine products coded as feminine is offensive and exclusionary.

According to CBS News, “LGBTQ activists and allies have been publicly asking P&G [Procter & Gamble] to redesign the packaging to be more gender-neutral. They argued that using the female symbol is exclusive because not all women menstruate, and not all people who menstruate identify as women.” Okay, but all who menstruate have the XX chromosomes that would make them biologically female.

This is the same nonsense that has the left and the liberal media editing their language to be ridiculously non-gendered. Intersectionality has forced feminists to change the names of their “lady parts” organizations and fight for the right of women and “pregnant people” to have abortions.

The CBS report gave the impression that along with LGBTQ activists, “health advocates championed the move.” I guess packaging design is a health issue now. They also noted “a number of customers expressed outrage that the change appears to ‘eliminate’ women” but claimed the hashtag #BoycottAlways “sparked a slew of transphobic comments on social media,” while providing no evidence or explanation of what would be considered “transphobic.” Probably anything that wasn’t outright praise and celebration.

They did, however, quote from pro-abortion activist and New York Times contributor Dr. Jen Gunter, who tweeted, “Some trans men/non binary people menstruate. As do cis women who despise overly feminine products. Cis women who can’t menstruate and trans women are harmed by the assumption that menstruation defines femininity. Less ink for printing better for planet. This is a win all around.” How many style points in the intersectionality Olympics does she get for including environmentalism in that illogical screed?

In the Twitter thread, Gunter also hilariously cis-splained to NBC Out, the LGBTQ News and Information section of NBC News, “They are menstrual or period products, not feminine products.” She further lectured to everyone dying to get the latest scoop on woke messaging for period products, “They are also not sanitary products as having a period does not make you unsanitary!” I’m pretty sure the phrase refers to the hygienic cleanup of blood and bodily fluids, not calling the user unsanitary, but what do I know, I’m not a doctor.

We’ve been told for decades by the left that it’s a man’s world but now, with the activism from the LGBTQ community taking away women’s spaces so they’re inclusive for “men,” it’s actually coming true.