On Wednesday night’s episode of ABC’s gay propaganda miniseries When We Rise, “Night II,” the lesbians attempt to prove that so-called “male interference” is not required to have a child, while the gays think there's government interference on AIDS, with attacks on conservatives and President Reagan thrown in for good measure.

As AIDS is reaching a crisis in the San Francisco gay community, there is discussion about it being a plot by the government, cops, the Pope, or Jerry Falwell to let it spread as a way to knock gays “down to size.” Of course, they get in some swipes at President Ronald Reagan as well. They talk about how to “get Reagan to give a damn” and show a man holding a sign that says, “Living with AIDS 2 years, 6 months and counting, No thanks to you, Mr. Reagan!” set to haunting music.

Reporter: Many religious groups have far less trouble defining homosexuality.
Rev. Jerry Falwell: When you break the moral laws of God, you mentally, physically, and spiritually pay the price.
Man: You're saying that this is a result of lifestyle. And immorality.
Falwell: You know that's true in your heart.
Ken: Thank you. That is -- That is very helpful. That was a community health liaison from Miami. They've got a cluster of new cases in Haitian immigrants -- mostly women. This could be the proof we need to rip off the "Gay" label and get federal action.
Richard: Proof of what?
Ken: That it's not just a gay thing. I.V. Drug users, black folks, poor folks, immigrants, women.
Richard: You think any of those groups are gonna get Reagan to give a damn?
Ken: If I didn't know any better, I'd say it's a government plot.
Richard: Yeah. I work for the government. They couldn't pull something this intricate off. Willfully letting it spread... That's another story. 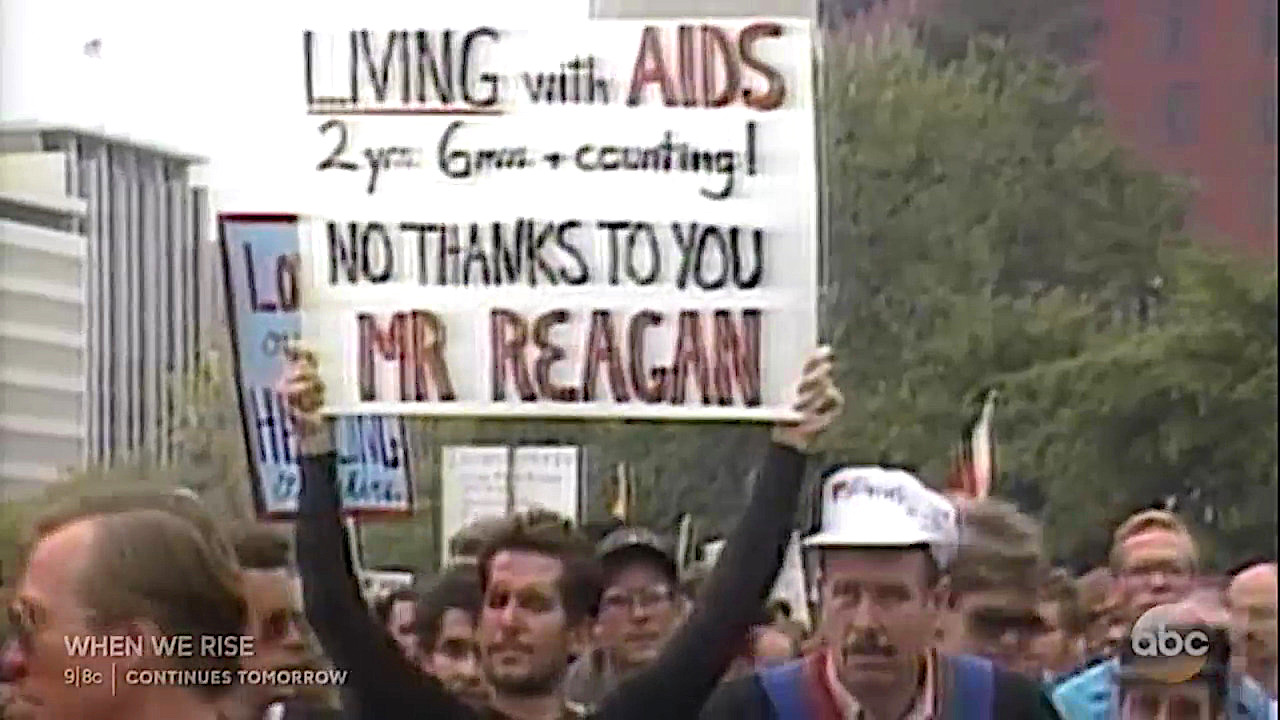 Marvin: When did they start installing those ionizers in all the bars?
Cleve: Last year or two.
Marvin: What if it's the ionizers?
Man: Who'd go through all that trouble?
Marvin: The cops, the pope, Jerry Falwell.
Man: This isn't a conspiracy to kill us.
Cleve: Maybe just to knock us back down to size, take our political power.

Reporter: AIDS, or Acquired Immune Deficiency Syndrome, kills four out of 10 people who acquire it, and that mortality rate might climb.
Ken: It wasn't until women started dying and babies were born with it that the CDC changed “grid” to AIDS. But it didn't matter that the word "Gay" was gone. To straight America, it was still that disease that kills fags. 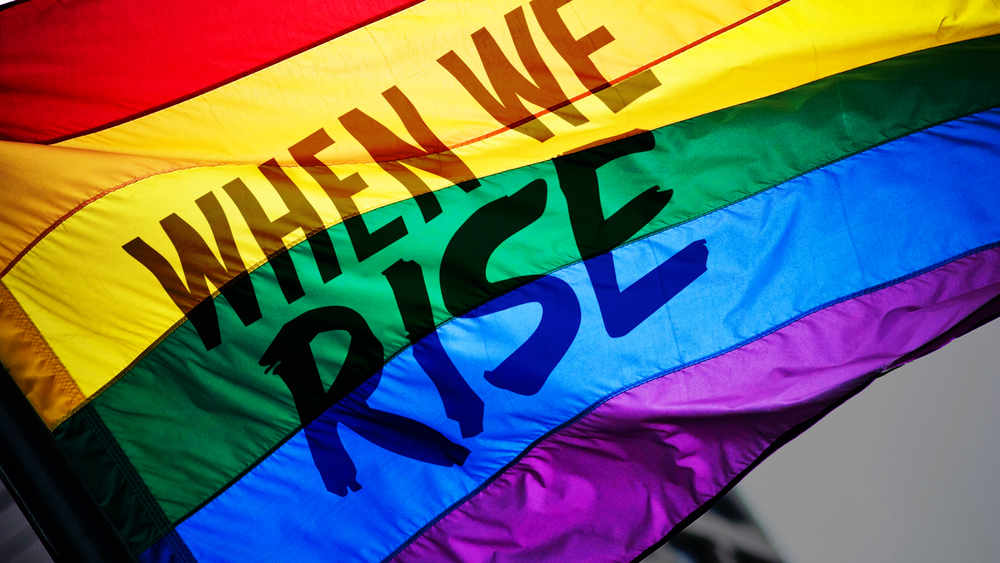 Conveniently, the bold decision of then-California Governor Ronald Reagan to oppose California’s Proposition 6 – also known as the Briggs Initiative that would legalize firing any gay teacher or support staff in California public schools – was completely ignored in an earlier segment. Reagan took a risk by publicly opposing the measure – he thought it simply wasn’t right – and was a big part in helping turn around public opinion which was originally heavily supportive of the initiative. Ironically, this counters the homophobia charges against conservatives in this re-write of history. I suppose it was too much to ask that this series give a little credit where credit is due to a conservative legend.

Though feminists and LGBT activists often dispute the stereotype of male-hating women, the real-life figures portrayed in the When We Rise series seem to contradict that claim. This becomes clear as the characters Roma and Diane (pronounced Dionne), discuss the possibility of lesbian motherhood. Roma says, “I thought the whole point was for us to make a new way to walk in the world,” but Diane replies, “I can't think of anything more mold-breaking than a lesbian having a baby without male interference.”

There is no mention of a man in this equation until later in a scene where the character Jean triumphantly announces that, “Mr. Curly Oily Sperm Donor said yes!” Such a lovely way to describe the man whose "interference" is helping you conceive a child! No male-bashing here! Diane’s lesbian friend races to their house with a sock full of “spermy nightmare” for her to inseminate herself with, which Roma’s voiceover calls “every bit of it brave, untested, brand new” as the lunar landing.

Roma: Hiding, suicide, prison, drugs, alcohol -- those were the old solutions for who we were. Now, every single thing we did to try to build a home, it was all landing on the moon, every bit of it brave, untested, brand new.

Lesbian friend: This spermy nightmare has a 60-minute shelf life. You got 20 left. You -- You want me to get you anyone?

Finally, Diane is seen talking with Roma and proudly announces her pregnancy by exclaiming, “I did it by myself!” Roma is surprised Diane wants to raise the baby with her and not with the rest of the lesbian commune and she balks, citing all the work she has to do, but Diane tells her to “recognize the value of love.” Yes, Roma, you must recognize the value of love. In the form of a sock of a “spermy nightmare.”