NBC Comedy Suggests Jesus Was Gay -- Would They Dare Say It About Muhammad? 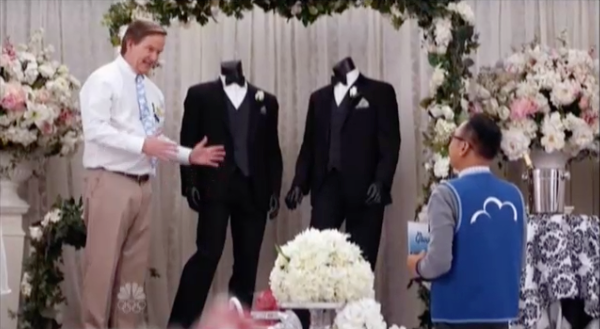 Wow. NBC went there. The freshman comedy Superstore went out of its way to offend Christians by having characters opine on Jesus’ beliefs about gays – including suggesting that Jesus Himself was gay!

To set the scene, in the episode “Wedding Day Sale,” Glenn, the religious store manager, enlists the help of Mateo, a gay employee, in creating a special gay wedding section.

Glenn explains, “I just want everyone who comes into this store to feel accepted,” which is a fine sentiment and a great way for a manager to treat his customers. But it leads to this discussion about Jesus being pro-gay marriage, pro-gay adoption, and maybe was even gay himself – a statement that FINALLY makes Glenn uncomfortable.

-Mateo: You know, I have to say, you're much more open-minded than I thought.

-Glenn: Thank you. People assume all Christians are homophobes. You know, that is ignorant. You can't imagine how hard it is being stereotyped.

-Glenn: I mean, if anything, Jesus went out of his way to accept everyone.

-Mateo: For all we know, Jesus himself was gay.

Lefty Hollywood loves poking its finger in the eye of Christians and disrespecting their religion. They think they're being edgy and provocative, but instead they're being lame and predictable.

Hey Hollywood, you want to REALLY be edgy and provocative? Try airing a scene that has characters saying Muhammad would be pro-gay marriage, pro-gay adoption, and might even be gay. Let's see how that goes!