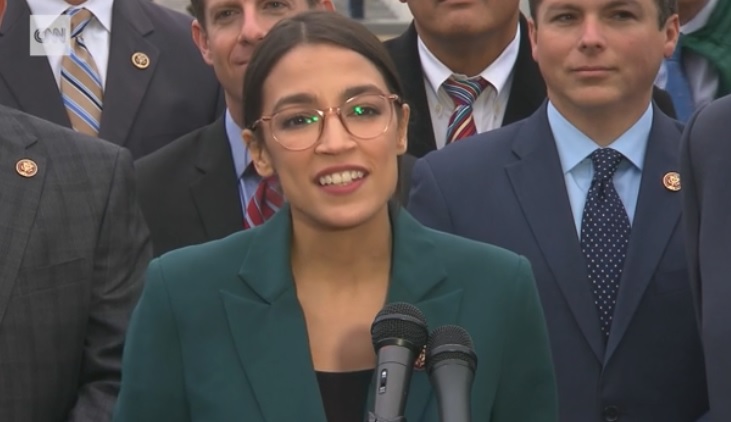 Going “green” will require a lot of green, apparently. Two U.S. legislators have a proposal designed to require substantial changes to every building in the U.S., create rail “at a scale where air travel stops becoming necessary,” replace all “combustion engine-vehicles” within a decade, and guarantee everyone a “job,” higher education, “healthy food,” and much more.

An outlandish socialist fantasy like this so-called plan that “would spend the U.S. into oblivion,” needs to be covered honestly by the news media. Especially when so many of the liberals planning to run against President Donald Trump in 2020 support it. That’s why the ABC, CBS and NBC evening news shows were loudly silent on the subject Feb. 7.

All three shows failed to cover the kooky Green New Deal proposal announced by Sen. Edward Markey, D-Mass., and Rep. Alexandria Ocasio-Cortez, D-N.Y., that very day. Their FAQ sheet claimed a Green New Deal “has momentum” including large support of Democrats and Republican voters. However, the poll those figures came from was taken before any clarity of what the plan would include or cost.

That was one very important reason for the media to cover details of the proposal. Details such as getting rid of all combustion-engine vehicles, arranging to “upgrade or replace every building in U.S. for state-of-the-art energy efficiency,” building enough high speed rail to make “air travel” unnecessary and provide government guaranteed jobs, housing, education and “healthy food.”

Those additional non-environmental, social programs even left Bloomberg opinion columnist Noah Smith seeing the Green New Deal as “unaffordable.” “This quick, rough cost estimate — which doesn’t include all of the promises listed in the FAQ — adds up to about $6.6 trillion a year,” Smith wrote.

Another reason the networks should have reported the proposal is that many of the liberals running for president want it to become law.

ABC News did cover the proposal online on Feb. 7, but excluded conservative criticism from its story. It quoted proposal creators Ocasio-Cortez and Markey, included supportive remarks from House Speaker Nancy Pelosi, D-Calif., and mentioned that left-wing critics were upset that it lacked “regulatory efforts aimed at fossil fuel production.” In other words, setting the goal to eliminate all fossil fuels and nuclear energy was insufficient for some liberals.

But there was no criticism of the cost or any of the ludicrous proposals.

ABC’s online story also ignored the socialist wish list of guaranteed jobs, education, food, healthcare, housing and “economic security for all those unable or unwilling to work” from the Green New Deal proposal.