The June jobs report was more good news for American job seekers. The Bureau of Labor Statistics announced July 6, that 213,000 new jobs were added in June.

That was more than economists expected. The prior two months were also revised up, adding another 37,000 jobs.

CNBC commentators called it a “Goldilocks” report, but only one of the three broadcast networks aired a serious report on the “booming economy.” ABC World News Tonight completely ignored the news, omitting it from its July 6, broadcast. CBS Evening News only spent 17 seconds.

The report was so good, even Jared Bernstein, who was Chief Economist and economist adviser under Obama, told CNBC’s Squawk Box, “It’s a great report.” He praised the increase in labor participation, which pushed the unemployment rate up to 4 percent.

“If you have to have it tick up, this is the way you want it: more people coming into the job market,” Bernstein noted before concluding “It does seem like there is more room to run in this recovery and that looks very good to me.”

Of the three broadcast evening shows that day, only Nightly News provided its viewers with a substantive story about the jobs market. The show spent 1 minute 45 seconds talking about the ways companies were trying to attract talent in the “booming” market. 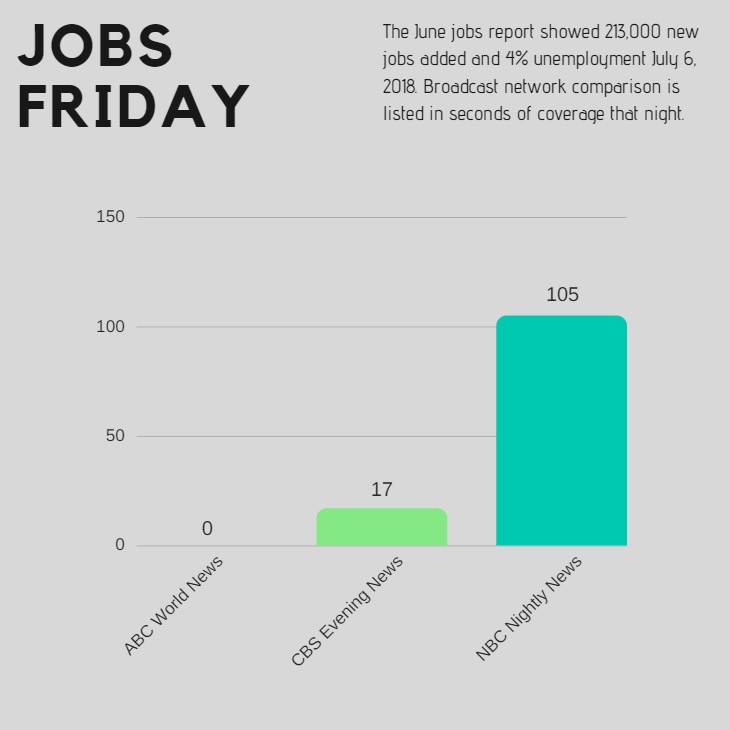 Snow continued, “The job market is so strong nearly half of American companies say they’re actually having trouble attracting workers,” before turning to correspondent Anne Thompson for the story about “big-time perks.”

Thompson interviewed employers struggling to find the talent they need, as well as the President of Manpower Group North America Becky Frankiewicz talking about the benefits employers are offering to attract qualified talent and retain employees.

“It’s a great time to be an American worker today. Workers really have the leverage to choose where, when and how they work,” Frankiewicz told Thompson. She also expects companies to have to increase wages.

The segment increased Nightly News’ lead over both the other networks in total coverage of jobs on jobs Fridays under the Trump administration to 15 minutes 54 seconds. Evening News ranked second with 13 minutes 30 seconds, while World News Tonight continued to lag far behind its network competitors with a mere 7 minutes six seconds.

MRC Latino also found silence about the latest jobs report on Spanish-language programs. Univision and Telemundo evening newscasts (and lesser-known Azteca América and Estrella TV) all failed to report the jobs gains or the national rate of Hispanic unemployment (4.6 percent) — in spite of that being the lowest Hispanic unemployment rate since the BLS began tracking the demographic in 1973. 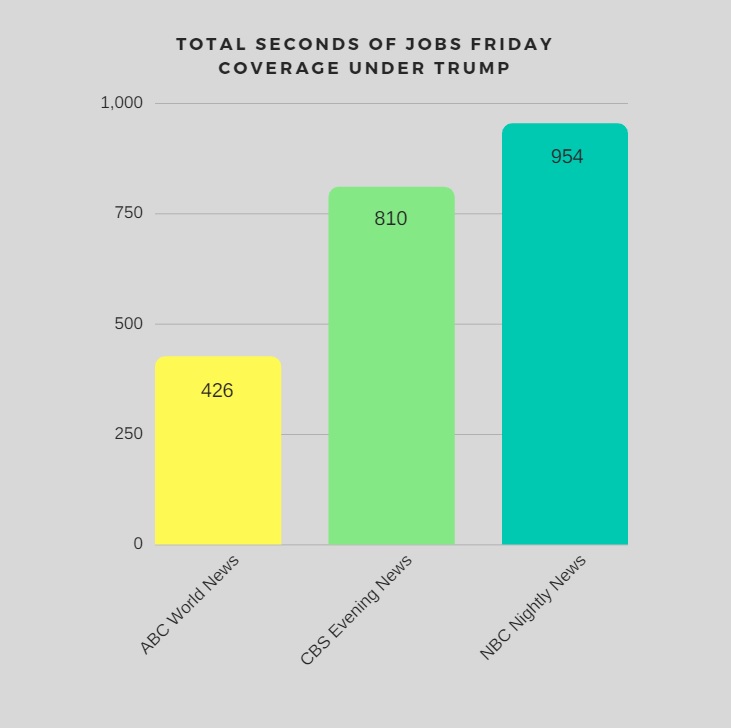 Methodology: MRC Business has been tracking the amount of time spent on jobs or employment news on the Friday of each month that the Commerce Department’s Bureau of Labor Statistics announces the latest data between Feb. 3, 2017, (the January 2017 jobs report) through July 6, 2018, (June 2018 jobs report). This time tally only reflects the ABC, CBS and NBC evening news broadcasts on those specific nights.