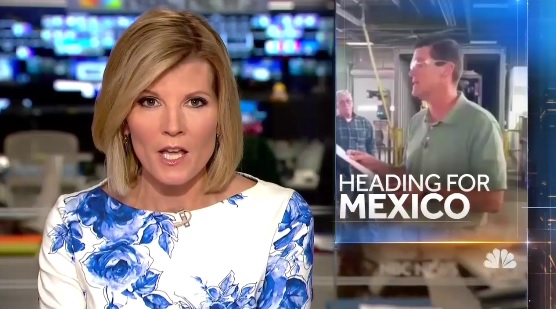 April marked the lowest unemployment rate in a decade, but that didn’t stop one NBC news show from spending far more time covering jobs being lost to Mexico.

“Hiring picked up,” that month according to CBS Evening News anchor Scott Pelley. All three broadcast network evening shows reported the “positive” jobs report which the Bureau of Labor Statistics released May 5. But the evening shows spent very little time on it that night even though the national unemployment rate dipped to 4.4 percent — the “lowest in ten years.”

The three networks combined spent just 55 seconds on the news that 211,000 new jobs were created in April, beating estimates of 185,000, and the best unemployment rate since President George W. Bush was still in office.

Two nights later, Nightly News brought up jobs again but undermined the good news with a story about how President Donald Trump hadn’t managed to stop one company’s jobs from leaving for Mexico. Anchor Kate Snow reminded viewers Trump made “keeping jobs” or bringing them back to the U.S. a “centerpiece of his administration.”

“But economists warn he will have a tough time reversing the trend, despite claiming an early success at an Indiana factory owned by Carrier Corporation. At another factory just down the road, the workers aren’t so lucky,” Snow said.

Nightly News spent a total of two minutes and 10 seconds on that May 7, story about Rexnord moving hundreds of jobs to Mexico — in spite of a Trump tweet from October.

That story about Rexnord’s outsourcing was more than eight times as long as its coverage of the “positive” U.S. jobs report just two nights earlier (a mere 16 seconds).

Correspondent Ron Mott focused on the “frustrations and uncertainty amid White House promises to bring manufacturing back,” and even found a Trump voter to criticize the president. The man who had been laid off told NBC Trump “forgot about us because he moved on to bigger and better things.”

Rexnord’s layoffs began March 27, months after the company announced its plans in 2016.