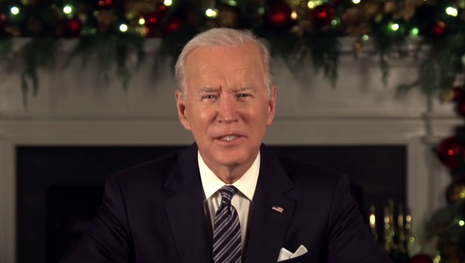 Bloomberg News co-founder Matthew Winkler had arguably one of the most ridiculous takes on President Joe Biden’s performance on the economy yet.

Winkler wrote a Dec. 20 op-ed with an outrageous headline, “Biden's Economic Performance Has Proved Unbeatable.” The piece read like a press release from the Biden White House itself. Winkler based his absurd assessment on 10 economic measures he spun to serve the pro-Biden narrative.

Here was his hot take: “America’s economy improved more in Joe Biden's first 12 months than any president during the past 50 years notwithstanding the contrary media narrative contributing to dour public opinion.” Winkler attributed his glowing praise in part to Biden’s disastrous $1.9 trillion stimulus.

The biggest distortion came from a subsection headlined, “Jobs Boom,” where Winkler claimed that “Only [former President Jimmy] Carter tops Biden for best growth in payrolls in their first year in office.” The BBC fact-checked Biden for making parallel claims concerning his performance on job growth in a Nov. 24 piece: “this job growth comes from a low base point, given that in April last year, unemployment hit its highest level since the Great Depression of the 1930s.”

In other words, it’s easy for Winkler to spin jobs growth as a “jobs boom” when you have 11 million job openings caused by businesses recovering from government-imposed shutdowns and people are just now returning to work amidst an atrocious labor shortage.

The Bureau of Labor Statistics reported Dec. 3 that “Nonfarm employment has increased by 18.5 million since April 2020 but is down by 3.9 million, or 2.6 percent, from its pre-pandemic level in February 2020.” Barron’s Magazine just released a piece headlined, “The Labor Shortage Is Creating Unprecedented Hiring Challenges. Who’s Coming Out on Top.”

But Winkler made other glaringly misleading claims. For example, Winkler said “Americans are certainly feeling good” because of a surge in consumer credit, which he said projected “high economic confidence.” But this is not true. PBS News reported that consumer confidence fell to a nine-month low in November.

The U.S. Misery Index — a measure started under President Lyndon Johnson that combines the unemployment rate and the inflation rate — spiked up again to a score of 11.01, the second highest reading in Biden’s presidency. The average for the index under Biden has been a whopping 9.88, the sixth highest reading for any president since Harry Truman.

The concept for the index is that joblessness and steep rises in the cost of living spread misery among the country’s residents. This is observably true, given that Axios just reported that “Worker pay isn’t keeping up with inflation.” But ignore all that because — wink, wink — the economy is doing just swell, isn’t it Winkler?

But even on the more positive side of the economy — GDP growth — Winkler gaslit his readers. He claimed that GDP surged at an average of 5.03 percent in each of the three quarters of 2021 and is part of what “makes Biden's first year in the White House the standout among the seven previous presidents.” Winkler said, adding that “[m]uch of the credit goes to The American Rescue Plan.” Here's the issue with that claim, as pointed out by BBC: “[A] large part of the recovery happened under former president Donald Trump.”

Manhattan Institute Senior Fellow Brian Riedl ripped apart Winkler's suggestion that Biden's "performance" on the economy was in any way "unbeatable" in comments to the Media Research Center:

Biden inherited an economy that had been shut down by the government, and ending the shutdown should of course bring a V-shaped recovery back to the original trendline. That doesn't take any skill. And in fact, the economy has not overperformed the CBO January projections of the baseline recovery with no Biden policies.

Conservatives are under attack. Contact Bloomberg News at letters@bloomberg.net and demand it distance itself from Winkler’s biased pro-Biden advocacy.