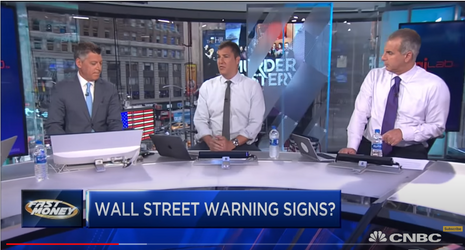 Did CNBC get its understanding of economics from the back of a cereal box? The outlet is arguing that the silver lining to skyrocketing inflation is — “rising wages.”

The liberal outlet noted how “[a]s the economy picks up in the wake of the Covid pandemic, concerns about inflation are also gaining steam.” After conceding that prices of goods are rising, CNBC took a nosedive into ineptitude: “Companies facing a labor shortage are also paying more to get workers to walk in the door.” Did CNBC even consider that rising prices of goods are eating into American pay? Bloomberg News just reported that American pay boosts “are failing to keep pace with surging prices for everyday goods.” CNBC seemed to only figure that out after the story was originally published. Its original headline was “The upside to inflation: rising wages.” The headline has since been changed to alter the entire context of the story: “It’s not certain rising wages will be enough to outpace inflation.”

CNBC’s tweet of its ridiculous story was hilariously ratioed, with over 6,500 comments and just over 1,100 likes.

The irony is that CNBC acknowledged the problem with inflation by summarizing the founder of personal finance site Money Under 30 David Weliver: “incremental wage increases are unlikely to keep pace as the cost of living rises.” The statement completely undercut its original phony argument that the silver lining to inflation was pay raises.

CNBC’s “Key Points” section also contradicted itself by admitting that prices of goods were increasing while lauding how pay was increasing at the same time. Newsflash, CNBC: rising costs of living takes away from the benefit of a pay increase.

CNBC must have realized this contradiction and changed its “Key Points” section to reflect new points entirely:

CNBC couldn’t stop contradicting its points. It even warned that economists were saying rapid increase in wages could in fact cause inflation, further undercutting the entire story:

And still, some economists fear a too-rapid increase in wages could prompt companies to raise prices and create the very phenomenon of inflation, causing more harm than good.

Perhaps CNBC is trying to do anything it can to protect President Joe Biden’s image. A recent poll by the Trafalgar Group found that a bipartisan 39 percent plurality of likely American voters blamed Biden for the rise in inflation.

Conservatives are under attack. Contact CNBC at 201-735-2622 and hold it to account for peddling misinformation about inflation and “rising wages.”