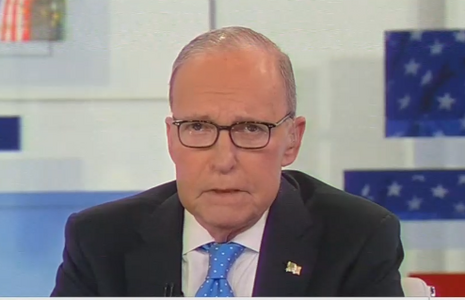 Fox Business host Larry Kudlow shocked the airwaves when he argued that the U.S. tax burden will be greater than that of communist China under President Joe Biden’s tax plan.

Kudlow stated that “America will have significantly higher tax burdens than China” if Biden achieves his goals during the May 18 edition of his eponymous show.

Kudlow said this would occur “if we jack up the corporate tax rate from 21 [percent] to 28 percent, if we increase global minimum corporate tax from ten-and-a-half to 21 percent, and if we double the capital gains tax.” In his estimation, “That’s not America first. In fact, it won’t even be America second. Because most of our European friends and our Asian friends will have much lower business and investment taxes than the U.S. will.”

Biden’s policies would mean “we go back to the days of corporate inversions, overseas domiciles, building businesses abroad rather than home” in Kudlow’s perspective. Kudlow said that the economic woes he listed would be in addition to “all the uncompetitive tax and regulatory obstacles to jobs and prosperity that we had before.”

The Fox Business host then directed viewers to a segment he did May 17 with former President Ronald Reagan’s economic adviser Arthur Laffer, economist Stephen Moore and Forbes Media Chairman Steve Forbes. The segment was a deconstruction of the liberal historical arguments for tax hikes.

Kudlow summarized that “lower tax burdens produced phenomenal — phenomenal — economic prosperity.” He then pointed to a powerful quote from his late “former boss Ronald Reagan”: “Lower tax rates mean greater freedom, and whenever we lower the tax rates, our entire nation is better off.”