WashPost BECLOWNS Itself, Praises Biden Stimulus After Saying Bill May Be ‘Mismatched’

It didn’t take long for The Washington Post to appear to act as the propaganda arm for President Joe Biden’s pork-laced $1.9 trillion stimulus package. 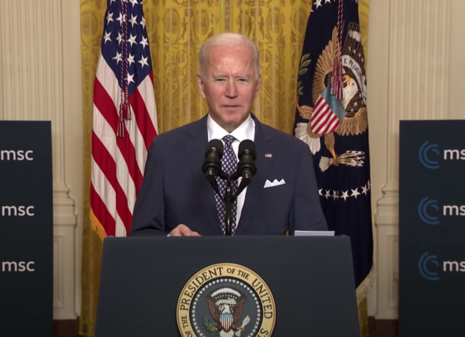 The Post slobbered all over the irresponsible spending bill in a March 6 story headlined, “Biden stimulus showers money on Americans, sharply cutting poverty and favoring individuals over businesses.” In the story, The Post treated Biden like a benevolent Santa Claus, and said his plan “represents one of the most generous expansions of aid to the poor in recent history, while also showering thousands or, in some cases, tens of thousands of dollars on Americans families navigating the coronavirus pandemic.” The Post didn’t even try to hide the stink of its advocacy for “the greatest expansion of the welfare state since LBJ,” as Politico called it.

The Post’s latest propagandized praise of Biden’s stimulus is in direct contradiction to a March 4 Post story — literally two days earlier — which had labeled the Biden plan as potentially “mismatched.” The Post story, which called into question the need for a COVID stimulus, was headlined, “As Senate rushes $1.9 trillion bill through Congress, Biden faces doubts over whether it’s still the right package.” According to that Post story,

The economy is doing better, coronavirus cases have plateaued at a high but much-reduced level, and Biden has said there would be vaccines for every American adult by the end of May. For policy experts and even members of Biden’s own party, the improving picture is raising questions about whether the stimulus bill is mismatched to the needs of the current moment, [emphasis added].

Did the hypocritical Post also forget how it characterized former President Donald Trump’s $2 trillion COVID stimulus bill last year? One story was headlined, “Trump signs $2 trillion coronavirus bill into law as companies and households brace for more economic pain.” [Emphasis added.] It’s quite a skill for The Post to have achieved inconsistency and hypocrisy at the same time, and in the same piece. 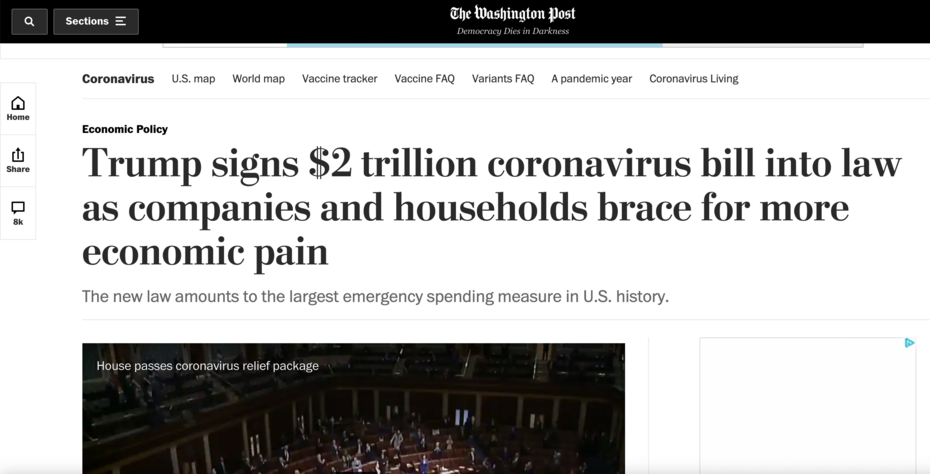 The Post’s hypocrisy, in particular, isn’t a surprise. An April 2020 Media Research Center study found that The Post had run negative headlined stories against Trump’s entire coronavirus response by a 25-to-1 margin from Jan. 17 through Apr. 25 of that year.

The March 6 Post story buried a weak reference to Trump’s stimulus efforts in 2020 in the fifth paragraph: “[Biden’s package] also lacks the bipartisan imprint of former President Trump’s bills, which directed money in larger measure to companies as well as individuals.” In addition, The Post ignored mentioning that Trump’s stimulus efforts helped “lift 1.6 million Americans out of poverty,” according to CNBC March 1. 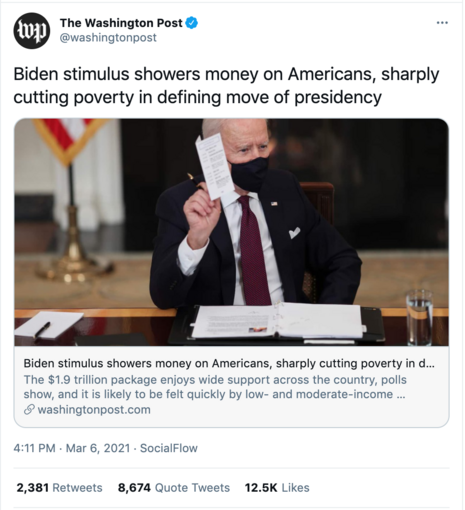 One of the "biggest criticisms" of Biden’s package was buried all the way down in the 18th paragraph of The Post story:

[O]ne of the biggest criticisms of the bill is that it is too large overall at a time when the Congressional Budget Office projects the economy is running roughly $700 billion below potential — a concept that tries to measure what a completely healthy economy would like.

Manhattan Institute Senior Fellow Brian Riedl had warned about how the left will try to spin Biden’s stimulus as an economy-saving miracle, even when previous reports have said it wasn’t needed. Riedl stated in a tweet: “[T]he Biden ‘stimulus’ will receive false credit for the huge economic growth in the 2nd half of 2021 -- even though that growth had already been projected by forecasters due to the pandemic ending & the economy more fully reopening.”

Conservatives are under attack. Contact The Washington Post at 202-334-6000 and demand it quit shilling for the Biden administration’s radical leftist agenda.