CNBC has been holding the feet of Democratic members of Congress to the fire over the disastrous implications of Sen. Elizabeth Warren’s (D-MA) insidious wealth tax. 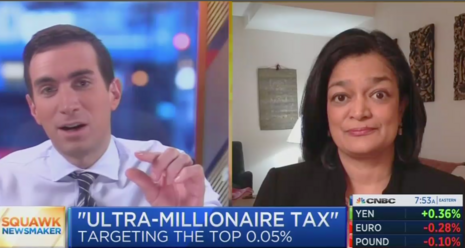 CNBC co-anchor Andrew Ross Sorkin pressed “Ultra-Millionaire Tax Act of 2021” co-sponsor Rep. Pramila Jayapal (D-WA) on the disastrous economic impact of an arbitrary two percent tax on every dollar of people's wealth exceeding $50 million. Sorkin pointed out on the March 4 edition of Squawk Box why the “two percent” figure would be problematic: “Two percent on an annual basis sounds tiny, but over the period of 20 years — or rather 10 years, even — we’re talking about 20 percent of wealth. In some cases, 30 percent of wealth.” Sorkin continued: “[T]here is a question about whether that unto itself is confiscatory.”

Ignoring the context, Jayapal reiterated the same talking point that Sorkin had just shot down as misleading: “You know, I just don’t see how you could say that two cents on every dollar over $50 million is confiscatory.” Stunning, considering Sorkin just explained in his question why the wealth tax could be considered confiscatory when you put the tax into a broader context.

Jayapal continued her gaslighting: “So, what we’re talking about is the very, very top number of families — a hundred thousand families — where wealth has been concentrated.” She then used her diversion to dubiously claim that there was “nothing confiscatory” about her plan.

Clearly dissatisfied with Jayapal’s answer, Sorkin proceeded with his cross-examination of Jayapal: “You don’t think that there’s going to be unintended consequences, um — individuals who’ll ultimately sell stock, sell their companies, sell businesses to pay, to pay for some of this?” Sorkin continued: “[O]ver time, if you’re taking 20, 30 percent — potentially even more  — 40 percent, of somebody’s company from them, they’re probably going to have to sell.”

A similar incident happened during the March 2 edition of Squawk Box when co-anchor Joe Kernen played devil’s advocate in an attempt to expose the lack of logic behind Warren’s tax proposal. Kernen asked: “[W]hy not make [the wealth tax] truly progressive and do 10 percent [tax] at a billion [dollars], do 20 percent at 10 billion [dollars]?” Warren dodged the question entirely: “So, look, um, you know, I’m just a girl from Oklahoma. I think $3 trillion actually sounds like a lot of money.”