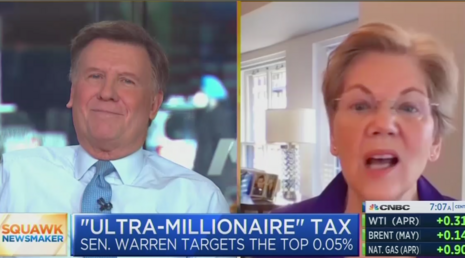 Kernen continued his unique line of questioning: “Why not do it that way once you get started and raise some real money? What would be the problem? Why would [Amazon founder and CEO Jeff] Bezos do three percent when some poor schmo at only 50 million [dollars] does two percent?”

Clearly caught off guard, Warren avoided the question and pivoted to her claim that her plan would raise $3.75 trillion in revenue over the next ten years: “So, look, um, you know, I’m just a girl from Oklahoma. I think $3 trillion actually sounds like a lot of money. And raising $3 trillion that we can reinvest in our economy.”

Kernen continued to press Warren, saying, “This looks to me like we’re changing the rules of the game that go back centuries for — if you’ve paid your taxes on the way in and accrue this. And a lot of these people would rather do really good things with the money then that they don’t think the government does it well.”  Kernen rephrased his first question to Warren: “Why not make it five percent or 10 percent on people that are really loaded?”

Warren dodged the question again, “Okay, I’m loving this morning. I cannot believe that I’ve gotten you to say that we should tax the rich more, Joe.” She then tried to equate her wealth tax idea to real estate taxes. Warren threw Kernen’s question back to him with a nonanswer: “Now, I hear you about the percentages. You want to make the argument to pay an even greater percentage? Make the argument.”

The Congressional Budget Office estimated that federal spending will total a gargantuan “$67.0 trillion (22.3 percent of GDP)” between 2021 and 2031, according to the Committee for a Responsible Federal Budget. This means Warren’s unrealistic 10-year revenue plan would only account for .056 percent of projected federal spending over the same time period.