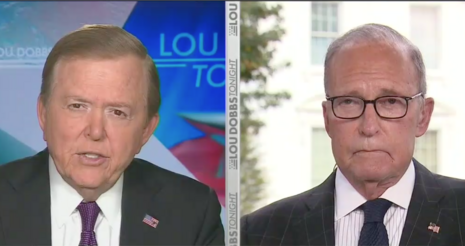 During a September 9, segment of Lou Dobbs Tonight on Fox Business, Kudlow pointed to numerous positives illustrating the strength of the American economic comeback: “We are getting ourselves a much stronger recovery than a lot of people anticipated.” He continued: “Getting the unemployment rate, quickly, to single digits — 8.4 percent — virtually no one expected that before the year-end or even next year.” Specifically, “we’ve created 10.6 million new payroll jobs. We’ve created 14 million new household jobs. Those are big numbers in four months.” He acknowledged that there’s still a lot of work to do.

Kudlow then laid down the hammer against those on the left, including the media, who have consistently downplayed the economic recovery as only benefiting the wealthy:

“I want to note one thing, Lou. So many people — I don’t know, there’s a lot of ankle-biting going on. I know it’s a political season — saying, ‘Well, it’s just the well-to-do that are improving now in this period of the pandemic contraction.’ Well, guess what. Seventy percent of those jobs come from low-paying industries — low-pay industries, OK! Retailing, hospitality, restaurants and the low-end healthcare people.”

But Kudlow didn’t let up, and proceeded to vent his frustration that the way the “ankle-biters” are behaving is the same way they did concerning the 2017 tax cuts. Kudlow stated: “But the fact that people keep harping and ankle-biting on this — and it’s just like the tax cuts, Lou.”

According to Kudlow, “After the tax cuts, right? So many ankle-biters said: ‘only the rich people benefit.’ In fact, and I mean fact — to underscore,” it “was the middle-income, it was the blue-collar boom, it was the lower-middle class jobs and wages that grew faster than the upper-wages.”

Kudlow reiterated his previous prediction that the recovery is a “V-shaped recovery.” He estimated that in “the second half of the year,  you’re going to get 20 percent-plus in Q3 and probably Q4.”

It is already clear that the liberal media in particular will either ignore or downplay any good news in the economy and the market if it has the slightest chance of elevating President Donald Trump’s economic image.