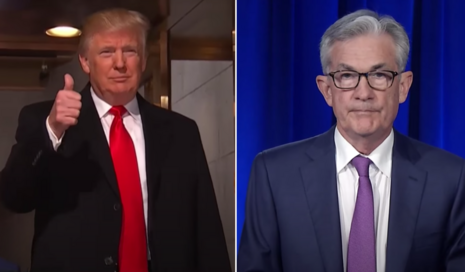 That’s wildly different from the “economic disaster” The Times speculated could happen under a Trump presidency in 2016.

The Times story, headlined “The Fed Enabled a Record Expansion. Trump Is Taking Credit,” argued that “Mr. Trump’s story line about his economic track record, particularly what he showcased during his Republican National Convention speech last month, leaves out a crucial detail.” It continued: ”Lucky timing and a patient Federal Reserve were pivotal in driving the strong labor market of the late 2010s, economists said.” Back in June, 2016, The Times published a story headlined: “Would a Trump Presidency Mean Economic Disaster? Let’s Take a Look.”  So it would have been Trump’s fault had the economy spiraled in the first years of his presidency, but since the reverse happened, vive la Fed! 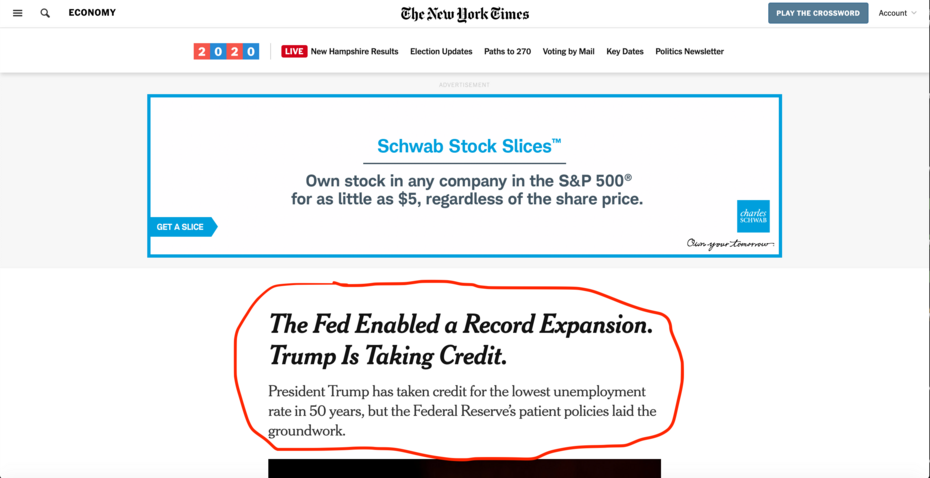 The 2016 Times assessment was based on a report from Moody’s Analytics that warned against a Trump presidency. As The Times wrote, “[the report's] underlying assumptions about what Mr. Trump would do as president and how the effects of those policies would ripple through the economy are plausible, and squarely within the mainstream consensus view among economic forecasters about how the economy works.” [Emphasis added.]

The Times did at least concede that a flaw in the Moody model was that it attempted to give “exact numerical forecasts on effects that have vast amounts of uncertainty.”

The Times didn’t give such enormous credit to the Fed when former President Barack Obama’s presidency was coming to an end in 2016: “President Obama Is Handing a Strong Economy to His Successor.” Nowhere in that puff story did The Times note that “[t]he Fed was the only game in town when it came to economic stimulus in 2013,” according to The Business Journals in 2013. [Emphasis added.]

Also, according to RealClearMarkets August 24, 2016, “The Fed's policies have lowered deficits substantially during the Obama years in large part because of lower borrowing costs but also because of the earnings the Fed has booked on its unusual program of asset purchases.” The Times ignored that in its 2016 praise of Obama’s economy.

The only credence given to Trump’s policies in the latest Times story were weak, downplayed honorable mentions. For example, “The Trump administration’s tax cuts and higher government spending temporarily nudged the economy, but the trade wars cooled it off, so the administration’s track record was mixed.”

Concerning Trump’s economy, a July, 2019 Wall Street Journal editorial noted: “Time to wake up from the Barack Obama economy, folks, and admit how many more Americans are prospering from the faster economic growth and tighter labor market after the policy changes of 2017.” It continued: “The Trump Administration has for the most part focused on growth. Its policy mix of deregulation and tax reform has unleashed more private investment and job creation that has lifted productivity and wages for the non-affluent.”

It would appear that The Times had no problem giving Obama credit for his “strong economy,” anemic as it was. But when Trump defies doom-and-gloom predictions and oversees impressive economic growth in his first term, The Times wants to ignore its own 2016 prediction and credit the Fed.