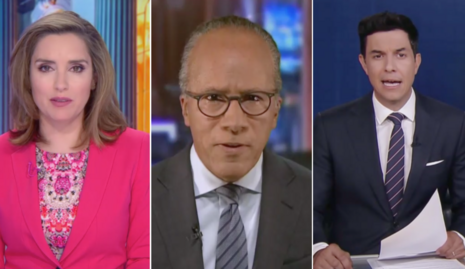 The Big Tech-heavy NASDAQ Composite stock index closed at a record 11,108.07 Thursday evening, well over the historic 11,000 milestone, according to Nasdaq August 7. “A big reason for the market’s second-half momentum today was this week’s better-than-expected jobless claims report,” Nasdaq reported. "[N]early 1.19 million" filed jobless claims, but that marks “the lowest level since the pandemic began.” CNBC reported that this was the NASDAQ’s “seventh straight gain.”

According to comments to CNBC by Jefferies money market economist Thomas Simons on the jobless claims report:

‘The overall tone of the jobless claims data is the best it has been in 3 weeks or so. The decline is the biggest since the week of June 6, so the data does not have the same sort of ‘stalling out’ theme that we have seen in recent weeks.’

That context was apparently not worth reporting by ABC World News Tonight or CBS Evening News.

ABC World News Tonight and NBC Nightly News did find room in their reporting to express outrage at Trump for “seizing” on Biden’s latest racial gaffe. In a recent interview, Biden stated: “What you all know, but most people don't know, unlike the African-American community with notable exceptions, the Latino community is an incredibly diverse community with incredibly different attitudes about different things.”

This latest display of propaganda journalism is just par for the course for the Big Three.