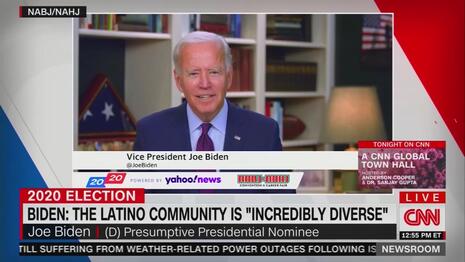 oe Biden keeps putting his foot in his mouth when talking about black voters, yet the media consistently rationalizes or covers up their candidate’s mistakes.

After CNN ignored Biden asking a black reporter if he was a "junkie," yesterday, CNN Newsroom host John King went on the defense for yet another racial gaffe from the Democrat presidential candidate that made news today. Like the "junkie" gaffe, this one also happened during an interview for the National Association of Black Journalists and National Association of Hispanic Journalists Convention.

This latest comment reinforces how Biden tried to bully black voters back in May saying if you don't vote for him, "you ain't black." King didn't bring that up. Instead, he played a clip of President Trump slamming Biden’s comments as “insulting.” But King questioned if this really was insulting.

"Is it very insulting?" the CNN host posed to his guest, former “Race and Ethnicity writer” for AP, Errin Haines. Before she could even answer, King defended Biden’s comments:

Errin, let me start with you, is it very insulting? Did Joe Biden disparage and insult the black community? He was trying to make the point and maybe he didn't make it as articulately as he would have liked, that -- I believe the point he was trying to make was most African-Americans overwhelmingly support Democrats and if you travel the country and you go to Florida, for example, you have the Cuban American population or you might have a Puerto Rican population that has moved to Florida that has a different views than say a Latino in Nevada or  Arizona. Is it disparaging and insulting what the former vice president said?

Not wanting to hurt Biden’s feelings, Haines critiqued his comments in the most delicate way possible:

I think that that is right, John, that was maybe inartful contrast that the vice president was trying to make and then obviously you saw President Trump seizing on that saying that he is attempting to make inroads with the black community which is not really -- did not really support him in 2016 and is not really expected to support him by bigger numbers in 2020 so that kind of inartful remark did present an opening for President Trump that did provide kind of a rare real time exchange and frankly a little bit news being made out of the NABJ and NAHJ convention which started yesterday and is continuing through the week.

But perhaps the most telling part of this exchange was the CNN chyron on screen. Not only was it devoid of the usual snark and fact-checking, but it completely left out the controversial part of Biden’s comments! It read, “Biden: The Latino Community Is ‘Incredibly Diverse.’

After getting that scathing criticism of Biden out of the way, King turned the conversation back onto Trump being the real racist candidate. He then made a baseless accusation that Trump had attempted to suppress black votes in the 2016 election:

Jeff, to that point, Errin makes a point that if you look at the polling, the president’s support among African Americans is pretty bleak. We have watched in the wake of George Floyd and the racial reckoning and protests across the country there does not seem to be a lot of an opening for the president there and yet he sees an opportunity and I think much as he saw he tried to suppress the African-American vote in the 2016 campaign.

King went on to claim that Trump’s strategy was different this election, because he was getting Kanye West on the ballot so black voters would flock to him instead of Biden.

If you want to see how far Biden’s media fans will go to rationalize his racial gaffes, see here how former CNBC, now CNN hack John Harwood spun the former VP's “clean and articulate” comments about President Obama before the 2008 election.

Here are some more recent examples of Biden’s racial gaffes being defended or ignored by the supposedly “woke” media:

CNN working as hard as possible to protect Biden from scrutiny was brought to you by Inventhelp and USAA.