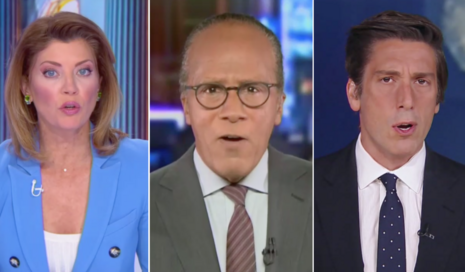 The Dow Jones Industrial Average closed above 27,000 Wednesday, “extending a market rally and returning the index to a level it first hit a year ago and last touched in early June,” according to The Hill. The new figure (27,006) put "the Dow within striking distance of erasing its losses for the year.” ABC World News Tonight with David Muir, CBS Evening News with Norah O’Donnell and NBC Nightly News with Lester Holt all censored the news last night.

By contrast, consider when the Dow dropped 1,000 points beneath 25,000 before rallying a bit later Feb. 28 to cap off Wall Street’s “worst week since the [2008] financial crisis.” On that day, the Big Three gave the negative market news a whopping 313 seconds of coverage collectively — or more than five minutes.

That’s 313 seconds for negative news versus 0 seconds for positive news. Seems like a pretty massive bias.

Even though the Dow has been reported to be on track to virtually “erasing its losses for the year” months later, the Big Three clearly did not consider this to be worth equal or greater coverage.

But the Dow’s performance isn’t all the good market news yesterday had to offer last night. “Sales of previously owned homes rose 20.7% in June over the prior month to a seasonally adjusted annual rate of 4.72 million,” according to The Wall Street Journal July 22. This, according to The Journal, was “the biggest monthly increase on record going back to 1968.” [Emphasis added.]

The amount of good market news the Big Three have censored continues to expand like an over-inflated balloon.

When the May jobs numbers were revised upward by a whopping 5.825 million, all three evening news shows censored that story. They also censored when U.S. stocks “wrapped up their best quarter in more than 20 years.”