ABC’s, CBS’s and NBC’s evening news shows are apparently allergic to any good news that bolster’s the image of President Donald Trump’s economy. 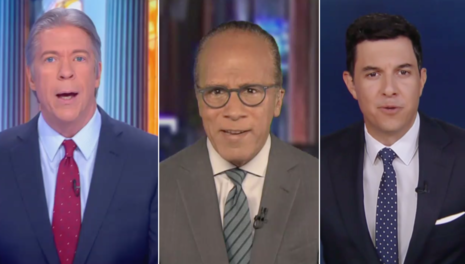 Along with news that private payrolls rose “by 2.369 million in June, a bit below the 2.5 million estimate from economists surveyed by Dow Jones,” some eye-popping news from a new employment report by ADP Research Institute and Moody's Analytics dropped. “May's number saw a stunning revision, going from an initially reported loss of 2.76 million to a gain of 3.065 million,” according to CNBC's summary of the report July 1. Issues & Insights reported the same day: “That’s more than 5 million people returning to work in just two months.” Issues & Insights also “bet the networks also ignore[d] this week’s ADP Report.” The publication’s bet was spot-on. [Emphasis added.]

The Big Three have gone 0-for-2 just in the past two days ignoring good market news.

During the June 30 evening newscasts, all three networks censored how U.S. stocks closed their best quarter in 20-plus years. The Wall Street Journal proclaimed that this was a “remarkable rally after the coronavirus pandemic brought business around the world to a virtual standstill.” Apparently, it wasn’t remarkable enough to make the evening news coverage by ABC, CBS or NBC.

But that wasn’t all the good news the Big Three have censored so far this year.

When U.S. retail sales soared a whopping 17.7 percent in May, for the “biggest monthly jump ever,” ABC World News Tonight and NBC Nightly News censored this news.

Dropping coverage of market news when it doesn’t fit the liberal agenda to zing Trump at every turn is an embarrassment to journalism. Shame on ABC, CBS and NBC.