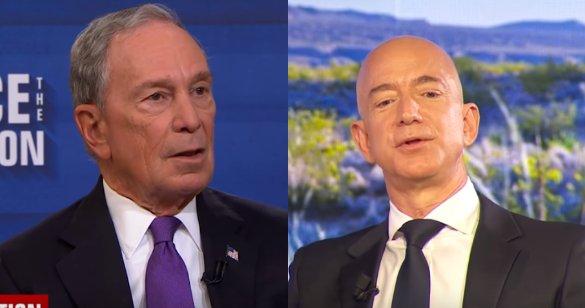 A LexisNexis search revealed that The Post ran at least 122 stories (a mix of news and opinion) that mentioned Bloomberg’s potential candidacy or actual bid for the White House between Nov. 9, 2019, and Dec. 9, 2019. MRC Business found that 121 of those stories failed to mention that Washington Post owner Jeff Bezos reportedly asked Bloomberg if he would consider entering the 2020 race earlier in the year, according to Vox Recode Nov. 9, 2019.

That meant 99 percent of The Post’s stories about Bloomberg within a month’s period ignored a glaring bias. For example, The Washington Post’s Editorial Board wrote a Nov. 9 “Post’s View” story, where they argued that a case for “Mr. Bloomberg’s entry, if it does indeed occur, is that the Democrats have veered too far to the left, Mr. Biden is too ineffectual to win,” and that other candidates of “moderate temperament” were of “negligible significance.”

The Post’s Jonathan Capehart, who is currently a member of The Post’s Editorial Board, wrote in a Nov. 11, op-ed that “Bloomberg would make an excellent president” [emphasis added]. Both stories, along with 119 others, ignored reporting or including editor’s notes mentioning that Bezos reportedly asked Bloomberg to run for office, a potential conflict of interest.

The Society of Professional Journalists Code of Ethics clearly states that journalists should “Avoid conflicts of interest, real or perceived. Disclose unavoidable conflicts.” It also states that journalists should refuse credibility-harming “special treatment” and should “Avoid political and other outside activities that may compromise integrity or impartiality, or may damage credibility.”

Only one story (apart from the other 121), written by The Post’s Jeff Stein on Nov. 9, in a paragraph buried toward the bottom half of the piece, mentioned briefly that Bezos had reportedly encouraged Bloomberg’s candidacy.

The Washington Post’s Editorial Board released another “Post’s View” opinion on Nov. 16, which gave a quasi-defense for billionaires.

In the piece, the Editorial Board mentioned that “a far wealthier man [than Eugene Meyer], Jeff Bezos, bought The Post six years ago from Meyer’s civic-minded descendants, the Graham family, and has given the paper a chance to prosper while continuing the Grahams’ hands-off-the-news tradition” [emphasis added], in response to a self-raised question about whether The Post’s views were shaped by their experience with their wealthy owners.

In the same piece, they also mentioned Bloomberg’s candidacy. But The Post editorial board ignored mentioning that their billionaire owner had reportedly requested Michael Bloomberg run for office:

“The ‘billionaire class,’ as some call it, seems no more unified than the nation as a whole, with George Soros bankrolling causes and candidates on the left and Joe Ricketts on the right. One billionaire, Tom Steyer, may soon find himself competing with another, Michael Bloomberg, for the privilege of running as the Democratic nominee (against yet a third billionaire, President Trump). Both men, despite their essentially unlimited funds, are very long shots” [emphasis added].

This story was released roughly a week after The Post’s owner Bezos’ reported political biases were made known.

Another story, written by The Post’s Media reporter Paul Farhi Nov. 11, explored the potential conflicts of interest that Bloomberg’s own news company, Bloomberg News, would suffer when it was still a question whether the liberal billionaire would actually run.

Fahri wrote: “[H]is running would inevitably raise internal questions, such as whether Bloomberg News can fairly cover its founder.” In the piece, Farhi neglected to mention that his company’s owner Bezos reportedly encouraged Bloomberg to run.

Fahri did mention Bezos in his piece, albeit without denoting The Post’s owner’s reported political bias:

“Questions about journalistic conflicts have irregularly come up about other wealthy owners of media properties. The Washington Post is owned by Amazon founder and chief executive Jeff Bezos, a fact regularly disclosed online or in print when Bezos or Amazon are covered by The Post” [emphasis added].

In fact, at least seven Washington Post stories mentioning both Bloomberg and Bezos in the same piece were written without revealing Bezos’ reported encouragement of Bloomberg to run in 2020.

Another Washinton Post story dated Nov. 15th addressed Bloomberg’s plan to spend $100 million on anti-Trump digital advertising in key swing states. The piece’s authors, Michael Scherer and John Wagner mentioned that “The effort will provide a significant boost to Democratic efforts — now totaling at least $325 million in public commitments — to keep the heat on Trump while Democratic candidates battle each other to win the party’s presidential nomination.”

But there was no mention of Bezos or the potential conflict concerning The Post owner’s reported encouragement of Bloomberg to enter the race.

Sullivan did mention that her paper, The Washington Post, is owned by Amazon founder Jeff Bezos, but her article also fell short of disclosing that Bezos reportedly asked Bloomberg months ago if he’d consider running for president. She had no problem pointing the finger at Bloomberg News and its decision to prohibit its reporters from investigating its owner Michael Bloomberg or his 2020 Democratic Party rivals, though.