Fox News exposed climate czar John Kerry’s over 300 metric tons of hypocrisy — and that’s just since the beginning of the Biden administration. But not one of the Big Three evening news shows gave the shocking report any coverage. 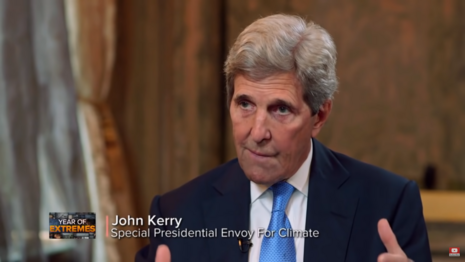 President Joe Biden tapped Kerry as the country’s first ever Special Envoy for Climate on Jan. 20, 2021. In the roughly 18 months since, Kerry’s private jet made a total of 48 trips and emitted an estimated 715,886 pounds, or 325 metric tons of carbon, according to a July 19 Fox News report.

And to make things worse, the average carbon footprint for a person in the U.S. is 16 tons annually, according to the environmentalist group Nature Conservancy. In other words, it would take the average American more than 20 years to even come close to the level of carbon that Kerry’s jet fired out in just a year and a half. [Emphasis added].

Unsurprisingly, ABC World News Tonight, the CBS Evening News and NBC Nightly News completely ignored the report. Fox revealed that arguably the most famous environmentalist politician in the U.S. is also one of the country’s worst climate hypocrites; but apparently that wasn’t worth even a few seconds of evening news coverage.

This is the same Kerry who said at the Petersberg Climate Dialogue just days ago: “We all have to be able to reduce the emissions. We have to accelerate the transition. We’re behind.”

ABC, CBS and NBC’s complete lack of reporting on Kerry’s hypocrisy comes as no surprise, as the Big Three have staged adoring interviews with Kerry on saving the world from climate change. Kerry told ABC Chief Meteorologist Ginger Zee in September 2021 that “What we need to do [on climate change] is behave like adults and get the job done.”

In another embarrassing display of “Do as I say, not as I do,” Kerry trumpeted his appointment as climate czar in November 2020: “America will soon have a government that treats the climate crisis as the urgent national security threat it is.” Apparently taking on the “crisis” doesn’t include capping his own emissions.

Kerry has consistently called for a “green transition” away from fossil fuels and even said that the U.S. should shut down existing power plants. That is despite the current energy crisis brought about in part by his boss’s war on fossil fuels. The North American Electric Reliability Corporation “reported that more than half the nation will be at elevated risk of power outages this summer,” according to the House Energy and Commerce Committee Republicans.