Psaki ran ahead of the jobs report during Monday’s press conference: “Because omicron was so highly transmissible, nearly nine million people called out sick in early January when the jobs data was being collected,” Psaki explained to reporters. “[T]he week the survey was taken … was at the height of the omicron spike.”

She continued, “As a result, the month’s jobs report may show job losses, in large part because workers were out sick from omicron at the point when it was peaking.”

Psaki’s propaganda push was followed by a chilling new jobs report by the Automatic Data Processing Research Institute, an economic research group, that showed employment tanked in January by hundreds of thousands of jobs.

In preparation for job numbers to be released, Psaki makes it clear that 9 million people called out sick because of omicron at the time data was taken. <a data-cke-saved-href=">pic.twitter.com/j1fsJGwWfK — MRCTV (@mrctv) January 31, 2022

“Private sector employment decreased by 301,000 jobs from December to January,” according to ADP’s January National Employment Report. Small, medium and large businesses were all hit hard, but small businesses suffered the most with 144,000 job losses month to month. Small businesses alone lost almost as many jobs as medium and large businesses combined, which dropped 157,000 positions. The leisure and hospitality industry lost an astronomical 154,000 jobs; trade, transportation, and utilities lost 62,000 jobs; and manufacturing lost 21,000 jobs. This was the “first time ADP reported negative job growth since December 2020,” reported CNBC.

ADP’s National Employment Report was just more evidence that the Biden administration has gaslighted Americans on the economy.

CNBC Finance Editor Jeff Cox explained the significance behind the harrowing ADP report (emphasis added): “Private payrolls fell by 301,000 for the month, well below the Dow Jones estimate for growth of 200,000 and a marked plunge from the downwardly revised 776,000 gain in December.”

In other words, the Dow Jones growth prediction was off by 501,000 jobs. 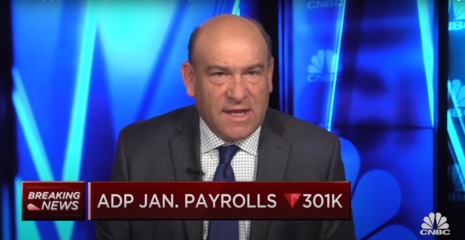 Psaki wasn’t the only one who attempted to gaslight the American people. Her boss — President Joe Biden — posted an absurd tweet Feb. 2 about how great the economy was last year. “2021 was the greatest year of job growth in American history,” the President wrote.

Former investment banker and entrepreneur Carol Roth gave a smart response to Biden’s spin on the economy: “If you burn down a house and it gets rebuilt, you have not ‘created new housing’; you replaced it. The same goes for jobs; the govt closed businesses and ‘burned down’ the jobs associated with them. Those that have been reclaimed does not equate to ‘creating new jobs.’”