Woke former Disney CEO Bob Chapek announced hiring freezes and mass layoffs last week after the company took a massive dip. Little did he know he was one of the first to go. 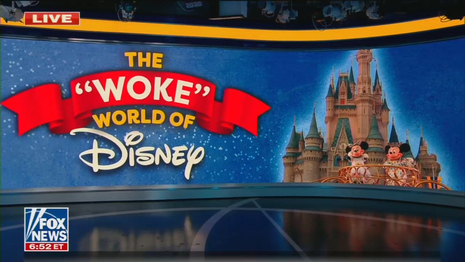 So goes the tired phrase, but the woke media doesn’t seem to pay attention. The Hollywood Reporter, CBS and CNN cited Chapek’s failure to be woke enough as one of the reasons for his departure.

Disney announced Sunday that Bob Iger would return as the company’s CEO for at least the next two years after his nearly three-year retirement. Disney’s market cap sank nearly $100 billion during Chapek’s woke three years at Disney, according to Newsweek. Breitbart reported on Nov. 12 that Disney shares are down 62 percent this year.

Governor Ron DeSantis signed the bill into law in March and in June it effectively banned schools from teaching kindergarten through third-grade students about sexual orientation or gender identity.

The Hollywood Reporter pointed to “Disney’s response (or lack thereof)” to Florida’s Parental Rights in Education Act as one of the reasons for Chapek leaving. CBS cited “blowback” for “not using Disney's vast influence in Florida to quash a Republican bill that would prevent teachers from instructing early grades on LGBTQ issues.” CNN elaborated further noting that Chapek was “forced to apologize for his silence on Florida’s controversial bill after initially declining to comment on it.”

Iger, however, did comment on the Parental Rights in Education Act in March, when he told CNN host Chris Wallace, it “just seemed wrong” and was “potentially harmful to kids.”

Manhattan Institute fellow and City Journal contributing editor Chris Rufo called Iger’s return a “Huge rebuke of woke leadership” and noted it “Will be interesting to see if Iger, who is also left-wing, dials back the politics” in a tweet thread. Rufo explained that “After Chapek's disastrous fight with Gov. Ron DeSantis, Disney+ domestic subscriber growth collapsed, public approval dropped, and the stock price plummeted. Other causes contributed (economy, streaming saturation), but the timing suggests they paid a price for the DeSantis fight.”

Former House Republican candidate Robby Starbuck (TN) warned optimists. “Don’t fool yourself into thinking Disney has learned the error of their woke ways by bringing Bob Iger back as CEO,” he said in a tweet. “Iger laid the woke foundation. He’s a leftist. He seriously considered running for President against Trump in 2020. He’s a woke cheerleader just like Bob Chapek.”

Conservatives are under attack. Contact The Walt Disney Company at TWDC.corp.communications@disney.com and demand the company stop shoving woke propaganda down the throats of children.