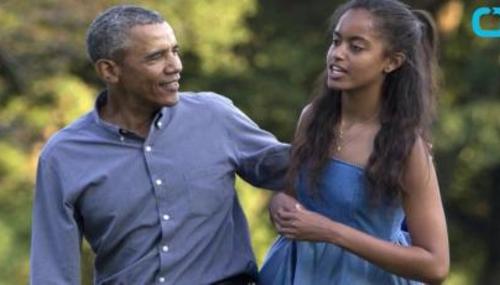 Tom Blumer
September 13th, 2016 1:46 PM
It's clear that GQ.com isn't at all interested in consistency, and that it doesn't care if it gets caught employing a blatant double standard. Catching them at it was just too easy. In the wake of the latest reported incident involving President Barack Obama's 18 year-old daughter Malia — she has been photographed while playing the drinking game Pong in Maryland, a state where, as in the rest of…

Nathan Burchfiel
August 2nd, 2010 2:04 PM
Did you hear Chelsea Clinton got married over the weekend? If it seems like that's all the media talked about, you're not alone. The broadcast networks - ABC, CBS and NBC - aired 87 stories about Clinton's July 31 nuptials between July 25 and August 1. Four major newspapers - The Washington Post, The New York Times, the Los Angeles Times and USA Today - printed 21 stories during the same time…

Brad Wilmouth
July 29th, 2010 12:03 AM
On Monday’s Joy Behar Show, when the topic of Chelsea Clinton’s upcoming wedding came up during a panel discussion, host Behar found it "ironic" and "over the top" that the Clinton family are spending $2 million on their daughter’s wedding, comparing it to the $100,000 spent by former President Bush on daughter Jenna’s wedding. After comedian Judy Gold noted the $2 million price tag, Behar…

Tim Graham
August 31st, 2009 9:09 AM
NBC's Today picked up Jenna (Bush) Hager to be an occasional correspondent on education for the morning show. If the Bushes instead of the Kennedys were the "royal family" of American politics, it would be like NBC's use of Princess Diana's brother years ago. Get a load of how Justin Moyer of the Washington Post cattily greeted the news in the Style section: The bar-hopping and boozing are a…

Jenna's Wedding: An Excuse for Cheap Media Shots at Her, and Her Fathe

Tom Blumer
May 9th, 2008 9:35 AM
I noted a few weeks ago (at BizzyBlog; at NewsBusters) that Mike Celizic at MSNBC couldn't get though his article about Jenna Bush's upcoming wedding without bringing up her misdemeanor arrests from seven years ago. Julie Mason of the Houston Chronicle also went there in a late Thursday report. She also threw in a number of shots at Jenna's father, his administration, and his hometown: Saturday…

Tom Blumer
April 15th, 2008 9:15 PM
So I'm reading what is supposed to be a puff piece by Mike Celizic in the Today Show section at MSNBC about Jenna Bush's upcoming wedding to Henry Hager on May 10. It seems to do a serviceable job of describing their upcoming nuptials, what the attendants will wear, where it will be (an informal affair at the Bush family Crawford, Texas ranch), where they met, where he proposed. All nice stuff.…

Noel Sheppard
February 11th, 2008 1:20 PM
As NewsBusters has been reporting, MSNBC's reaction to David Shuster's "pimped out" Chelsea Clinton comment is an extraordinary example of the double standard that exists at this admittedly left-leaning cable network. In fact, the goings-on since Shuster first made this remark last Thursday make it crystal clear that potentially insensitive comments directed at the Clinton family are thoroughly…

Jenna Bush Calls Her Dad While on 'Ellen

Noel Sheppard
December 5th, 2007 4:58 PM
Here's something you don't see every day: the daughter of the President calling her dad while doing an interview on national television. Yet, that's what happened on "Ellen" Wednesday (taped Tuesday) when host Ellen Degeneres didn't believe guest Jenna Bush could just pick up the phone and call her dad any time she wanted.Marvelously, Jenna ended up being right. What follows is the partial…

Time's Tired Trope to Jenna Bush: Why Aren't You in Iraq

Warner Todd Huston
September 28th, 2007 5:51 AM
When we voted for Jenna Bush to lead the war in Iraq, we all thought she would always be ready and able to lead the discussion in the press about that important issue... Oh, wait. No one voted for Jenna Bush for anything, much less to make Iraq policy. This fact, then, makes it curious that the AP would give us a piece titled "Jenna Bush Ducks Iraq, Talks Engagement." Why, exactly, the AP would…