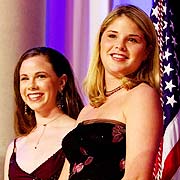 When we voted for Jenna Bush to lead the war in Iraq, we all thought she would always be ready and able to lead the discussion in the press about that important issue... Oh, wait. No one voted for Jenna Bush for anything, much less to make Iraq policy. This fact, then, makes it curious that the AP would give us a piece titled "Jenna Bush Ducks Iraq, Talks Engagement." Why, exactly, the AP would think Jenna Bush is the one to ask questions about Iraq during an interview about her marriage plans is anyone's guess. What kind of headline is that anyway? The subhead is even worse, "In Book-Promoting Interview, First Daughter Avoids Iraq Questions, Discusses Her Romantic Engagement Story." This is just another example of the APs Bush Derangement Syndrome where they cannot even have a nice, happy story about the daughter of the president announcing her engagement and talking about helping the poor without badgering her about policies she has nothing to do with.

Now, this story headline might be understandable if Jenna Bush was spouting off about Iraq and her father's policies. But her press conference was not about that at all. Jenna was touting "Ana's Story," a new book about the life of a 17-year-old Latin American mother with AIDS. She also talked about how her boyfriend proposed to her on a mountain-top during the sunrise.

So, with this story of 13 paragraphs, we get all sorts of "news" of the president's daughter with only two about Iraq, and some of the last ones in the story, at that.

On other issues, Jenna Bush ducked a question about whether she agreed with her father about the war in Iraq, but she said she understood critics who argue that she and her twin sister, Barbara, should serve in Iraq.

"Obviously I understand that question and see what the point of that question is for sure. I think there are many ways to serve your country. I think ... what's most appropriate for me to do is to teach or to work in UNICEF and represent our country in Latin America."

She should have told you to pound sand, AP.

Now, certainly the Iraq war is the defining issue for Jenna's father, the president, and anyone who talks of the president has the war first in mind. But, Jenna is a kid barely out of her teens and is just trying to talk about her pending marriage and helping kids. Most of this story had nothing to do with Iraq but was about a young girl that has nothing to do with making Iraq policy.

Yet during this happy talk press conference, these cretins throw out policy questions? For what purpose? What could Jenna have to say that could possibly matter on policy issues?

This whole article goes toward the debate about the kids of presidents. Are they to be held accountable for their father's actions? Are the president's kids fair game for an adversarial press corps? If so, if it is perfectly reasonable to ask Jenna Bush about her father's defining issue, then WHY during the 1990's did we not see headlines like "Chelsea ducks questions about stained blue dress, talks of college?" Why did we not see any 1979 headlines that screamed "Amy ducks questions of Iranian hostage crisis, talks of Sunday school?"

But, we'd never see an MSM that attacks the children of Democrats like this, would we?

The only thing that describes this wholly inappropriate questioning of Jenna Bush by the ignorati of the MSM is their infection with Bush Derangement Syndrome.

AP, you should be ashamed of yourself for badgering this young lady.