Fox News host Bill O'Reilly and guest Laura Ingraham on Sept. 23 highlighted the left's latest line of attack on Tea Parties: that they're crazy. Ingraham characterized the attacks as an attempt to distract from the liberal record and said the critique "doesn't work."

"As you may know, the Tea Party was racist for about six months as the far left tried to demonize the movement," O'Reilly said when introducing the broadcast's "Top Story" segment. "But now things have changed; the Tea Party is simply ‘crazy.'"

He showed clips from a report by the MRC's Culture and Media Institute illustrating liberal commentators and journalists attaching the "crazy" label to Tea Parties and Tea Party candidates like Christine O'Donnell, Sharron Angle and others.

Ingraham suggested "the critique doesn't work" because more Americans are in line with the Tea Party's views than with the liberal establishment.

CBS, NBC Commiserate with Pop Star Over Ban on Gays in Military

Derek Fenton, the man who burned pages of the Koran while protesting the planned Ground Zero Mosque in New York City, lost his job at NJTransit because of his demonstration. The network news outlets couldn't care less. None of the networks - ABC, CBS, NBC - have mentioned Fenton's name, according to a review of show transcripts.

Maybe they spent all their free speech-debate interest back in 2006 when they hurried to defend a Colorado teacher who was suspending after he compared President Bush to Adolf Hitler.

Jay Bennish made headlines in March 2006 after one of his students released a tape of Bennish comparing Bush to Hitler and declaring that America was the world's most violent nation. Bennish was suspended - placed on paid leave - while officials reviewed his conduct. (He was eventually reinstated.)

All three networks defended him by characterizing his comments as free speech.

Woody Allen: Religions Are ‘Delusions to Keep Us Going’

In an interview published Sept. 15 to promote his upcoming movie, "You Will Meet a Tall Dark Stranger," Allen told The New York Times, "This sounds so bleak when I say it, but we need some delusions to keep us going. And the people who successfully delude themselves seem happier than the people who can't."

"To me, there's no real difference between a fortune teller or a fortune cookie and any of the organized religions," Allen told reporter David Itzkoff. "They're all equally valid or invalid, really. And equally helpful."

When asked whether he thought reincarnation was more plausible than the existence of God, Allen said, "Neither seems plausible to me. I have a grim, scientific assessment of it. I just feel, what you see is what you get."

Woody Allen: Religions Are 'Delusions to Keep Us Going'

Maher: 'I'm Against a Church Anywhere'

Comedian Bill Maher took his anti-religion, anti-conservative views off HBO and into the mainstream Sept. 13 during an appearance on NBC's "Tonight Show." Maher told host Jay Leno he's against the Ground Zero Mosque, because he's "against a mosque anywhere. I'm against a church anywhere, or a Hindu temple or a synagogue."

Maher declared that houses of worship are "places that people go to retell nonsense stories from a time before men understood what a germ or an atom was, or where the sun went at night. They try to telepathically communicate with their imaginary friend. These are places that fleece people, and scare people and they perpetuate mass delusion. We shouldn't build any of them."

But Maher conceded that because the First Amendment protects freedom of religion, "they should be able to build them anywhere."

He also attacked conservatives and Sarah Palin, calling her an "evil dingbat."

Vanity Fair writer Michael Joseph Gross has already admitted to one error in his profile of Sarah Palin, but the contradictions and controversies surrounding his hit piece continue to stack up.

In a Sept. 7 post on The Corner, Katrina Trinko "refudiated" Gross's characterization of Palin as vicious, vengeful, and fake. Unlike Gross's sources, almost all of which were anonymous, Trinko provided citations.

Gross had cited "people who know" suggesting Palin's relationship with close friends Kristan Cole and Kris Perry had "deteriorated." But Cole reportedly told Trinko the charge was "absolutely not true. I don't know where they get this stuff from, honestly."

A former Palin aide, Ivy Frye, also contradicted Gross's characterization that she parted ways with Palin "on bad terms." "I didn't leave on ‘bad terms,'" she said in a statement. "Gross' 8 page hit piece is a complete work of fiction from beginning to end."

The Heavy-Handed Message of 'Machete'

By Nathan Burchfiel | September 3, 2010 12:00 AM EDT
Illegal immigrants depicted as the victims of laws that 'don't offer justice.'

Vanity Fair's Palin Antagonist: 'I Have a Lot in Common with this Woman'

The author of a 10,600-word Vanity Fair hit piece on Sarah Palin is defending his work, claiming he set out to defend the former Alaska governor and vice presidential candidate, but that the resulting article "was forced on me by the facts."

Michael Gross appeared on MSNBC's "Morning Joe" Sept. 2 to discuss his article in the October issue of Vanity Fair. The piece depicts Palin as a volatile, vengeful, mean-spirited figure, although Gross only managed to find one person willing to speak critically of Palin on the record.

"The worst stuff isn't even in there," Gross said on "Morning Joe" when asked about the extreme picture he paints of Palin. "You know, I couldn't believe these stories either when I first heard them and I started the story with the prejudice in her favor. I have a lot in common with this woman. I'm a small town person, I'm a Christian. I think that a lot of her criticisms of the media actually have something to them and I figured she'd gotten a bum ride but everybody close to her tells the same story."

Yet for someone so supposedly enamored with Palin, Gross sure turned quickly. He said Palin is "a person for whom there is no topic too small to lie about," citing a speech in Wichita in which Palin contradicted other statements she'd made about finding out her son, Trig, would have special needs.

Vanity Fair Palin Antagonist: 'I Have a Lot in Common With This Woman'

A 10,600-word article in the October issue of Vanity Fair reads like the rambling diaries of a spurned middle school student. Writer Michael Joseph Gross ran through a list of ill-sourced, hearsay attacks on Palin designed to depict her as a raging psychopath - a far cry from the down-to-earth "hockey mom" she portrays in public.

But in more than 10,600 words, Gross managed to cite just one person to criticize Palin on the record. Colleen Cottle, who served on the Wasilla City Council when Palin was mayor, complained that she "had no attention span" and "does not understand math or accounting." Heavy-hitting stuff, that.

None of the others Gross apparently interviewed were named, he said, "because they are loyal and want to protect her (a small and shrinking number), or because they expect her prominence to grow and intend to keep their options open, or because they fear she will exact revenge, as she has been known to do." 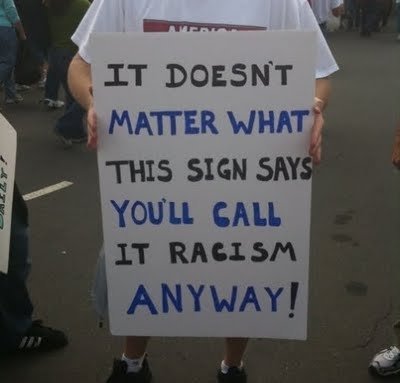 If you thought media coverage of the Aug. 28 "Restoring Honor" rally hosted in Washington D.C. by Fox News host Glenn Beck seemed like just another attack on conservatives, you're not alone. As noted by the Daily Caller's Jim Treacher, much of the coverage had a common thread: describing the crowd as "overwhelmingly white."

While the term was certainly used in coverage of Beck's rally, it's not a new label. "Overwhelmingly white" is a prime example of the media's groupthink on Beck, Tea Parties, and the conservative movement in general. Virtually every major "mainstream" media outlet has used the phrase in just the past year to describe conservative events.

But even as the media criticize Tea Party and other conservative rallies for an apparent lack of diversity, they struggle to bring minority voices into their own operations.

All three broadcast networks have described the Tea Parties as "overwhelmingly white." So have CNN, MSNBC, NPR, the Agence France Presse, The Washington Post, The New York Times, the Los Angeles Times, USA Today, National Journal and US News & World Report. Many of those organizations are the very ones the news industry discusses as having failed to make diversity goals for staff.

New York City Mayor Michael Bloomberg might consider checking out the polls. He's under the impression 100 percent of 9/11 families support building the Ground Zero Mosque at the current planned location.

"The family members, they do care," Bloomberg told "The Daily Show" host Jon Stewart Aug. 26. "And the family members that I've talked to - and I'm chairman of the board of the World Trade Center Memorial - 100 percent in favor of saying, ‘These people, if they want to build a mosque, can build a mosque. The lives of our loved ones were taken because the right to build a mosque or say what you want to say was so threatening to people.'"

Even Stewart, who takes Bloomberg's side in supporting the mosque and has mocked opponents in several episodes of the hit comedy news program, couldn't let Bloomberg's exaggeration go unchecked.