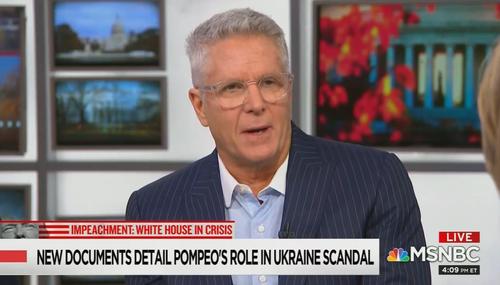 Ryan Foley
November 28th, 2019 6:55 AM
Appearing on Monday’s Deadline: White House, frequent MSNBC guest Donny Deutsch used a conversation about possible wrongdoing by Secretary of State Mike Pompeo as an excuse to perform a monologue addressing “the cancer of Donald Trump,” specifically how “everybody he will touch history will frown upon.” Throughout the segment, host Nicolle Wallace insinuated that… 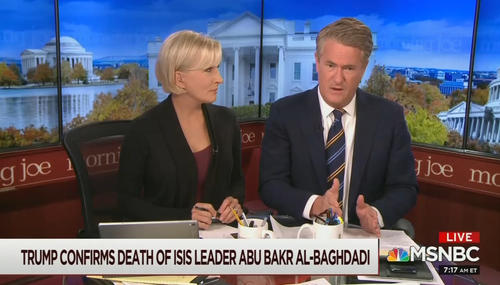 Geoffrey Dickens
November 4th, 2019 9:58 AM
The liberal media will NEVER let Donald Trump have a win. The elimination of ISIS founder Abu Bakr al-Baghdadi should have been cause for celebration for every American, but liberal journalists discovered reasons to whine about it. This past month also saw lefty hosts mourn the loss of Democratic “rising star” Katie Hill. The following are some of the worst takes from… 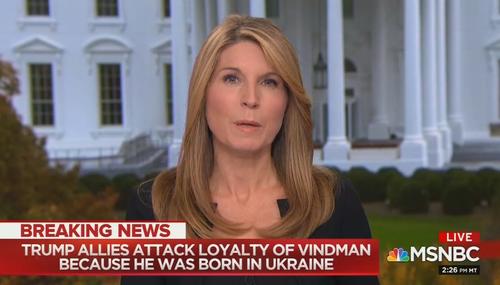 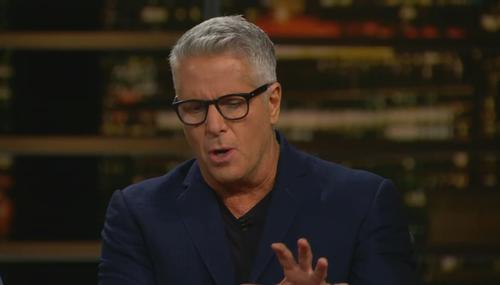 Ryan Foley
October 26th, 2019 6:08 PM
Appearing on Friday’s edition of Real Time, the always hyperbolic MSNBC talking head Donny Deutsch referred to Donald Trump as an “all-out dictator” and warned that “whatever the worst tyrants in history were capable of doing, he is capable of doing.” Host Bill Maher also subscribed to the “Trump is a dictator” narrative, arguing that he checked off more… 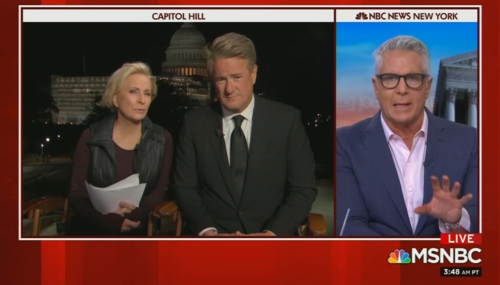 Kyle Drennen
October 24th, 2019 10:57 AM
Following a discussion of President Trump’s decision to withdraw U.S. troops from Syria, on Thursday, MSNBC’s Morning Joe went far beyond standard criticism of the controversial foreign policy move and wildly claimed it was proof that Trump was “owned by Putin” and heading up a “criminal organization” that had been “laundering money” for the Russian… 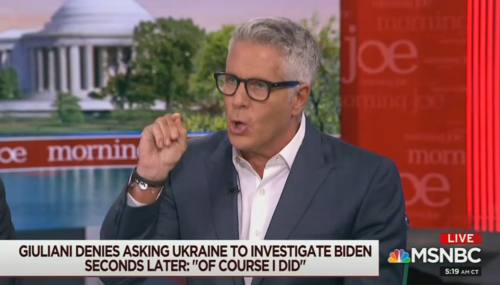 Donny Deutsch: ‘This is the Big One,’ Dems ‘Need to Storm the Gate’

Kyle Drennen
September 20th, 2019 4:35 PM
On MSNBC’s Morning Joe on Friday, left-wing regular Donny Deutsch was convinced that vague allegations of someone overhearing President Trump making controversial comments to another world leader during a private phone call would be the commander in chief’s downfall. Deutsch promised his fellow liberals that “this is the big one” and pleaded for Democrats to “storm… 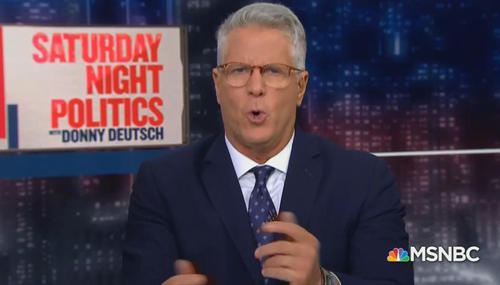 Curtis Houck
August 29th, 2019 4:54 PM
TV Newswer’s A.J. Katz reported Thursday afternoon that MSNBC has pulled the plug on Trump Derangement Syndrome sufferer Donny Deutsch’s Saturday Night Politics, a taped show that aired only 13 times at 8:00 p.m. Eastern. And according to Katz, this was the fifth Deustch-hosted show to be cancelled following previous attempts with CNBC, CNN, MSNBC, and USA (which was a scripted show… 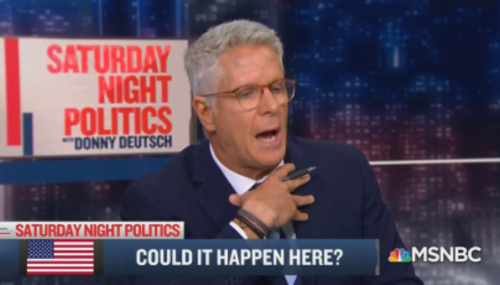 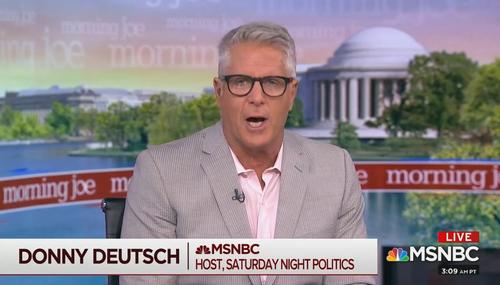 Donny Deutsch: There's a ‘Parallel’ Between Trump and Mussolini

Gregory Price
August 2nd, 2019 4:28 PM
Every single day, MSNBC pundit Donny Deutsch proves why he is in the running for the most Trump-deranged journalist in the liberal media. He has suggested that Trump is a “Christian fascist,” that Trump supporters want to engage in a “political ethnic cleansing,” that Trump could bring about a second Holocaust, and that Democrats are "at war" with Republican… 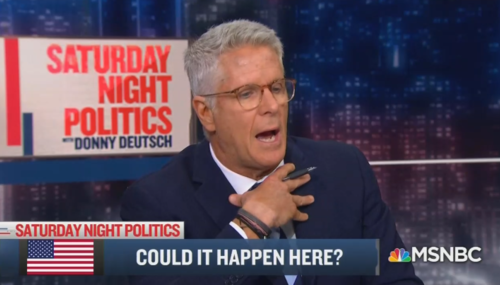 MSNBC: ‘Christian Fascist’ Trump ‘Wants to Be President for Life'

Nicholas Fondacaro
July 28th, 2019 4:17 PM
In a segment dubbed “could it happen here”, Deutsch again played around with the idea that Trump was constructing Nazi Germany in our own backyards. “During last week's show two days after Trump's harrowing North Carolina rally, lowlighted by racial chants of ‘send her back’, we posed the question: Could it happen here? It’s nine days later and we'… 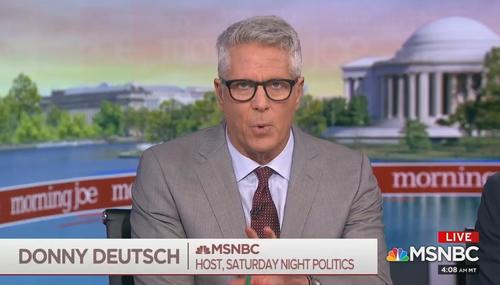 Deutsch: We're at War With Republican ‘Liars, Cheaters, and Stealers'

Gregory Price
July 26th, 2019 3:08 PM
If there was an award for most unhinged journalist of the Trump era, it would undoubtedly go to Donny Deutsch. The MSNBC contributor and host of poorly-rated Saturday Night Politics has embraced the politics of gaslighting in the Trump era like few other cable news pundits. 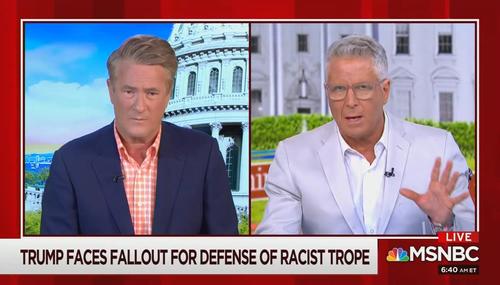 Gregory Price
July 19th, 2019 3:11 PM
If there was an award for most Trump-deranged pundit on cable television, Donny Deutsch would be the frontrunner. In the wake of the President’s attacks on the so-called “squad” and the “send her back” chants at Trump’s rally in Greenville, North Carolina in reference to Congresswoman Ilhan Omar, Deutsch has completely melted down, decrying on… 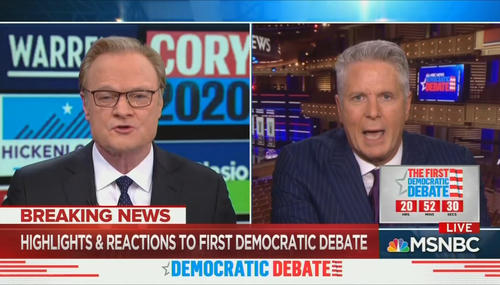 Curtis Houck
June 27th, 2019 1:15 AM
During MSNBC’s post-debate coverage on Wednesday, Saturday Night Politics host Donny Deutsch found himself in rhetorical cage match to the death against Last Word host Lawrence O’Donnell after Deutsch opined that Democrat Elizabeth Warren would lose in a landslide to President Trump and that no candidate on night one could currently beat the President. 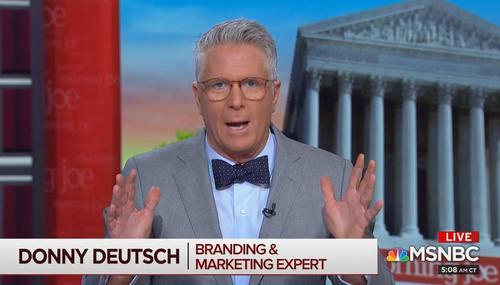 Gregory Price
May 24th, 2019 2:42 PM
You have heard it time and time again from the left: “Republicans have thrown away their principles to worship Trump.” The truth is that politician worship has a home on each side of the political aisle, and there is no group of people who worship Democratic politicians more than the “firefighters of the truth” in the mainstream media.