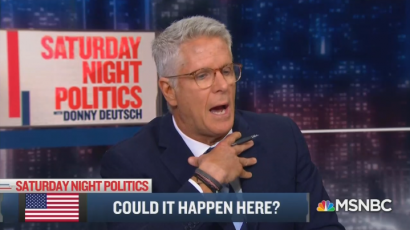 MSNBC’s anchors from Joe Scarborough to Donny Deutsch are constantly comparing President Donald Trump to Adolf Hitler. It doesn’t matter the topic. It could be Trump’s criticism of “The Squad,” or border security, or just because it’s a Tuesday. Regardless, they will find a way to say Donald Trump is LITERALLY Hitler.

From morning (MSNBC’s Morning Joe) to afternoon (MSNBC’s Deadline: White House) to evening (MSNBC’s Saturday Night Politics) there isn’t a time of day where you can’t find a MSNBCer who has compared the President to history’s worst monster.

The following is just month-long sample of MSNBC hosts comparing Trump to Hitler:

Donny Deutsch: “I’m Not Saying Trump is Going to Slaughter 6 Million Jews But...”

“There’s so many stunning parallels to what Hitler was doing in the early ’30s. Once again, I’m not saying Trump is going to slaughter 6 million Jews, but ranging from the fake news parallels to the seizing of new powers, the Reichstag [fire] of ’33 versus Trump’s nonexistent national emergencies and declarations to ignore Congress, the racial scapegoating, the rallies, the isolating of himself, the creating of false ‘other.’ He has the Justice Department in his pocket. He has one branch of the government marching blindly behind him.”
— Host Donny Deutsch on MSNBC’s Saturday Night Politics, July 27.

Headed for a Holocaust: Are “Jews Next?”

“We are heading to such a dangerous place. And guess what? You look at history, it can happen here. Maybe it’s the Jews next. Oh, oh, oh: I forgot, his daughter is married to a Jew. Who says? Who says? You know, I come from a place, I come from a group of people where it happened to, six million of them.”
— MSNBC analyst Donny Deutsch on MSNBC’s Deadline: White House, July 17.

MSNBC host Joy Reid: “He is an autocrat. In his mind, he wants to be president for life.”
MSNBC host Donny Deutsch: “I want to start using the word fascist.”
Reid: “Yeah, he’s a fascist.”
Deutsch: “And tendencies, many tendencies like Adolf Hitler. I said it. Throw me off the air.”
Reid: “At minimum what Donald Trump has done, at the most generous, he’s taken the Republican Party of the United States and turned them into the National Party of South Africa from 1948 until 1990. Because that party was a purely Christian fascist. They called themselves Christian nationalists.”
— MSNBC’s Saturday Night Politics, July 27.

“I want people to go back and look at Nazi Germany in the early ‘30s because the parallels are stunning....Oh, it can’t happen here, it can’t happen here. It can happen here....If you’re the person who votes for Donald Trump, you are no different than if you were watching on a subway five white nationalists berate an African-American woman saying, ‘Go back to where you came from,’ and then you hid and you put your head down....This is a man [Donald Trump] with Nazi tendencies.”
— Former advertising executive and current MSNBC analyst Donny Deutsch on MSNBC’s Morning Joe, July 19.

“I want people to be very frightened. Because if Donald Trump wins again, our democracy is really in play....If you look at what dictators do throughout history, they come in, create an other, and he did that, he does that every day and did that in stunning fashion yesterday, they get enough rich people to look the other way, they discredit the press....When you look at what he did yesterday as racist, if you look the other way, you’re no better than the guy on a subway, in a white nationalist was screaming at a person of color and say go back to your country, if you put your head down and didn’t say anything, that’s what voting for Donald Trump is like now.”
— MSNBC analyst Donny Deutsch on CBS’ Late Show with Stephen Colbert, July 16.

“Let’s talk instead about examples of countries across the world right now that do this sort of thing....over the past 10, 15 years where you actually have leaders pointing out a minority group to vilify, to humiliate, to suggest that the country needs to be ethnically cleansed and they need to be driven out of the country. What are some current examples of that?”
— Host Joe Scarborough’s question to Council on Foreign Relations President Richard Haas as aired on MSNBC’s Morning Joe, July 18.

“Donald Trump talking about what a disgrace to our system....I have to think back to that Financial Times article yesterday talking about how the Nazis in the early 1930s would rail against quote, ‘the system,’ constantly railing quote ‘against the system’ because the, quote ‘system’ was actually still stopping them in the early 1930s from doing what they wanted to do. So they attacked, quote ‘the system’ just generally until finally they were able to break it down and do whatever they wanted.”
— Host Joe Scarborough on MSNBC’s Morning Joe, July 24.

“Time to Sound the Alarm” of Trump’s Nazi Threat

If He’s Not Hitler, Donald Trump is Definitely David Duke...

“Nine out of ten Republicans approve of Donald Trump’s performance as President of the United States, a performance that has included one racist screed after another. So this is not just about Donald Trump. This is not just about elected leaders in Washington, D.C. This is about a political party now that has embraced the racial ideology of David Duke. Good luck with that in the years to come. Because you are going to be left on the dust bin of political history, Republicans.”
— Host Joe Scarborough on MSNBC’s Morning Joe, July 15.

“American blasphemy....Not since Woodrow Wilson showed Birth of a Nation in the White House has an American President been so flagrant in his racial messaging as this one. Today, President Trump amplified his language on race from a dog whistle to a bugle call, driving home his inflammatory and racist attacks on four Democratic congresswomen of color.”
— Host Chris Matthews on MSNBC’s Hardball with Chris Matthews, July 15.

...Or Archie Bunker Without a Heart

AM Joy host Joy Reid: “Donald Trump is your, you know, racist Uncle Jerry that’s sitting around screaming about Japan and China ruining America and Mexicans being, you know, moving into the neighborhood and making it dirty and trashy. That’s who he is and so he can live in a gold palace all he wants. He’s them.”...
Host Nicolle Wallace: “This Archie Bunker parallel has been drawn although I think Archie Bunker was a lot warmer.
Reid: “He had a heart.”
— MSNBC’s Deadline: White House, July 5.

Trump Will “Hurt” “Brown People” For His Base’s Entertainment

“[Donald Trump] shares his base’s resentment that the culture won’t come to them, that the culture won’t cater to them, that the movies aren’t about them, that they’re not the heroes in the American story. They want to be the center of attention again and Donald Trump says, you know what, I’ll make you the center of attention. You’re the center of my attention and I don’t give a damn about the brown people and I will hurt them for you. I will let you watch them get hurt. I will do a Roman colosseum for you and put little brown kids and abuelas in it so that you can see.”
— MSNBC’s AM Joy host Joy Reid on MSNBC’s Deadline: White House, July 5.