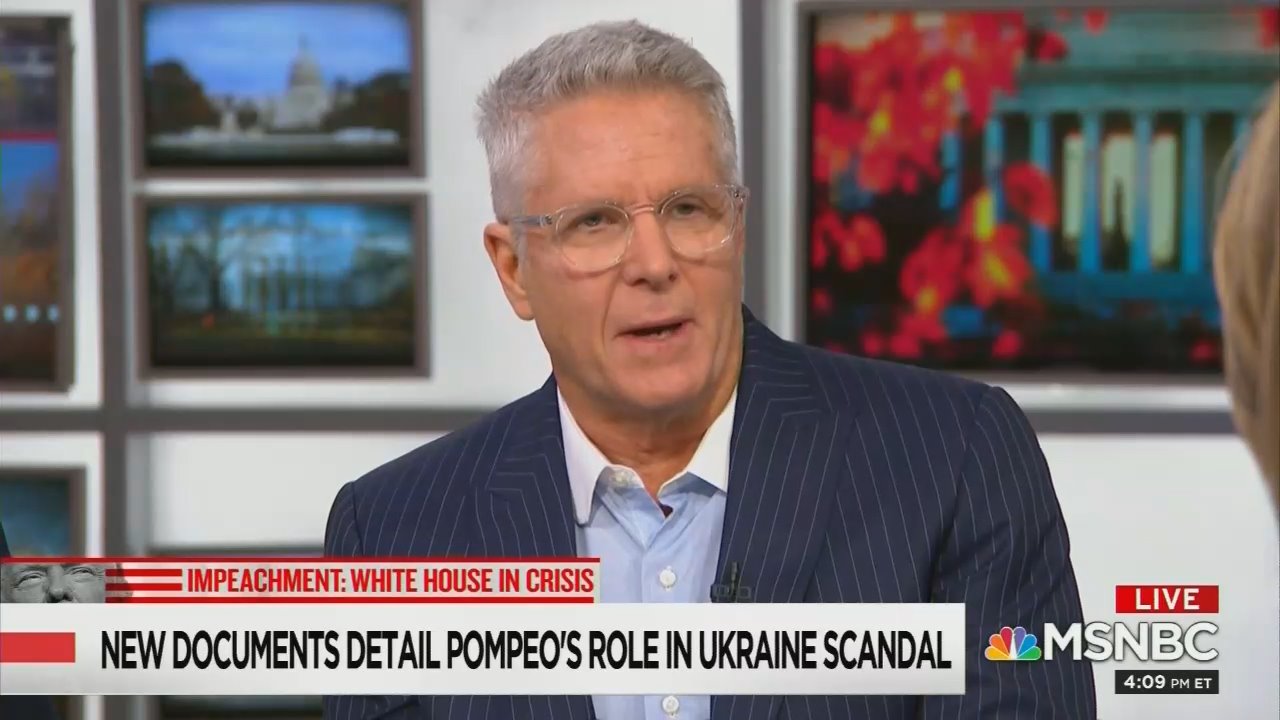 Appearing on Monday afternoon’s Deadline: White House, frequent MSNBC guest Donny Deutsch used a conversation about possible wrongdoing by Secretary of State Mike Pompeo as an excuse to perform a monologue addressing “the cancer of Donald Trump,” specifically how “everybody he will touch, history will frown upon.” Throughout the segment, host Nicolle Wallace insinuated that Pompeo would soon end up in jail because of his involvement in the Ukraine scandal.

It’s amazing how liberals can always predict “History” is going to end up pleasing liberals. Perhaps because almost all the historians are liberals. But liberals would have predicted “History” would show the Soviet Union would outlast America in the Cold War.

Wallace teed up Deutsch’s rant by proclaiming “the question is never whether the men and women who go to work for Donald Trump will be embroiled in… potential criminality and certain scandal, it’s how they navigate it.” The MSNBC host held up former White House Counsel Don McGahn as an example of someone who navigated “potential criminality and certain scandal” honorably while arguing that “Mike Pompeo seems to be failing all of the standards that McGahn met.”

This cued Donny to unload his grievances against President Trump as if he was in a therapy session. “The big mystery, for me, with all of these men, women, mostly men...what do they not get?” Deutsch proceeded to trash the members of Trump’s inner circle: “I don’t understand the human behavior, the soulless behavior...the wimp behavior of just being so submissive. I don’t know...what the spell Trump has over (them).”

Apparently running out of original ideas, Deutsch invoked the phrase “cult leader” to describe the President before trashing “these buffoons...we saw the last two weeks on display,” referring to congressional Republicans. After arguing that President Trump caused Rudy Giuliani to morph from a “respected politician” to a “joke,” Deutsch asked “what is it about this man? It’s got to be one of the great psychological studies of all time that forces men to find their lowest, lowest core.”

Following the conclusion of Deutsch’s rant, Wallace reverted back to psychoanalyzing Pompeo and comparing him to Don McGahn by claiming “Pompeo isn’t the first person to sort of have to look in the mirror and say “how far will I go?” Don McGahn looked in the mirror and…the line he wouldn’t cross was firing Mueller.” Wallace contended that for Pompeo, “the line should be… I won’t go to jail for Donald Trump.”

Wallace mentioned that “three guys” associated with Trump are either behind bars or will be very soon. She seemed to think Pompeo might join them. “He’s been there long enough that if you do Donald Trump’s bidding, you will end up in jail and I just can’t believe Mike Pompeo can’t land himself on that right side of that line.” At least no one on her panel fantasized about Pompeo getting stabbed or hit by a car.

A transcript of the relevant portion of Monday’s edition of Deadline: White House is below. Click “expand” to read more.

NICOLLE WALLACE: The question is never whether the men and women who go to work for Donald Trump will be embroiled in…in potential criminality and certain scandal, it’s how they navigate it. And if Don McGahn is the model, so he spent 30 hours with Robert Mueller, told him everything he wanted to know, cooperated with that investigation, became the star witness of the obstruction report but he’s somehow reluctant enough to cooperate with Congress that he’s able to…to sort of keep some of his membership cards in the GOP for whatever reason he’d want them. Mike Pompeo seems to be failing all of the standards that McGahn met. He doesn’t look like he’s willing to cooperate with anything and he’s failing the leadership test. I mean, I think the…the Friedman op-ed last week calling him sort of a West Point graduate leaving soldiers…his soldiers on the battlefield was devastating. If you want to run for dogcatcher, you can’t be that guy. You can’t be a guy who’s so weak, you leave your soldiers on the battlefield.

DONNY DEUTSCH: It’s stunning; the cancer of Donald Trump. How everything he touches and I…I wish we would…could fast forward five years and in addition to all the President’s men here, the Mulvaneys of the world, the Michael Cohens of the world who did not navigate as well, I saw him in jail a couple weeks ago, the…the Devin Nuneses of the world, that everybody he will touch, history will frown upon. And I still…the, the big mystery for me with all of these men, women, mostly men, what…what do they not get? I…I, I don’t understand the human behavior, the soulless behavior, the…the wimp behavior of just being so submissive. I don’t know what the…what the spell Trump has over…obviously, we talk a lot about a cult leader but whether it is these buffoons we saw last week, the last two weeks on display, or as we start to see behind the scenes, or we…we saw Giuliani morph from a respected politician to a buffoon, to a joke. What is it about this man? It’s got to be one of the great psychological studies of all time that forces men to find their lowest, lowest core.

BASIL SMIKLE: Well, I don’t know how respected Giuliani was in some circles.

SMIKLE: But that said.

SMIKLE: No, I know…I know you are. But what’s interesting to me and I’ll…I’ll stay with this Giuliani piece for a second. If you…if you’ve worked near an executive government, Governor, Mayor, President, there are always individuals who are sort of extra-governmental. Right? There are always folks who will exist sort of outside of the bureaucracy, outside of governmental sort of responsibility; that do things on…on behalf of that executive but I have never seen, to your point earlier, someone who’s effective, so pervasive throughout government that they’re engaging so many different facets to the point where you have a President saying he’s going to withhold congressionally approved funding to serve his own political needs. If that were a Democrat, if that were Barack Obama, impeachment wouldn’t even have to go through a hearing. He would have been pushed out of office a long time ago but the fact that we are here is what is so…it’s so disturbing. I have people on the street, voters who don’t believe that Donald Trump will be convicted in the Senate but are now asking for Giuliani’s arrest and imprisonment. It’s, so it’s, it’s…

DEUTSCH: Can I ask you a question? Because you always ask the questions. Because you’ve been around power, closer than anybody at the highest level. If you were going to break it down and…and give a why. Why people follow this guy so blindly when it’s so obvious to us in the movie theater watching that the lemming’s going off a cliff. You worked for a President, you’ve been…

DEUTSCH: …around power your whole life.

WALLACE: And the fact…and I go back to McGahn because Pompeo isn’t the first person to sort of have to look in the mirror and say “how far will I go?” Don McGahn looked in the mirror and…and the…the line he wouldn’t cross was firing Mueller. And if you read, and I maybe have read it too many times, but if you read that second volume of obstruction, it’s about the lines Don McGahn wouldn’t cross and the notes Annie Donaldson took documenting it. The fact that…that these guys didn’t either read it and learn any of those certain lessons. The…the line should be the line that Michael Cohen should do, I won’t go to jail for Donald Trump. Because there are now, what, three guys going to jail? Roger Stone, Michael Cohen and Paul Manafort. The…it’s…it’s out there already. He’s been there long enough that if you do Donald Trump’s bidding, you will end up in jail and I just can’t believe Mike Pompeo can’t land himself on that right side of that line.