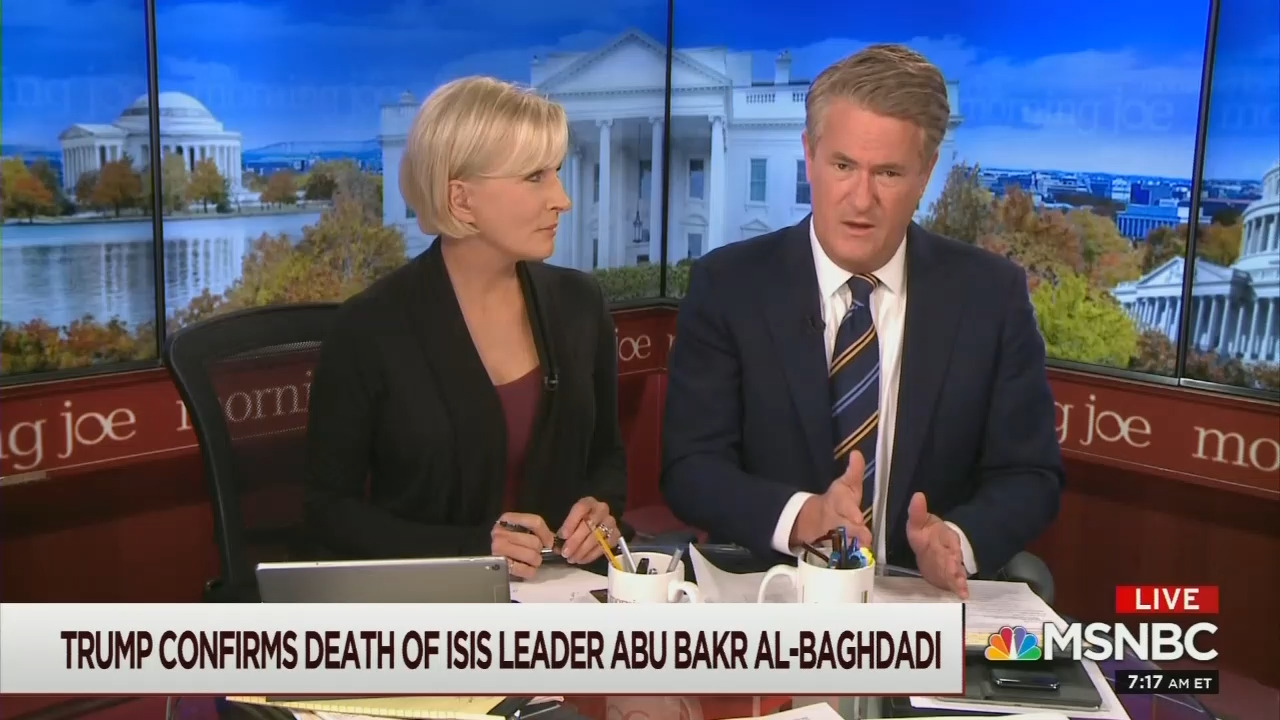 The liberal media will NEVER let Donald Trump have a win.

The elimination of ISIS founder Abu Bakr al-Baghdadi should have been cause for celebration for every American, but liberal journalists discovered reasons to whine about it.

This past month also saw lefty hosts mourn the loss of Democratic “rising star” Katie Hill and fret that Elizabeth Warren would struggle in a potential 2016 showdown with Trump because his “dumbing down of a general election” would “deprive” her of her “greatest strength.”

The following are some of the worst takes from liberal hosts and reporters over the past month:

“The President of the United States went on talking about how [ISIS founder] Baghdadi died like a ‘dog, a coward, a whimpering, whimpering and sniveling.’ He sounded not like a President of the United States. He actually sounded like Saddam Hussein after torturing people, sounded like Muammar Gaddafi after he would torture people...It was deeply un-American, deeply troubling.”
— Host Joe Scarborough on MSNBC’s Morning Joe, October 28.

“This John Wayne bravado reflects a deep insecurity in Donald Trump. That insecurity was evidenced in his comparison of the murder of Baghdadi with Obama’s and Osama Bin Laden. All of this has something to do with....what he thinks being a man means....What we heard yesterday, with ‘he died like a dog, he was whimpering,’ was Donald Trump kind of performing his hypermasculinity. Right? He’s the man....‘I’m John Wayne with my six-shooters.’”
— MSNBC contributor and Princeton professor Eddie Glaude on MSNBC’s Morning Joe, October 28.

Death of an “Austere Religious Scholar”

Can’t Ever Let Trump Have a Win

Co-host Whoopi Goldberg: “So can we at least agree that the world is a better place without this guy in it?”
Co-host Joy Behar: “Who, Trump or Baghdadi? Which one?...He [Trump] has a chaotic foreign policy. Everything is tainted because of what he did to the Kurds, too....So it’s tainted....We don’t trust him. We don’t trust that he’s a real American.”
— ABC’s The View, October 28.

“This is somebody who is absolutely a rising star, who swung a purple district, who has been very comfortable about identifying as bisexual. So, an extraordinary person; really has a bright future ahead of her. This is something that was certainly unexpected that for someone who has followed her for months, it certainly seems out of character.”
— Correspondent Kyung Lah discussing Democratic Congresswoman Katie Hill being investigated by House Ethics Committee for her alleged involvement with a staffer as aired on CNN Newsroom with Brooke Baldwin, October 24.

Daily Beast columnist Margaret Carlson: “She was a rising star. There’s no doubt she was one of the named ones that we know about.”
Host Andrea Mitchell: “For the big blue wave.”
Carlson: “Yes. And it’s a loss, but you know, I think there’s a double, double standard on the Hill, which is one is that women are treated more strictly than a man. And Democrats are following the strictures of the Ethics Committee and others on sexual misconduct more strongly than Republicans are....Our president gets away with so much more than Katie Hill....Nancy Pelosi is doing the right thing, but it’s still something of a tragedy.”
— MSNBC’s Andrea Mitchell Reports, October 28.

“The reality is that this appears to have successfully forced Katie Hill, a very promising young member of Congress, from office.... It really seems like the bad guys won here, to oversimplify.”
— Host Chris Hayes on MSNBC’s All In, October 28.

“Last night on AC360, there were several references to one of the congressional leaders of this ridiculous protest, and he’s a congressman from Alabama named Mo Brooks, but I kept hearing ‘Mel Brooks’...This whole spectacle yesterday seemed like something out of a Mel Brooks movie, this ridiculous....It’s a sign of desperation...They captured, a news cycle, but I don’t know what good that news cycle did them because they looked like such jerks.”
— CNN Legal Analyst Jeffrey Toobin on CNN’s New Day, October 24.

“We use the term authoritative tendencies. Let’s stop with that. He is an all-out dictator....I took a lot of heat on my show going through Nazi Germany in the ’30s and the parallels....I’ve known Donald Trump for 20 years. He’s a sociopath and whatever the worst tyrants in history were capable of doing, he is capable of doing. We all keep saying it can’t happen here, it can’t happen here. It is happening here! And people need to be frightened....You left out something in your dictator list, beyond creating an other, all of a sudden the Justice Department is not an individual branch, it serves not only at the pleasure of the president, but for and on behalf of the president. By the way, you and I could end up in jail really easily. We’re not that far from that. I’m a doom and gloom guy, but I really believe it’s this bad.”
— Former advertising executive/MSNBC host Donny Deutsch to Bill Maher on HBO’s Real Time with Bill Maher, October 25.

Did He Miss History Class When They Talked About Democratic Segregationists and Klan Members?

“I’m old enough to remember when we had a Supreme Court justice who referred to him being asked questions, Clarence Thomas, as the ‘high-tech lynching of an uppity black man.’ It’s always been fascinating to me that Republican parties and the far right in this country who were primarily responsible for massive domestic terrorism and lynching of black people in this country purely for the fact that we were trying to vote are always the first people to invoke that imagery when they are being held accountable for their behavior.”
— MSNBC contributor Jason Johnson on MSNBC’s Deadline: White House, October 22.

Why Are These Christian Singers So Uplifting? Don’t They Know Trump Is President?

“The America these [Christian music] artists love to evoke in their songs is stuck in what one columnist called a ‘hideous loop of hate.’ White supremacists march in public chanting, ‘Jews will not replace us.’ A man guns down Latino shoppers in an El Paso Wal-Mart. School shootings now seem almost as frequent as proms. The President demonizes immigrants and tweets racist insults. These issues aren’t just political, they’re moral. Yet little of these ugly realities make their way into CCM [Contemporary Christian Music], which is now dominated by upbeat praise and worship music.”
— CNN Enterprise writer/producer John Blake in October 15 CNN.com article.

“Senator Warren, you are probably the deepest of all of the Democratic candidates in terms of policy and specificity and I see people wait online hours and hours, four hours in New York to talk to you about them. Do you worry that in a general election you’ll end up running against someone like Donald Trump whose slogan and strategy amounts to – you know –  ‘You’re a poo-poo head. No, you’re a poo-poo head.’ Do you worry that the dumbing down of a general election against Donald Trump may deprive you of your greatest strength?”
— Host Nicolle Wallace during MSNBC’s post-debate coverage, October 16.

Trump Voters Follow Him Because “They Don’t Want Diversity”

“The Trump rallies are Trump’s, it’s his strong supporters. I mean, ‘lock her up!’...All the things he says, all the vicious, mean things he says, they love it....They’re good Americans otherwise....but they have this fixation. They want to return this country to the white Christian country that they believe it should be again. They don’t want the diversity, and they follow him for this.”
— Former ABC News correspondent Sam Donaldson on CNN’s Reliable Sources, October 13.

Being “Anti-Trump” Is Not Biased It’s “Pro-Truth”

“When I was in London, I was in the [Winston Churchill underground bunker] war rooms and I got into an argument with a Trump supporter....All he said to me is, ‘Why can’t you give him a chance the way we gave Obama a chance?’ Give him a chance? He’s destroying the planet. He’s destroying the democracy. He doesn’t know what he’s doing.”
— Co-host Joy Behar on ABC’s The View, October 17.