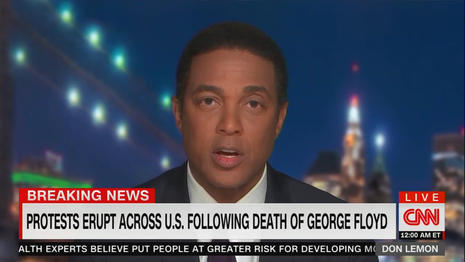 To hear the media spin it, the rioting and looting that took place around the country the last few weeks was a Boston Tea Party-like response to the years of Donald Trump and Republicans fanning the “flames” of “racial hatred.”

The following are the Top 15 worst outbursts by liberal hosts and reporters during their coverage of the George Floyd protests and subsequent riots:

“The President has incited and divided, has stoked this. His comments have been as outrageous as they are unacceptable. President of the United States fanning these flames, inciting racial hatreds. Just appalling conduct.”
— MSNBC contributor Steve Schmidt on MSNBC: A Country on the Brink, May 31.

“As President, Trump has lied or misled almost 20,000 times by The Washington Post’s count. And Republicans have repeated those lies. At first hesitantly but increasingly with a lightness of heart, marveling at the ease with which they can justify their acquiescence. If the United States does descent further down a dark path, much blame will lie with these Republican leaders, Donald Trump’s cheerful collaborators.”
— Host Fareed Zakaria on CNN’s Fareed Zakaria GPS, June 7.

13. Closest Trump Has Gotten to Establishing an American “Autocracy”

“How would you assess his call for troops, his treatment of the military? Was this the closest to autocracy that we’ve seen thus far in the Trump years?”
— Host Brian Stelter on CNN’s Reliable Sources, June 7.

“Heavy-handedness seems to be kind of the order of the day. I didn’t see any law enforcement really working to protect the protesters in exercising their constitutional First Amendment right to protest. That is also part of the responsibility of law enforcement, to uphold the Constitution….The idea that you could have a few people, who break a few windows and burn a few cars, and then militarize the whole nation’s law enforcement infrastructure, it just shows how very tenuous things are right now.”
— MSNBC anchor Joshua Johnson on NBC’s Meet the Press, May 31.

11. Time to Take the Keys Away From “Drunk Driver” Trump

“Everybody’s been so worried about Joe Biden, is he the right guy? I think he’s the perfect guy. He is comfort. We have a drunk driver; he’s the designated driver to get us home.”
— Former advertising executive/MSNBC host Donny Deutsch on MSNBC’s Morning Joe, June 8.

“The President seems to think that dominating black people, dominating peaceful protesters is law and order. It’s not. He calls them thugs. Who is the thug here? Hiding in a bunker? Hiding behind a suit? Who is the thug? People have waited for days for this wannabe wartime President to say something and this is what he says, and that is what he does. I’ve seen societies fall apart as a reporter. I’ve seen people dying in the streets while protesting. I’ve seen countries ripped apart by hate and misinformation and lies and political demagogues and racism. We can’t let that happen here.”
— Host Anderson Cooper discussing Trump bringing in the military to stop looters as aired on CNN’s AC360, June 1, 2020.

“This is all acting, all a show and he is performing what he thinks a leader should be like and what he thinks a President of the United States should be like. But guess what? This is a very, very dangerous game. He is possibly igniting tensions — not possibly. He’s igniting tensions.... This may help his base, but sensible Americans will realize, and they know America is not a dictatorship. America is not a police state.”
— Host Don Lemon discussing Trump bringing in the military to stop looters, as aired on CNN’s Erin Burnett Outfront, June 1.

Correspondent Jim Acosta: “We have now witnessed the President of the United States operating outside the bounds of U.S. law and the tradition of what we know to be our democracy, which is the United States government does not use the military against civilians in this country unless there is a damn good reason. This just wasn’t a damn good reason. All we ended up with was the President of the United States looking like a wannabe dictator so he could walk over to a church and pretend to be concerned about the church. It’s just a sad and unbelievable thing.”
Host Anderson Cooper: “It’s like in some small country that’s taken over by some low-level lieutenant — you know, low-level colonel who gets on the airwaves and declares himself the law and order President.”
— Discussion about President Donald Trump walking across the street from White House to a fire-damaged St. John’s Episcopal Church, as aired on CNN’s AC360, June 1.

7. Trump Intentionally “Inflaming Racial Division” to Rally His Racist Base

“This President, he knows exactly what he’s doing. He is inflaming racial division in this country because he thinks — not only does he think —  he knows it works for him in certain circles in his base.”
— Host Don Lemon on CNN’s The Situation Room, May 29.

6. “Wannabe Wartime President” Is “Dangerous” and “Destructive” to America

“Tonight, with flashbang grenades going off and tear gas in the air, the President of the United States, a wannabe wartime President had what he hoped was his MacArthur moment, his Patton promise, calling himself our law and order President. He said, he’ll send active duty military troops into American cities and states to dominate, his words, dominate demonstrators in the wake of the police killing of George Floyd a week ago. What happened in this past hour would be comical if it wasn’t so dangerous and so destructive.”
— Host Anderson Cooper discussing Trump bringing in the military to stop looters as aired on CNN’s AC360, June 1.

“Open your eyes, America. Open your eyes. We are teetering on a dictatorship. This is chaos. Has the President — I’m listening — is the President declaring war on Americans? What is happening here?”
— Host Don Lemon discussing Trump bringing in the military to stop looters, as aired on CNN’s Situation Room, June 1.

“Like December 7, 1941, Americans will remember the first day of June 2020 as the date of a sneak attack against their countrymen, but while that 78-year-old atrocity was perpetrated by a foreign government, this one came from within.”
— Newsweek White House correspondent Andrew Feinberg in June 3 Independent online article.

“Lincoln talked about the better angels of our nature. Who is the one who is in our country who is pulling the people together, pulling us together and making us a union?...We’ve been in a cold civil war for quite some time. Well, today, and this week it feels like it just got hot. This cold civil war has become a burning civil war. And I’m sad to say that there, it feels like this time the President is not on the side of the union.”
— CNN political analyst Keith Boykin during CNN live coverage at 1:40am EDT May 31.

Host John Berman: “Even if your goal is to stop the looting, even if your goal is to dampen some of the tensions we’ve seen, how is putting lives at risk in front of the White House – how does it help that end, Laura? There are people whose lives were endangered for that picture, you know, tear gas, rubber bullets, flash-bang grenades, you saw people getting hit.”...
CNN Legal Analyst Laura Coates: “The idea of being able to express oneself in front of the White House has been so iconic. It was converted instead to a version of Tiananmen Square.”
— Discussion about President Donald Trump walking across the street from White House to a fire-damaged St. John’s Episcopal Church as aired on CNN’s New Day, June 2.

1. Looting and Rioting Just Like The Boston Tea Party

“Let’s not forget, if anyone judging this, I’m not judging this. I’m just wondering what is going on because we were supposed to figure out this experiment a long time ago. Our country was started because — this is how — the Boston Tea Party. Rioting. So do not get it twisted and think this is something that has never happened before and this is so terrible and these savages and all of that. This is how this country was started.”
— Host Don Lemon describing scenes of looting on CNN Tonight, May 30.