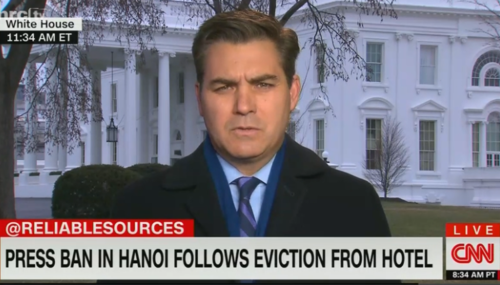 Acosta: White House Gets 'Confused Over Who the Supreme Leader Is'

Ryan Foley
March 5th, 2019 9:45 AM
One word perfectly sums up the tone of the conversation on Sunday’s edition of Reliable Sources: hyperbolic.  Throughout the hour, CNN White House Correspondent Jim Acosta effectively compared President Trump to Kim Jong-un while host Brian Stelter suggested to a New York Times White House correspondent that rather than covering a White House beat, she was covering a “criminal… 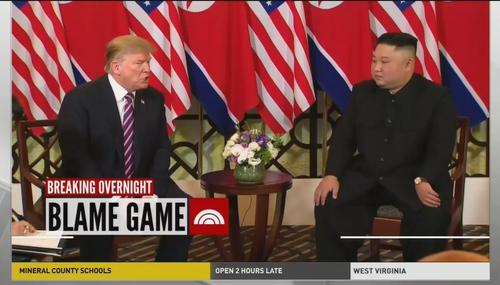 Jeffrey Lord
March 2nd, 2019 4:00 PM
Ahhhh memories. Here at CPAC this week, the stories abound about President Donald Trump walking away from the Hanoi Summit. Here are a few of the headlines. From the Los Angeles Times: “Art of the retreat: Summit failure further scuffs Trump's dealmaker claims.” From USA Today: “Donald Trump's big fail on North Korea: He didn't prepare and he got played.”… 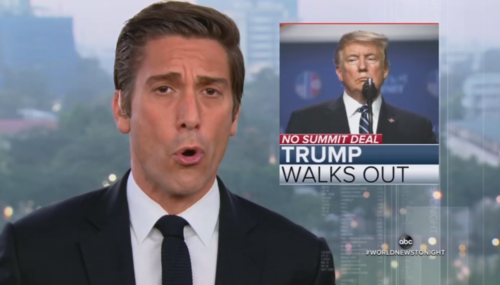 ABC Rips Trump for No Deal, Hypes NoKo 'Taking on the President'

Nicholas Fondacaro
February 28th, 2019 9:16 PM
With President Trump on his way back home after the failed denuclearization negotiations with North Korea, Thursday’s edition of ABC’s World News Tonight decided to take some swings at the President for not getting a deal. It was a head-scratching complaint since many in the liberal media spent the last few days clutching their pearls in fear of Trump giving away too much because of… 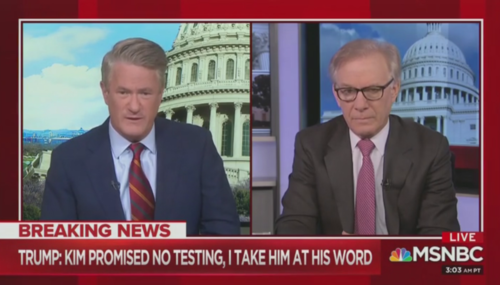 'Sometimes You Have to Walk' -- 'Morning Joe' Praises Trump on Summit

Mark Finkelstein
February 28th, 2019 8:55 AM
On Morning Joe, Joe Scarborough and David Ignatius praised President Trump's decision to walk away from the Hanoi summit with Kim Jong Un of North Korea. Scarborough calls it the "best of all circumstances."  Ignatius agreed, quoting Trump that "sometimes you just have to walk."  Also, Joyce Vance a former US Attorney appointed by President Obama says that in…

Curtis Houck
February 28th, 2019 4:19 AM
An hour after he trumpeted Thursday’s abrupt end of the second U.S.-North Korea summit, CNN chief White House correspondent Jim Acosta appeared in need of a safe space following President Trump’s Hanoi press conference. Acosta wasn’t called on, so he aired his grievances on CNN while falsely suggesting the President had “steered clear largely” of the White House… 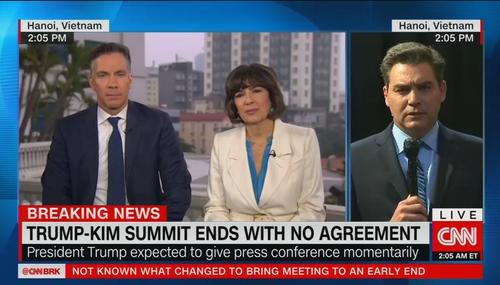 Curtis Houck
February 28th, 2019 2:57 AM
Early Thursday morning in the United States, CNN gloated about the abrupt end of the Hanoi, Vietnam summit between President Trump and North Korean dictator Kim Jong-un with a potpourri of liberal bloviating. Such hot takes ranged from taunting Trump as a failure on North Korea, not understanding that the presidency isn’t like The Apprentice, suggested the Michael Cohen hearing hurt talks,… 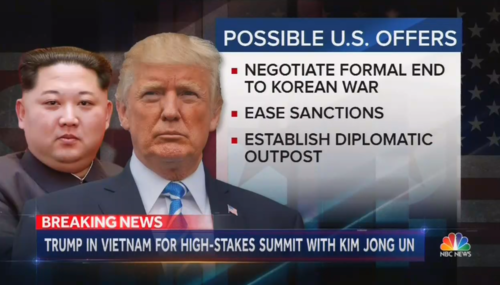 NBC Fearful Kim Will 'Flatter' Trump into 'Giving Up Too Much'

Nicholas Fondacaro
February 26th, 2019 9:11 PM
Broadcasting live from Hanoi, Vietnam for the second U.S./North Korea summit on denuclearization, NBC kicked off Tuesday’s Nightly News with a report giving a rundown of the current state of the negotiations after last year’s historic summit. But towards the end of that report, which was delivered by anchor Lester Holt, he shared concerns from “critics” who feared Kim Jong… 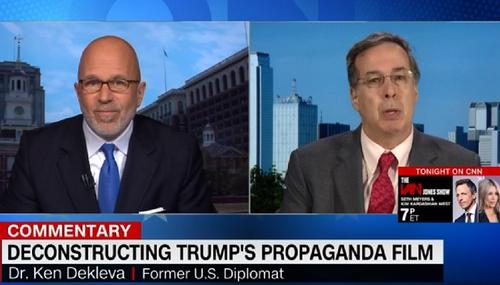 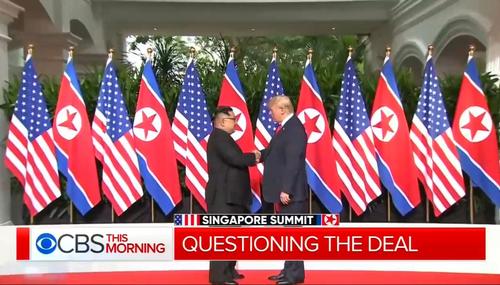 Jeffrey Lord
June 16th, 2018 4:00 PM
It would be hard to make this up. On two very different subjects, the liberal media has emerged from the last couple of weeks with not just egg on its face. In fact, it seems like they took an entire carton of Grade A Large and smashed them one by one over themselves. Can you say "cult"? 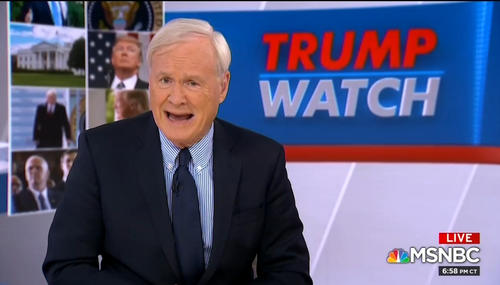 Curtis Houck
June 14th, 2018 1:08 AM
A day after MSNBC’s Hardball host Chris Matthews called out President Trump for “coming out like a kiss butt” in dealing with North Korea’s Kim Jong-un, the liberal pundit reveled on Wednesday in comparing Republicans to North Korean soldiers and comments by Tennessee Republican Senator Bob Corker that GOPers are part of a “cult” for enthusiastically backing… 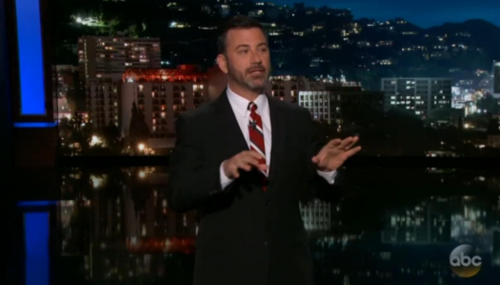 Randy Hall
June 13th, 2018 7:28 PM
During his opening monologue on Tuesday evening, ABC late-night comedian Jimmy Kimmel once again attacked Donald Trump, this time asserting that the Republican president “wanted to make it look like he did something big” in his summit with North Korean leader Kim Jong-un -- “whether he did something big or not.” The host of Jimmy Kimmel Live! tried to cast doubt on the… 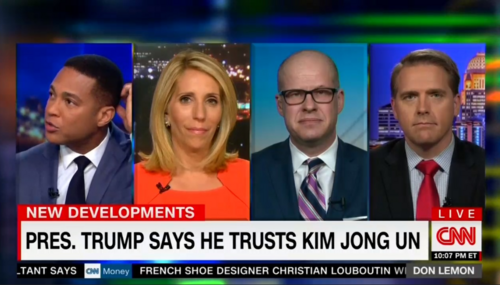 Boot: Trump Is an ‘Arsonist’ Putting Out His North Korea Fire

Nicholas Fondacaro
June 13th, 2018 12:57 AM
From almost the very beginning, President Trump played down expectations for the North Korea summit, even suggesting it may not even happen. But now that the President was walking away with a signed commitment, which he acknowledged might fall through, liberal news outlets were questioning why they even had the summit at all. On Tuesday’s edition on CNN Tonight, author Max Boot argued Trump… 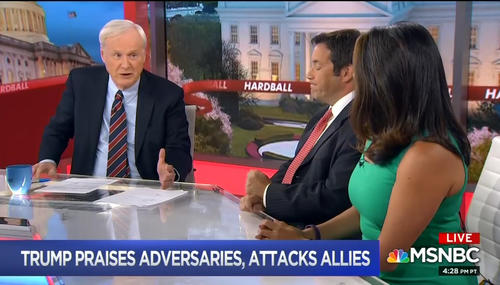 Irony Alert! Matthews Claims Trump Came Off ‘Like a Kiss Butt’ to Kim

Curtis Houck
June 12th, 2018 11:23 PM
If you weren’t sure whether a certain phrase in the headline was a word, it’s a no but MSNBC’s Hardball host Chris Matthews tried on Tuesday night to make it one. Describing President Trump’s attempts at currying favor with North Korean dictator Kim Jong-un, Matthews told one of his panels that Trump didn’t come off like someone skilled in “political… 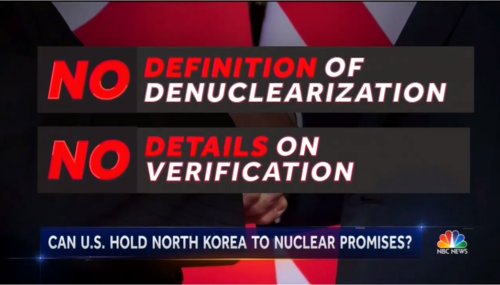 Nicholas Fondacaro
June 12th, 2018 9:39 PM
While broadcast networks ABC and CBS were skeptical about how the U.S.-North Korea agreement would turn out (a legitimate concern considering North Korea’s history of reneging on such deals), NBC Nightly News took a noticeably harsher tone and railed against President Trump. This decrying of Trump’s agreement comes after NBC has gone to bat time and time again for the radical…