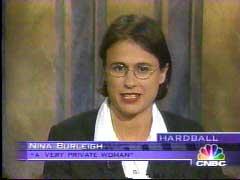 Remember former Time contributor Nina Burleigh? She won our Quote of the Year award in 1998 for proclaiming to the Washington Post: "I would be happy to give him [Clinton] a blow job just to thank him for keeping abortion legal. I think American women should be lining up with their presidential kneepads on to show their gratitude for keeping the theocracy off our backs." She also was a runner-up in a Hillary-worship category in 2000. (Screen shot is from an October 15, 1998 appearance on CNBC's Hardball when, as detailed by the MRC CyberAlert, Chris Matthews asked her why she had proclaimed she "would give the President the kind of sex that he got from Monica Lewinsky.")

Burleigh has written a piece for Salon.com (a liberal site, yes, but still viewing a corporate commercial is required) about how her son was molded into a little patriotic clone in small-town New York and how she learned that she, too, could love America, if only Bush wasn't ruining it with that vile war in Iraq:

The Harlem unit of the National Guard was putting on a Christmas clothing drive for Iraqi children. On the way into the city, I tried to explain to my son what we were doing, and -- as best I could -- why. As we crossed the George Washington Bridge and the Manhattan skyline spread out below us, I began to give him a variation on the "Africans don't have any food, finish your dinner" talk. I wanted him to understand how privileged he was to live in a place where bombs weren't raining from the sky. It was a talk I'd tried to have before, but not one he'd ever paid much attention to until that day, trapped in the back seat of our car.

In simple language, I told my son that our president had started a war with a country called Iraq. I said that we were bombing cities and destroying buildings. And I explained that families just like ours now had no money or food because their parents didn't have offices to go to anymore or bosses to pay them. "America did this?" my son asked, incredulous. "Yes, America," I answered. He paused, a long silent pause, then burst out: "But Mommy, I love America! I want to hug America!"

The school had to close for financial reasons, and Burleigh's family moved back to New York City:

The patriot-ization of our son was thorough enough to survive the summer. He decorated his birthday cookies with red, white and blue sugar, and in his summer camp program, when doing arts and crafts, those were the colors of paint he favored. "I made the stars red, white and blue -- like the flag!" he exclaimed, holding a paper mobile he'd strung together.

Now it has been almost a year since my son scampered down the steps of Narrowsburg Central Rural School for the last time. We've since returned to the city, driven back to urban life more by adult boredom than our children's lack of educational opportunities. Our son is enrolled in a well-rated K-5 public school on Manhattan's Upper West Side; not surprisingly, the Pledge of Allegiance is no longer part of his morning routine. Come to think of it, and I could be wrong, I've never seen a flag on the premises.

My husband and I realized, though, that Narrowsburg did more than mold our boy into a patriot. He can, it turns out -- despite the warnings of other city parents -- read at a level twice that of his new peers. Since we returned to the city, he has learned how to ride a bike, long for an Xbox, practiced a few new swear words and, somehow, learned the meaning of "sexy." He has pretty much stopped favoring red, white and blue.

How soon childish national pride is shed, I sometimes think now, and not a little wistfully. Only once it was gone did I realize that, after our initial discomfort, my husband and I had begun to see our son's patriotism as a badge of innocence. His faith was a reminder to us that the reason we are devastated by the war in Iraq and the Bush presidency is that we too love America. We too want to believe in its potential for good and brotherhood.

And don't miss the part where she tattles to the ACLU on the small-town school for its voluntary Bible study. Oh, what tasks Burleigh might perform for the ACLU for keeping the theocracy off our backs...