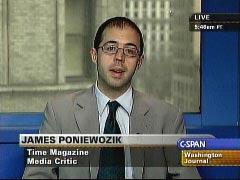 Time’s cover story on Don Imus this week is authored by TV writer James Poniewozik, and he appeared on C-SPAN’s Washington Journal on Friday morning to plug it. I haven’t seen the whole hour, but just caught the end, when a caller from Manteca, California said that while the Time writer had suggested Imus was for the white elites, he said it seemed to him like a show for liberal elites, so "I kind of feel it’s the left eating their own."

Poniewozik had an interesting response to the caller: "I don’t know if I would go so far as to call every journalist who regularly appeared on Imus liberal off hand, but I think he makes an excellent point. I mean, frankly, in a lot of the major media, there’s this knee-jerk immediately dismissive attitude toward Fox, that among a lot of the same people in the same circles that would go on Imus and shrug all the stuff that he did off. That general point, I think the caller has absolutely right."

Poniewozik, not to be mistaken for a conservative – who worked for the left-wing website Salon.com before his hiring at Time -- explored the Imus issue and its strange lack of standards in comparison to rap or movies like Borat, but the weirdest passage was when he used the word "conservative" in the same sentence as "Jon Stewart," which is word play at its loosest:

Punditry and gonzo comedy have become less and less distinguishable. (And I'm not talking here about The Daily Show, whose host Jon Stewart is, ironically, one of the most conservative defenders of the idea of sober, evenhanded news — see his 2004 tirade against Tucker Carlson.)