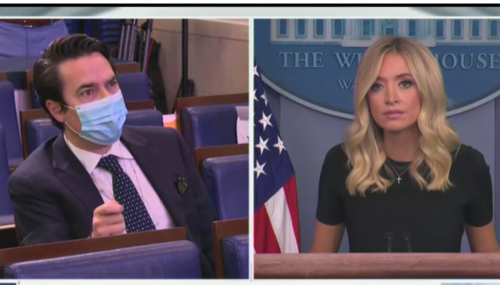 Tim Graham
On May 27, the American death toll from coronavirus sunk into the six figures: 100,000 lives lost. That’s a very sad number, made sadder when we ponder that the virus prevents loved ones from saying goodbye in person, and makes any funeral an extremely small event. So the nation's largest national newspaper made dramatic front pages, implying the losses were at least in part Trump's… 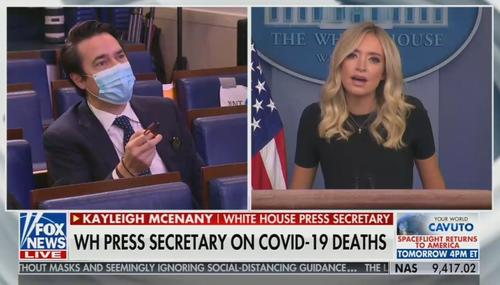 Curtis Houck
CNN political analyst and Politico writer Ryan Lizza decided during Monday’s briefing to follow girlfriend Olivia Nuzzi from April 27 and ask a snarky question about how many deaths would be acceptable to the White House in terms of President Trump’s reelection prospects. The only difference here was Nuzzi tried to trap Trump whereas Lizza’s verbal grenade was lobbed at… 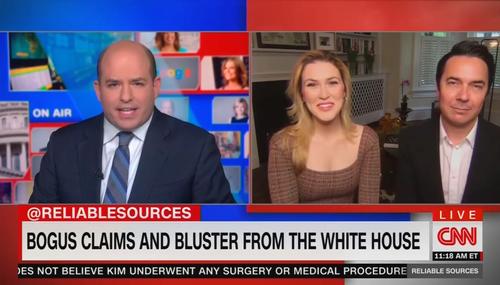 Tim Graham
On Sunday's Reliable Sources, CNN host Brian Stelter cued up New York magazine reporter Olivia Nuzzi to defend herself for asking Trump if he deserves re-election after he "lost" more Americans than died in the Vietnam War. Nuzzi's boyfriend Ryan Lizza of Politico claimed it's "never been the case" that reporters showboated in the briefing room. Has he never… Curtis Houck
Over the course of about 28 minutes of airtime (including commercials) following the President’s Fourth of July event A Salute to America, CNN’s The Situation Room put on one of the most disgraceful displays of liberal media bias, Trump hatred, and slights at America you’ll ever see. Attacking the President like bitter preschoolers, a cast of CNN personalities bashed the Trump… CNN's Mudd on Being Subject of Mueller Probe: 'I'd Wet My Pants'

P.J. Gladnick
Unhinged people can be counted on to deliver colorfully deranged quotes and on Tuesday night's CNN Tonight the reliably batty Philip Mudd, in his role as their counterterrorism analyst, did not disappoint. In reaction to the good news for President Donald Trump that Special Counsel Robert Mueller named him not a target but merely a subject for investigation, Mudd declared that subject… Nicholas Fondacaro
On Wednesday night, CNN continued its unholy and fact-devoid crusade to tar and feather every one of President Trump’s new high-profile government hires as nothing more than a clueless Trump stooge off the street or a Fox News personality. This time, their unfortunate target was Navy Rear Admiral Dr. Ronny Jackson hours after the President nominated him to be the new Secretary of the… Curtis Houck
CNN Tonight host Don Lemon trapped himself in a lie this week, falsely claiming that the Fox News Channel (or “Trump TV” in his mind) had never covered the White House resignation of Hope Hicks. He offered “apologies for that” on Thursday but it was anything but that as he channeled Dan Rather and Michael Wolff in arguing that the spirit of his lie was true. Brad Wilmouth
Over the past week, strict gun laws in Connecticut have been repeatedly touted on CNN as an example to be enacted nationally, with New Day host Alisyn Camerota pushing the laws the most frequently. The simplistic narrative has been promoted that there has been a "direct correlation" between the passage of new gun control in 2013 and lower numbers of homicides and violent incidents seen… Curtis Houck
While there have been only a smattering of climate change references since Hurricane Harvey took over news cycles, CNN and MSNBC featured more shameful exploitations of the hurricane on Monday to promote climate change as thousands were in need of help from rising flood waters. ‘Kudos to the German Journalists’; CNN Gushes Over German Questioners

Curtis Houck
On Friday afternoon, a slew of CNN personalities could barely contain their approval with the German journalists who questioned President Trump, swooning how they exclusively stuck to the wiretapping claims and should be given “kudos” for their questions from the left. Nicholas Fondacaro
Late Tuesday evening, MSNBC’s Rachel Maddow sent out an enticing tweet declaring that she would expose newly authenticated copies of President Donald Trump’s 2005 tax returns. As her show aired and the White House put out their official statement, it became clear that the hype was much to do about nothing. The revelation that Trump made roughly $150 million and paid $38 million in… Nicholas Fondacaro
In their two-hour-long documentary, The Legacy of Barack Obama, Wednesday, CNN allowed former Obama adviser Fareed Zakaria to set his sights on Congressional Republicans as he claimed their opposition was fueled by a deep-seated racism. “That fierce, unrelenting opposition, would haunt the next eight years and what began as whispers is now discussed openly,” he pontificated as ominous… Curtis Houck
For weeks, the liberal media have been dismissing in all mediums nearly any questions being raised about Hillary Clinton’s health as conspiracy theories. Even after she admitted to not remembering a whole host of important details in her July 2 FBI interview about her e-mail scandal, the media stayed on message in denouncing concerns as illegitimate. Brad Wilmouth
Appearing as a guest on Sunday's CNN Newsroom with Poppy Harlow, CNN political commentator and New York Times columnist Charles Blow became the latest example of liberals accusing Republicans of racism when they talk about helping black Americans solve problems that they are disproportionately affected by, as he asserted that recent efforts by the Donald Trump campaign at "outreach…