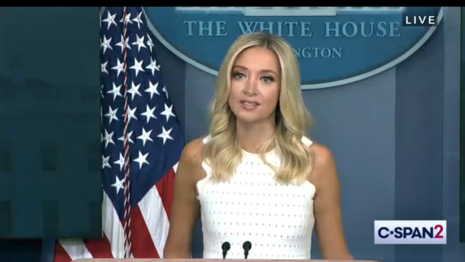 The July 6 Washington Post carried a typically colorful headline on top of the Style section. “A binder full of bombast: Kayleigh McEnany plays her boss and his base with derisive news briefing walk-offs.”

Media reporter Paul Farhi wrote McEnany’s “would-be smackdowns seemed so orchestrated” they only lacked some kind of musical flourish, like the opening witticisms leading into the theme song on the crime drama CSI: Miami.

McEnany flourished again later that day, noting “I was asked probably 12 questions about the Confederate flag. This President is focused on action and I'm a little dismayed that I didn't receive one question on the deaths that we got in this country this weekend.” She wasn’t asked “about New York City shootings doubling for the third straight week, and over the last seven days shooting skyrocket [sic] by 142 percent.” Reporters groaned and protested.

For analysis of this tactic, Farhi turned to Ryan Lizza, the chief Washington correspondent for Politico. Lizza said these mic-drops create delight for Trump and “the universe of Trump-friendly websites” who turn these commentaries into clips “for the MAGA-sphere.” That’s true. McEnany’s commentaries are great clickbait for people who want to see arrogant reporters get a dose of their own medicine.

But is Lizza really an objective observer? He then claimed “We used to have this quaint idea that the press secretary wasn’t just a mouthpiece for the president, that half of the job was serving the press and the public...That model is gone now. Now it’s almost pure theater, and [she’s serving] the negative partisanship that drives all else.”

Lizza isn’t being honest. Because he represents “pure theater”and “negative partisanship” from the other side of the exchange. He asked McEnany this beanball question on May 26, repeatedly: “We’re about to cross the 100,000-dead-American milestone… on Election Day, what does the White House view as the number of dead Americans where you can say that you successfully defeated this pandemic? Is there a number?”

Recently, Lizza asked her, facetiously: “Does President Trump believe that it was a good thing that the South lost the Civil War?”

Lizza’s live-in girlfriend, Olivia Nuzzi of New York magazine, beat him to the sleazy punch when she asked Trump on April 27: “If an American president loses more Americans over the course of six weeks than died in the entirety of the Vietnam War, does he deserve to be re-elected?”

This kind of question is performance art. It’s a look-at-me spectacle, a Jim Acosta bump-and-grind. There’s nothing “quaint” about it.

Farhi closed out this article with the expertise of Jennifer Mercieca, described merely as “an associate professor at Texas A&M who specializes in rhetoric and public affairs.” She claimed McEnany’s “leave-taking behavior” points to “how adversarial the relationship between the press secretary and the press is at present. The abrupt ending signals a lack of respect for the press, especially after she has berated their reporting.”

The Post didn’t note that Mercieca has a brand-new book out about Trump called Demagogue for President. Its dust-cover promises she will show “how a bombastic pitchman emerged as America’s authoritarian P.T. Barnum, using nothing more than his weaponized words to transform a polarized and dispirited nation into his own reality TV show.”

This would seem to signal a lack of respect for the president, or the ringmaster/dictator, in her overactive imagination. This book sounds like quite a “binder full of bombast.” But The Washington Post is pretending that political bombast is a one-way street....like no one ever reads their front page.