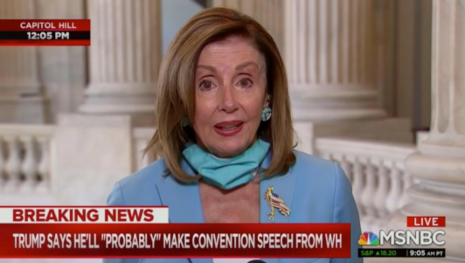 Just hours after the GOP kicked off its 2020 convention on Monday, House Speaker Nancy Pelosi came out swinging while calling President Trump and his fellow Republicans “enemies of the state.”

Journalists simply yawned at the California Democrat’s remark even though they had provided considerable coverage regarding comments from Trump and Congressional Republicans when he used the term “enemy of the American people” to describe the press in 2017.

According to an article posted on Tuesday by Tobias Hoonhout, media reporter for National Review Online:

Pelosi, appearing Monday with Ayman Mohyeldin of MSNBC, said that Republicans were “enemies of the state” during a discussion over election security amid a Congressional debate over additional funding for the Postal Service.

Trump has repeatedly claimed that the November election could be “rigged” and crippled by “fraud” ahead of an expected surge in mailed ballots.

“We take an oath to protect and defend the Constitution from all enemies, foreign and domestic,” the Speaker noted. “And sadly, the domestic enemies to our voting system and honoring our Constitution are right at 1600 Pennsylvania Avenue with their allies in the Congress of the United States.”

Republicans quickly denounced those remarks. Not that you would know it from the press. “I was shot because of this kind of unhinged rhetoric,” House Republican Whip Steve Scalise stated.

[This] allegation of treason … has only been picked up by Fox News, the New York Post and other conservative outlets.

Politico’s heralded “Playbook,” which curates the day’s stories, didn’t mention the incident. CNN, the New York Times, the Washington Post, NBC News and others in the mainstream have also failed to provide coverage.

“The same outlets,” he noted, “devoted countless news reports and opinion columns to Trump’s use of similar rhetoric -- albeit against the media and not his political opposition in 2017.” As you probably expect, Trump’s first use of the term “enemy of the people” to describe the press, led the media to quickly defend themselves.

Ryan Lizza summed up her side of the argument by stating. “There are a lot of people who are not stable out there, and when they see a president … calling a certain segment of the population ‘the enemy,’ it can encourage someone to do something stupid.”

Will Pelosi or any other Democrat use any more “unhinged rhetoric” during this week’s Republican convention? Check back with NewsBusters to find out.