Politico: Defending Kavanaugh's Right to Eat in Peace Is a Culture War 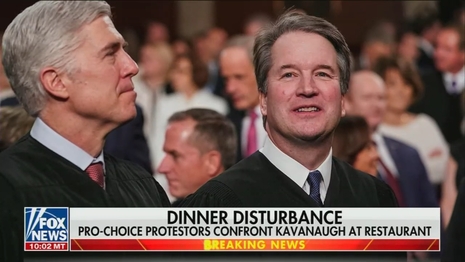 In Saturday's Politico Playbook newsletter written by Rachael Bade, Eugene Daniels, and Ryan Lizza, the leftwing outlet claimed Morton's Steakhouse waded into the culture wars by issuing a statement in support of Justice Brett Kavanaugh's right to eat dinner in peace at their restaurant.

On Friday, it was widely reported that Kavanaugh was forced out of Morton's Steakhouse in downtown Washington D.C. after a mob of pro-abortion protesters swarmed the front of the restaurant and demanded the restaurant kick him out. Kavanaugh subsequently left through the back exit after eating his meal.

After the incident, Morton's issued a statement which triggered these liberal journalists:

Honorable Supreme Court Justice Kavanaugh and all of our other patrons at the restaurant were unduly harassed by unruly protestors while eating dinner at our Morton’s restaurant. Politics, regardless of your side or views, should not trample the freedom at play of the right to congregate and eat dinner. There is a time and place for everything. Disturbing the dinner of all of our customers was an act of selfishness and void of decency.

"When a corporation is getting grilled on social media, there’s a lot at stake. The best course is often to say nothing, lest you butcher the response. Issuing a statement can often just inflame things because, let’s be honest, press releases are a medium rarely well done" Playbook wrote. "Morton’s The Steakhouse learned that the hard way this week when it steered right into the middle of the culture wars."

No bias here! According to Politico, Morton’s steakhouse was “steer[ing] right into the middle of the culture wars” by issuing a statement that one of their patrons has a right to eat dinner in peace. pic.twitter.com/NU0ZdslhZC

Apparently its a culture war for a restaurant to defend the right of their patrons to eat in peace and not be bullied by an angry mob, and forced out of the establishment.

Of course, they didn't take issue with Congresswoman Alexandria Ocasio Cortez (D-NY) when she took to Twitter to mock Kavanaugh and Morton's desire to have a peaceful atmosphere in the restaurant.

Of course, according to Politico, it's not a culture war to want a conservative justice to be harassed while he's eating because he disagrees with you on abortion. It's only a culture war when you fight back against the left's terrorism.

Politico is not a reputable news outlet. They are a far-left propaganda tabloid and should be treated as such.